Growing up in Australia, Markus Zusak would ask his mother and father–post–World War II immigrants hailing from Germany and Austria, respectively–to tell him the same stories about their lives over and over. Zusak’s own stories have been in print since his first novel, The Underdog, was published in 1999. But it was his 2005 global YA hit, The Book Thief, inspired by threads of those family tales, that made him a literary sensation. “Sure, we’re made of biological, physical things, but what really makes us is our stories,” says the author, 43, speaking on the phone from his home in Sydney. “If you took our stories away from us, there wouldn’t be much left.”

In Bridge of Clay, Zusak’s sixth book, it’s stories that bind the five rowdy Dunbar brothers together in the wake of devastating loss. Their mother, who escaped the East bloc (a nod to the histories of Zusak’s in-laws), is dead. Their father has abandoned them. In a complex narrative that leaps through time and place and across oceans, Zusak paints a vivid portrait of the brothers trying to regain their balance by keeping their family’s story alive.

At the center of the novel is Clay, the fourth brother and the only one who agrees when their father suddenly returns one scorching Australian summer to ask for help building a bridge over a dry riverbed in the country. To Clay, the bridge represents an opportunity to rebuild his family and to atone for the mysterious role he played in its tragedies. For Zusak, Clay’s efforts were a metaphor for how he himself thinks about writing–as an endeavor that must be made, no matter how it turns out. “You always want to make something beautiful and perfect,” he says, “but even before you begin, you know that you have to do it anyway.”

Bridge of Clay is Zusak’s first release since The Book Thief, which sold 16 million copies worldwide and was made into a film starring Geoffrey Rush and Emily Watson in 2013. That novel’s massive success raised the stakes for his next book. “The door opens really wide when something like that happens. All this light comes through,” he says. “But a bit of darkness comes through as well.”

Zusak came up with the idea for the story in Bridge of Clay more than 20 years ago but didn’t start writing until after he published The Book Thief. He spent more than a decade drafting and rewriting Bridge of Clay; for six years, it was narrated by a character whom the author eventually cut completely from the story. But certain fundamentals were in place from the start. The Dunbar brothers were always a rough-and-tough bunch, prone to expressing themselves through physical violence–a depiction of masculinity that has increasingly come under the cultural microscope. “You spend 13 years working on a book,” Zusak says, “and in that time, you change and the world changes.”

Bridge of Clay doesn’t shy away from the ways in which young men can be brutal, but it’s ultimately hopeful. “I wanted the brothers to have moments of beauty, love and loyalty–but I also wanted to show those rougher edges,” he says. “I wanted to write boys both in the way that they are and in the way that we would like for them to be.” 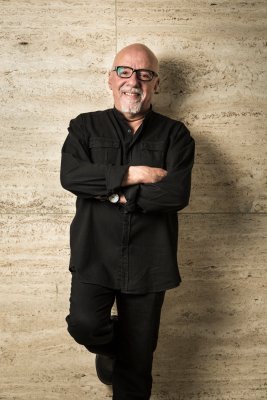 Why Best-Seller Paulo Coelho Thinks Books Should Never Be Made Into Movies
Next Up: Editor's Pick