Robert Redford didn’t break the Watergate scandal. But he played one of the guys who did, in All the President’s Men. He has also never run for public office. But he played a guy who did, in The Candidate. And he has never robbed a bank, though in his new movie, The Old Man & the Gun, he delighted in playing a real-life character who did so dozens of times and who, when he did get caught, managed 18 prison escapes–and attempted many more. “Normally, when you think of people robbing banks, you think of villains,” Redford said, during a relaxed meeting at the Hôtel Plaza Athénée, the day after the film’s New York premiere. “This was just the opposite. This was a guy who was happy, just having a great time–not doing this for a living, just living life.”

If you consider the types of roles that have attracted him and take into account his longtime environmental activism, you wouldn’t be wrong in thinking of Redford as a guy with sturdy principles. But having principles doesn’t always mean following the rules: you can’t change the world, or have any fun, without breaking a few. Redford’s film career–not just as an actor but also as a producer and director–spans some 50 years. His directorial debut, 1980’s Ordinary People, won Best Picture that year, and he took home the Best Director prize too. In 1981, he cemented his commitment to independent filmmaking by founding the Sundance Institute. His devotion to environmental causes is just as strong: he has been a trustee of the Natural Resources Defense Council since 1975, and in 2015 he made an impassioned appeal at the U.N. Climate Change Conference in Paris. He has written op-eds, in the Washington Post and in the pages of TIME, protesting the agenda of then EPA head Scott Pruitt.

But before this serious-minded, hardworking guy was anything, he was a kid growing up in what he describes as “a sort of lower-working-class environment” in Los Angeles. As a teenager, he hung out with a group of guys who often got into trouble. “We were very rebellious, and we made fun of conventional things,” Redford said of his high school crowd. “But I was fortunate enough to outgrow them, and I think one of the reasons I did was because I left the city and I left the United States.” Before he fell into acting, Redford’s ambition was to be a painter. “I wanted to be in Paris, I wanted to be in Spain. So when I was about 19, I saved up enough money to last me for a year. That experience is what really changed my life, because I then saw the outside world.”

Up to that point, Redford notes, California politics were dominated by people like then Senator Richard Nixon and Governor Earl Warren. “To me they were just boring guys in suits,” he says. “When they talked, nothing registered with me. So I just paid no attention to them. But they had power.” Redford’s time away changed his view of the world and of his home country. “When I went to Europe, I understood more about politics and about human nature. So when I came back, I was very critical of the politics of my own country. And I think that’s what led, eventually, to the activism.”

Redford’s love of nature was born earlier. He contracted polio at age 11–it wasn’t a severe case, the sort that would require being placed in an iron lung, but it did mean weeks of bed rest. As a kid, he’d never been out of Los Angeles. But after his recovery, as a reward for the ordeal he’d been through, his mother took him to Yosemite National Park. “There’s a mile-long tunnel when you leave Fresno, Calif. You come out the other end, and suddenly, there’s Inspiration Point. There in front of you is Yosemite National Park and all the magical beauty of that area–it looks like it was sculpted by God.” He was so awestruck that he ended up working at the park for three summers. “That’s when I became not only aware of nature but almost addicted to nature in its purest form.”

Now it’s as if that landscape has somehow found its way into Redford’s very being. At 82, he’s trim and agile, with hair somewhere between gray and blond, like striated layers of sandstone. He doesn’t look 82, but he doesn’t look 62 either; he looks no-age, that mythical ideal only some human beings achieve, his face not easily placeable in any era or even any century. At one point he wedged a slight break in the conversation to ask where I was from. I couldn’t imagine that this information could possibly be interesting to him. But he listened, alertly, to the answer and then expanded upon it with another question. Typically, that’s a tactic of shy people, a way of momentarily distracting attention from themselves. But unless Redford completely fooled me, he seemed genuinely curious in that quicksilver, of-the-moment way: Here’s a new person, one who’ll be around only for the next 30 minutes or so. Why not find out a few things while we’re here?

That kind of curiosity has led to some of his most enduring projects. As a publicity stunt to promote The Candidate, in 1972, Redford embarked on a short whistle-stop campaign tour, during which he had time to talk with both entertainment and political reporters. “The entertainment press was all hung over, and they were sleeping because they’d had so much to drink the night before,” he says. But the members of the political press were gossiping, tuned in to recent events like the Watergate break-in, which had happened just a few weeks earlier. Redford asked the reporters why the incident hadn’t received more attention in the news. They described Nixon’s “switchblade mentality,” his vindictiveness. The reporters said that their newspapers feared reprisal. It upset Redford that the President could have such power over the press.

Shortly thereafter, he returned to his home in Utah and, while reading the Salt Lake Tribune, noticed “a little, teeny blurb,” with a “dual byline,” offering more information related to the break-in. Other stories followed, and Redford kept track. He went to great lengths to contact the men attached to that dual byline, Bob Woodward and Carl Bernstein, who, out of fear of wiretapping, at first refused to take his calls. But he persisted, eventually securing the film rights to their story.

Does Redford believe that this Administration will get its comeuppance, as Nixon’s did? “I do,” he says. “History does repeat itself. I used to think it was stationary, but no longer.” He’s not sure exactly how it will happen–“It could be similar, that they disintegrate by their own hand”–but he has faith that it will.

Meanwhile, Redford persists in, if not breaking the rules, at least bending them. In recent months, the press made much of his claim that he’d be retiring from acting after The Old Man & the Gun. Now he isn’t so sure. “I think I made a mistake [talking about retirement], which I regret. Because that became the story,” he says, when his intention had been to celebrate the film, its cast and its director, David Lowery. He may not act again, or at least not soon. But he does plan to do more directing–and more painting and drawing. “Once I got diverted into acting, that took up all my time. And also, nobody pays an artist! Nobody pays a painter. But I missed it.” If Redford is a rebel, he’s the practical sort. But now, to paraphrase a line from The Old Man & the Gun, he’s not talking about making a living. He’s just talking about living. 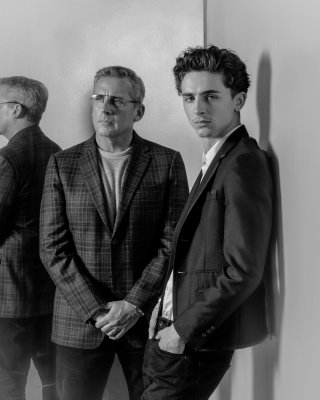 Addiction Is Hard to Talk About. That’s Why Steve Carell and Timothee Chalamet Wanted to Make Beautiful Boy
Next Up: Editor's Pick