Top members of the Philippine military are making sweeping claims that militant communists have infiltrated the country’s leading places of learning.

The Philippine Daily Inquirer quoted Brig. Gen. Antonio Parlade Jr. as saying Wednesday that the New People’s Army (NPA), the armed wing of the Communist Party of the Philippines (CPP), was trying to recruit students at 18 campuses in the country’s capital, including those of the prestigious University of the Philippines, De La Salle University, and Ateneo University.

Communist agents were showing videos of human rights atrocities to students, to incite them “to rebel against the government,” and casting Philippine president Rodrigo Duterte “as the new Marcos,” said Parlade, the military’s assistant deputy chief of staff for operations. He was referring to the late dictator Ferdinand Marcos, who ruled the Philippines from 1965 to 1986.

Parlade’s remarks were played down by a statement Thursday from the Armed Forces of the Philippines (AFP), which conceded that its allegations against several tertiary institutions were “subject to continuing validation.”

Nevertheless, tensions remain high given Duterte’s recent claims that the NPA was planning to assassinate him and the rebel group’s ongoing insurrection, which has claimed an estimated 30,000 lives since the 1960s.

Duterte had initially appointed several leftist lawmakers to his cabinet in an attempt to boost peace negations with the communists, but formally ended talks last November amid deadly skirmishes between soldiers and the NPA.

Parlade’s claims came a day after General Carlito Galvez, the AFP’s Chief of Staff, warned Philippine Senators that universities had become recruiting grounds for a “Red October” plot to overthrow the government.

However, Galvez denied Duterte’s claim that he was the target of a so-called “yellow-red” plot between the opposition Liberal Party (LP) and the CCP.

“It’s important that the military chief struck down Duterte’s yellow-red plot conspiracy theory,” author and analyst Richard Heydarian tells TIME. He praised the military for its “institutional independence despite the constant political pressure” and described it as “quite paradoxically, a pillar of democracy under Duterte’s rule.”

Marcos used plots against him to justify military rule. A series of bomb attacks Marcos attributed to communists preceded his declaration of martial law in 1972, under which thousands of activists and university students were tortured, jailed, and killed. NPA membership also swelled over that period, from 60 members in 1969 to a peak of about 25,000 in 1987, according to military estimates.

Though he recently ruled out nationwide martial law for the Philippines, Duterte has frequently threatened to declare it in the past, particularly if he meets with opposition to a bloody war on drugs that has seen thousands killed.

Duterte’s talk of “destabilization” — one of his favorite themes — has also escalated in recent weeks.

In September, he accused allies of Senator Antonio Trillanes IV, whose amnesty he controversially revoked, of conspiring with the CPP and members of the Liberal Party to overthrow him. He also challenged the army to stage a coup d’etat.

Nona al-Raschid, a 20-year-old participant in demonstrations commemorating the 46th anniversary of the imposition martial law on Sept. 21 1972, told TIME earlier that claims of an NPA threat were “fear mongering.” 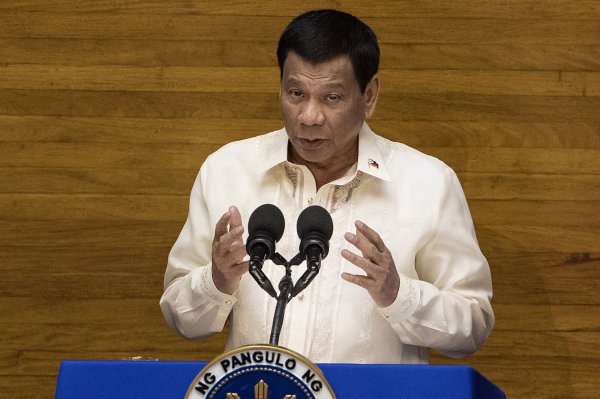