People Have Plenty to Say About the First Presidential Alert

On Wednesday afternoon FEMA conducted its first test of the the nationwide Presidential alert and social media was full of mixed reactions.

The Presidential Alert is similar to the state-level systems that let police and local authorities send out AMBER Alerts and weather warnings. The biggest difference is it’s scale. At 2:18 p.m. 225 million smart phones in the United States received a Presidential Alert. It featured a loud alarm, followed by vibration that lasted around one minute, and required no action.

On screens far and wide, it read:

News of the Presidential Alert test drew immediate criticism on some corners of social media – with some people vowing to turn off their phones, believing wrongly that they will be a captive audience of President Donald Trump. Some even mused – incorrectly – that the system would allow him to tweet to every American.

The test seemed to go off without a hitch and reactions ranged from anger about receiving an unwanted message from Trump to confusion and concern when phones did not receive an alert.

It was clear that some, like Jimmy Kimmel Live! Jimmy Kimmel host, had already planned their Presidential Alert “reaction” posts.

MORE: 225 Million Phones Just Received a Presidential Alert. No, It Was Not a Text From President Trump

Wednesday’s test was meant to assess the readiness to distribute an emergency message nationwide, and determine whether there are improvements to be made, according to FEMA. The test was is also meant to allow officials to find a way to reach more people, including those who do not have access to smartphones. 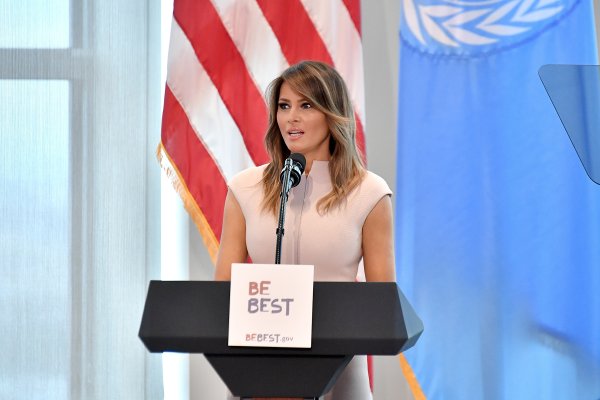 Melania Trump Donated 'Be Best' Blankets to Mothers in Ghana
Next Up: Editor's Pick