Timothee Chalamet on a Call Me By Your Name Sequel: “Armie and I Are 1000% In”

Timothée Chalamet is, well, busy. When I sit with him to talk about his new film Beautiful Boy, for which he’s already earning Oscar buzz, he’s just returned from Hungary, where he was in production on Netflix’s The King opposite Robert Pattinson and Joel Edgerton. Next he’ll star in Greta Gerwig’s upcoming remake of Little Women with Meryl Streep, Emma Stone and Saoirse Ronan. (He calls the script “awesome.”) But his most iconic role to date remains his performance as Elio in last year’s hit Call Me By Your Name, Luca Guadagnino’s adaptation of Andre Aciman’s beloved novel, which earned him an Oscar nomination and legions of fans. His co-star Armie Hammer has spoken previously about their plans to make a sequel, and now Chalamet says it’s very real—and he and Hammer are still tight.

“I was just on the phone with Armie thirty minutes ago,” Chalamet says. Hammer had just written a tribute to Chalamet for Variety, which Chalamet says had moved him to tears. “He always has a trick up his sleeve,” Chalamet says. “I was getting emotional. It was really one of the most beautiful things I’ve ever seen, especially coming from him.”

So what are the odds of the sequel actually happening? “I don’t see any world where it doesn’t happen,” Chalamet says. “I think Andre is comfortable with a sequel being made. I know Luca really wants it. And I know Armie and I are 1000% in.”

In terms of the story, Chalamet suspects it’ll pick up down the road, when Elio and Oliver are older. “I think it’ll be a couple of years later,” Chalamet says. “And I think that’s cool—to take advantage of the Boyhood style of storytelling. That isn’t done all the time.” 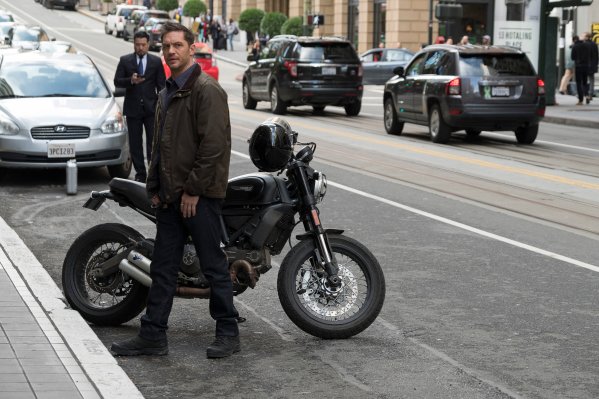 Review: Tom Hardy Is One Good Reason to See Venom
Next Up: Editor's Pick