Here's Why You Shouldn't Take a Sleeping Pill Every Night

Tens of millions of Americans struggle to sleep at night, and many of them turn to sleeping pills for relief. Prescription and over-the-counter sleep aids are especially popular among older adults. A recent study published in the American Journal of Geriatric Psychiatry found that roughly one in three adults ages 65 to 80 use these drugs at least occasionally to fall asleep, and OTC meds like Benadryl and Tylenol PM are the pills of choice for sleepless seniors.

Experts say this is concerning for a number of reasons. Studies have linked the regular, long-term use of OTC sleep medicines to some potentially serious side effects.

“Many OTC sleep aids—such as Benadryl and Tylenol PM—contain diphenhydramine,” says Dr. Donovan Maust, co-author of the recent study and an assistant professor of psychiatry at Michigan Medicine. Diphenhydramine is an anticholinergic drug, which means it blocks activity of a brain chemical called acetylcholine, which plays a role in muscle activation and also in brain functions like alertness, learning and memory, Maust says.

As a result of this blocking effect, these OTC drugs can cause constipation, confusion and other side effects, which Maust says may be more likely to affect older adults. For these reasons, the American Geriatric Society has deemed these drugs “generally inappropriate” for seniors.

The side effects of these OTC pills can also set off a “prescribing cascade,” says Jennifer Schroeck, a clinical pharmacist with the U.S. Department of Veterans Affairs Western New York Healthcare System and co-author of a 2016 review published in the journal Clinical Therapeutics on the safety of sleep aids among older adults.

For example, in men with prostate conditions, anticholinergic drugs can lead to urinary retention, or problems fully emptying the bladder, Schroeck says. A man experiencing this issue may not attribute it to the sleep medicine he’s taking at night to sleep, and if he fails to mention it to his doctor, he may be prescribed a new medication to treat his bladder problems. “That new drug may have side effects too, so then something else is added to manage those,” she says. In this way, the medications a patient is taking—and their many side effects—can add up quickly.

There is also growing worry about another more-serious risk associated with these OTC drugs. “Another concern for which evidence is growing is that long-term use appears to increase the risk of dementia—and the more use, the greater the risk,” Maust says.

One 2015 study published in JAMA Internal Medicine found that over a 10-year period, people who regularly took the amount of diphenhydramine found in two Benadryl or two Extra Strength Tylenol PM pills roughly once every week or two were at significantly increased risk for dementia. For individuals who took these drugs about once every three days (or more), their dementia risks rose by 54% compared to people who did not take these types of medications.

The links between these OTC drugs and dementia are far from certain. A more recent study from the UK turned up only “tentative” links, and its authors stated that more research is needed. “But the only way to 100% attribute a health issue to any specific treatment is through a randomized trial,” Maust says, referring to an experiment in which one group of people is given a drug and another is not. (To his knowledge, these studies are not being done.)

Prescription sleep aids carry their own risks. “There are new reports of side effects coming out on a yearly basis,” says Kari Mergenhagen, a clinical pharmacist and adjunct instructor at the University of Buffalo. (Mergenhagen was also a co-author on the Veterans Affairs sleep-aid study.) Headaches, dizziness, nausea, vomiting and hallucinations are a few of the short-term concerns associated with hypnotics—a class of prescription drugs designed to induce sleep that includes Ambien, Lunesta, Sonata and other popular meds, she says.

Mergenhagen says it’s very difficult for researchers to nail down the long-term risks associated with regular use of these drugs. One observational study published in 2012 in the BMJ looked at electronic medical records data from more than 30,000 adults and the usage of common hypnotics, including zolpidem (sold under the brand name Ambien and others), temazepam (Restoril), eszopiclone (Lunesta), zaleplon (Sonata) and other barbiturates, benzodiazepines and sedative antihistamines. The researchers found that those who were prescribed more than 132 doses of these hypnotic drugs per year—meaning those patients taking them at least every two or three days—had a 35% increase in cancer risk and a five-fold jump in risk of death compared to those not prescribed these drugs. Even people who took these drugs sparingly—like once every few weeks—were more likely to die than those who did not take them at all.

The authors of the study tried to control for pre-existing medical conditions and other factors that could explain why people taking these drugs died or developed cancer at higher rates than non-users. The drugs were also associated with car accidents, falls and depression—all of which could explain the elevated mortality risks. But the risks remained. The authors also found associations between the use of hypnotics and specific types of cancer—notably, lymphomas and cancers of the lungs, colon and prostate—but they did not offer any cause-and-effect mechanisms that might explain the links. More recent research, in both people and animals, has turned up more preliminary links to cancer.

The drugs are only meant to be used sparingly. The prescribing information for Ambien notes that the drug’s use should be “re-evaluated” if a patient’s insomnia persists after seven to 10 days of treatment—guidelines echoed by the makers of Lunesta. Both drugmakers define “long-term” use as anything beyond 28 days.

Even setting aside the potential risks and side effects, sleeping pills aren’t an effective long-term solution for insomnia. “The real question is, why aren’t you sleeping?” Schroeck says. Many older adults may take sleeping pills because pain, nerve problems or other health issues are keeping them up at night, she says. For these people, a sleeping pill is standing in the way of them finding a true remedy for the ailment.

Even for younger adults who can’t sleep because of stress, financial concerns or other sources of anxiety that are more difficult to treat, sleeping pills are a poor solution, she says. “Cognitive behavioral therapy should always be the first line of treatment,” she says. Other experts agree that cognitive behavioral therapy for insomnia—which can include strategies like establishing a consistent sleep routine, purposely restricting time spent in bed or practicing mindfulness-based meditation—is the best way to cure insomnia.

There’s still a time and place for prescription and OTC sleep aids. If you’re very stressed and need help nodding off the night before an important work or social event, these pills can be a big help. But if you’re taking them all the time—and especially if you’re older than 65—the risks these pills pose likely outweigh their benefits. 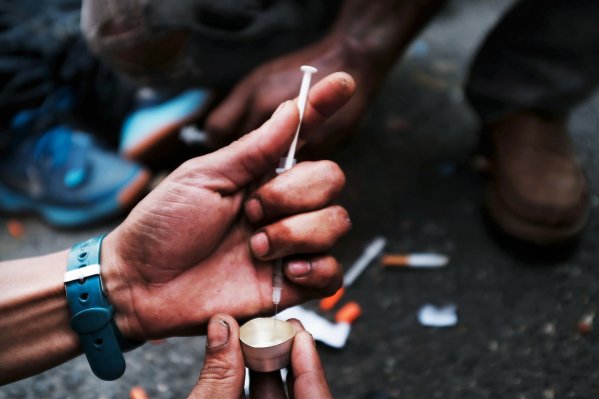 Bipartisan Opioid Bill Shows Congress Can Work Together
Next Up: Editor's Pick