Science Says You Should Embrace Hugging

When a loved one has a tough day, you probably give them a hug without a second thought. And a new study says that simple act may have a larger effect than you realize.

Hugs can have a measurable impact on mood and stress after social conflict, according to a paper published Wednesday in PLOS One. The gesture seemed to increase positive feelings and reduce negative ones on days when people experienced relationship problems, the study found.

“A very simple, straightforward behavior — hugging — might be an effective way of supporting both men and women who are experiencing conflict in their relationships,” explains co-author Michael Murphy, a post-doctoral researcher in Carnegie Mellon University’s Laboratory for the Study of Stress, Immunity and Disease.

For the study, Murphy and his colleagues interviewed 404 adults by phone every night for two weeks. Each person was asked about their mood, whether they had experienced conflict and if they had received a hug that day, among other questions. Each person also went through a physical exam and filled out a questionnaire about their health and social network at the beginning of the study.

Hugs, the researchers found, were associated with an uptick in positive mood markers and a reduction in negative ones; the opposite was true of relationship conflict. And on days when both occurred, people tended to report fewer negative feelings and more positive ones than on days when they experienced conflict but no hugs.

That trend was true regardless of gender, age, race, marital status, overall number of social interactions and average mood. It even carried over into the next day, although the drop in negative feelings was more pronounced on the second day than the increase in positive ones.

It stands to reason that social support would make somebody feel better in the throes of a stressful situation, but Murphy says there’s conflicting evidence in this area. On one hand, studies have found that people who perceive their social networks to be loving and supportive tend to fare better under stress. But, paradoxically, other studies have found that when people actually receive social support from friends or family members, it can make matters worse. This may be because people revert to counterproductive behaviors — like giving unsolicited advice, or jumping straight into problem-solving — when they try to support their loved ones, unintentionally making them feel incompetent or criticized, Murphy says.

More implicit shows of support, such as physical touch or doing someone a favor, might be better because they “make people feel like they’re cared about, that they have someone who’s there for them, but that doesn’t make any judgments,” Murphy says. And hugs might have a leg up even in this category: Research also suggests that physical touch can prompt beneficial physiological changes, such as reductions in stress-related brain and heart activity and the release of the mood-enhancing hormone oxytocin, Murphy says.

Of course, some people don’t like to be hugged, and even for touchy-feely folks, responses likely vary depending on who the hug comes from. Murphy’s study didn’t examine how distinctions like these affect people’s reactions to hugging, but he says he and his colleagues are working on another study that will include more granular questions, like whether the hug was explicitly wanted and who gave it.

Even though the current results are preliminary, Murphy says they provide a compelling reason to reach out, literally, to loved ones who may be struggling.

“Hugs, at least among close others, might be a simple, straightforward, effective way to show support to someone you care about who is experiencing conflict with a relationship in their life,” Murphy says. 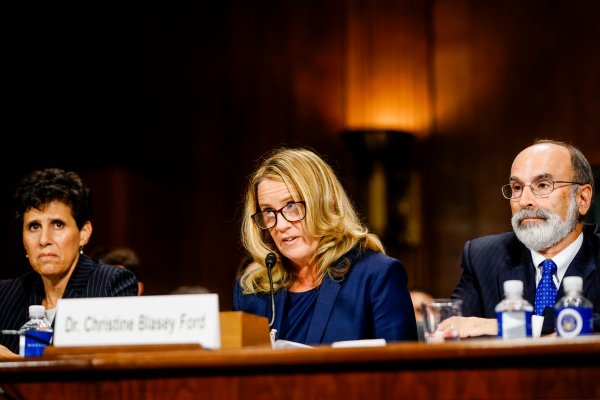 'Indelible in the Hippocampus Is the Laughter.' The Science Behind Christine Blasey Ford’s Testimony
Next Up: Editor's Pick