Landlocked Bolivia Wants a Path to the Pacific. Here's Why That Won't Be Happening Any Time Soon

A bay in Antofagasta, Chile, part of the coastline Bolivia once claimed
Getty Images
By Ciara Nugent

On Oct. 1, the U.N.’s International Court of Justice (ICJ) ruled against forcing Chile to negotiate giving up a slice of its territory to provide neighbouring Bolivia with a route to the sea. Gathered around giant screens in town squares in the capital La Paz, Bolivians watched with dismay. To them, the country’s landlocked status is a historical injustice and an affront to national pride. Here’s what to know about the history of Bolivia’s lost coastline:

When did Bolivia lose its route to the sea?

The dispute began in 1879, when Chile invaded the Antofagasta port city on its northern border with Bolivia as part of a dispute over taxes. Within four years Chileans had redrawn the map of South America by taking almost 50,000 square miles of Bolivian territory, including its 250-mile coastline on the southern Pacific Ocean. Bolivia accepted this loss in 1904, when it signed a peace treaty with Chile in return for a promise of the “fullest and freest” commercial access to port.

How did Bolivians react to being landlocked?

The country never forgot its dream of returning to the waters of the Pacific coast. Every year on March 23, Bolivians celebrate a national Day of the Sea. The dying words of Eduardo Abaroa, a Bolivian war hero shot down by Chile in the 1879-1884 border conflict, have become an iconic phrase: “Surrender? Your grandmother should surrender!”

Why does Bolivia have a navy?

Bolivia established its navy in 1963 as a “river force” using cast-off vessels from the U.S. and China. In 1981 they renamed it the “Armada Boliviana.” Without a sea to set sail on, its 5,000 troops make do with drills on the Amazon and Lake Titicaca. They also patrol Bolivia’s river borders with Brazil, Paraguay and Argentina.

Why did Bolivia take Chile to court?

The feud has created tensions between the neighbors, who have suspended full diplomatic relations since 1978. In 2013, Bolivia’s President Evo Morales filed a lawsuit at the ICJ, based at the Hague in the Netherlands, to force Chile to negotiate the handover of some of its land.

Bolivia’s representatives framed the suit partly as an economic matter; Bolivia has the second lowest per capita GDP of any South American country, while sea-hugging Chile has the second highest. Bolivia’s former president Eduardo Rodríguez Veltze told judges at the Hague that the country’s annual GDP growth would be 20% higher if it still had a route to international waters. “[It] would make a small difference to Chile, but it would transform the destiny of Bolivia,” he said.

Chile says it stuck to its 1904 promise — Bolivia enjoys duty-free port access, and its own customs station and storage facilities on the Chilean coast. But Bolivians say they still have to pay for transit to reach the port and that their goods are subjected to unfair Chilean checks.

How did Chile and Bolivia react to the ICJ’s decision?

Chilean President Sebastian Piñera celebrated the Oct. 1 ruling among a cheering crowd in Antofagasta and criticized Morales for creating “false expectations and great frustration” among his own people.

But Bolivia’s dream of restoring its access to the coast is not dead yet. “Despite the unjust report from the ICJ, the Bolivian people’s fight continues,” Morales said after the ruling. “We will never give up on our sovereign route to the sea.” 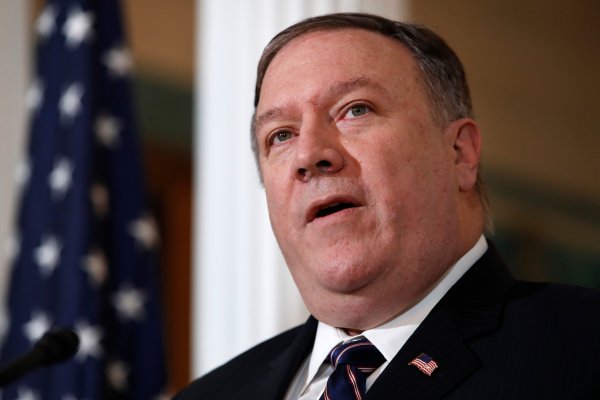 U.S. Tears Up Treaty In Latest Confrontation With Iran
Next Up: Editor's Pick