Fan Bingbing, one of China’s most popular entertainers, has been fined nearly $70 million for tax evasion, state media reported Wednesday in the first official announcement about the actress since she mysteriously disappeared in early July.

Fan was ordered to pay “hundred of millions” of yuan, Xinhua reported, without further details.

The tax authority’s notice was the first official mention in months of the 37-year-old actress, who vanished from the public eye amid bubbling controversy over tax evasion and inflated contracts in China’s entertainment industry.

Her disappearance is believed to be related to the May disclosure of a pair of film contracts on Weibo, China’s popular social media network. The contracts alleged that Fan exploited a double-billing system, known as “yin yang contracts,” to earn $7.5 million for a 2003 film while only paying taxes on $1.5 million.

Fan’s office has denied ever using such contracts.

But the actress published a statement Wednesday titled “letter of apology” on Weibo, where she has nearly 63 million followers. The post was her first since June 2.

“I am unworthy of the trust of the society and let down the fans who love me,” Fan wrote, promising to “try my best to overcome all difficulties and raise funds to pay back taxes and fines,” according to the Associated Press. The post received over 70,000 comments and 400,000 reactions in the first hour after it was published.

The official secrecy around Fan and her sudden disappearance stirred speculation in Chinese tabloids that she was banned from acting or placed under house arrest.

Detention would be an extraordinary undoing of the globe-trotting actress, who recently crossed over into American cinema with roles in X-Men: Days of Future Past and Ironman 3.

Fan’s prolonged absence has also drawn attention to the lack of transparency in the Chinese judicial system, as well as to government censorship and control over the film industry. 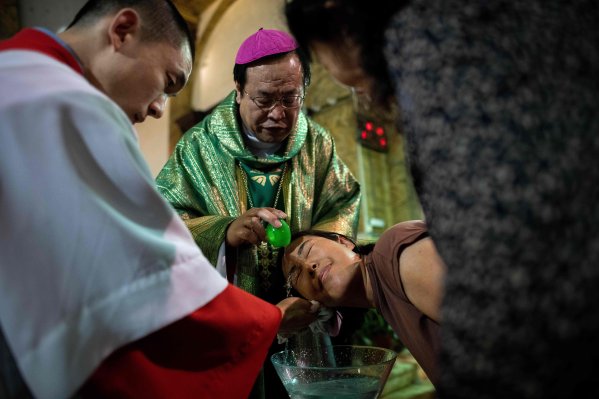 China and the Vatican Reach a Deal in the Battle Over 'Underground Bishops'
Next Up: Editor's Pick