The Battle Over Brett Kavanaugh Has Ended. But the Pain His Hearing Triggered Has Not

Since #MeToo went viral, survivors have been inundated with stories of sexual assault and harassment on a weekly — and for some stretches, daily — basis. But nothing had evoked memories and pains of past traumas in some survivors, and particularly women, as much as the respective testimonies of Dr. Christine Blasey Ford and Judge Brett Kavanaugh. Senators, television personalities and people across the country heard stories from loved ones that they had never been told before. The Rape, Abuse and Incest National Network (RAINN) saw a 388% increase in traffic on its hotline from the Thursday of the hearing to the following Sunday. That Friday was the busiest day in the organization’s 24-year history. No other single #MeToo moment appeared to precipitate that sort of deluge.

Survivors with histories of sexual abuse are at higher risk of exhibiting PTSD symptoms whenever a #MeToo story hits the news, according to Freyd. But such allegations are often blips in the 24-hour news cycle. The Kavanaugh story dragged on, with an apparent strain on many survivors that the Harvey Weinstein and Bill Cosby allegations did not inspire — and it will continue to do so as he takes his seat on the Supreme Court. Experts say that all that has happened could have lasting effects on the psychology of many victims of sexual assault.

“When there’s a national disaster, there’s a period of aftermath,” says Dr. Jennifer Freyd, a psychology professor at the University of Oregon who specializes in studying trauma among survivors of sexual violence. “I think it’s going to be like that. I think we’re talking about a big national health crisis.”

For the last decade, Freyd has focused her research on institutional betrayal, when a survivor feels an organization that is supposed to protect him or her, in the end, causes further harm. Freyd focuses specifically on survivors who are ignored or even called liars by the universities, corporations or governmental bodies where they lodge their accusation of harassment or assault.

One study of military veterans who had not only experienced sexual assault during their time in the service but whose claims had been dismissed or worse by their superiors in the military, published in the Journal of Clinical Psychology in 2016. The veterans not only exhibited PTSD symptoms but had increased odds of attempting suicide. “So we’re talking life and death sometimes here,” says Freyd.

Dr. Christine Blasey Ford’s story affected some survivors who had not relived their own rapes or assaults when reading or listening to other prominent allegations of sexual misconduct in the news. One woman in New York, who requested anonymity because she has not yet shared her story of assault with her family, remembered the sexual abuse she suffered as a child for the first time in decades as she watched Ford’s testimony. “Here is a respectable woman with a family,” she said. “This could have been my teacher in school. That could have been anybody.”

Though for many survivors, Kavanaugh’s enraged response was more likely to bring them back to the moment when an assailant has attacked them than Ford’s testimony. While other people who have been accused of similar crimes have quickly departed the spotlight (even if they denied the allegations), Kavanaugh, who himself denies Ford’s allegation that he sexually assaulted her when they were in high school as well as the other allegations of sexual assault against him, sat behind the same desk as Ford to respond — with an indignation that stood out from the lawyer-approved statements that accused men usually issue. Survivor advocate Alisa Zipursky says that watching Kavanaugh cry and claim victimhood brought up personal memories. “My abuser did that to keep me there,” she says. “He brainwashed me into thinking that he was the victim. And I’m reminded of that emotional abuse.”

For Sahar Azi, who works in public policy in Oakland, another concern was how little survivors’ pain-filled reactions to the testimonies — on social media and at protests in Washington — seemed to change. Her experience of Kavanaugh’s confirmation brought to mind her childhood in Iran. “I’ve lived in places where women aren’t equal, but here, we’re always allowed to fight back,” she said. “It felt like this time we weren’t allowed to challenge them.”

With Kavanaugh now confirmed to the court, it may feel to some people as if the story has concluded. But that may not be the case for survivors. In fact, for those who shared their stories and fought his nomination, his ascension could worsen their symptoms PTSD, anxiety or depression. Karestan Koenan, a Harvard professor who researches PTSD in assault and rape victims, said that Kavanaugh’s confirmation will make many survivors feel as if sharing what happened to them had no impact. She explained, “speaking out and feeling invalidated — or worse, shamed — can be devastating and make all the reactions worse.” 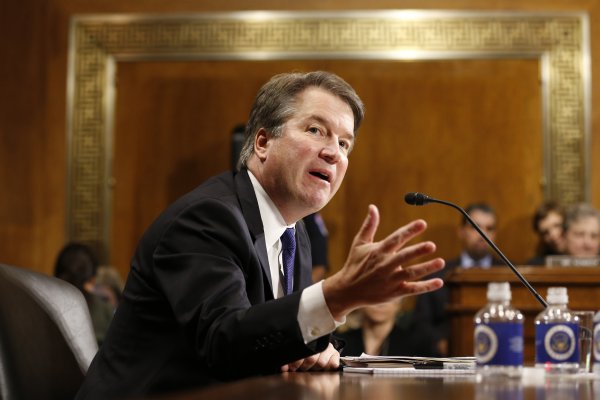 The Response to the Kavanaugh Allegations Exposes the Lessons We Failed to Learn from the Catholic Clergy's Abuse
Next Up: Editor's Pick