Physicist Donna Strickland, a self-described “laser jock” who prefers to keep a low profile, won the Nobel Prize in physics Tuesday, becoming the third woman ever to do so — an achievement she described as “surreal.”

“It’s hard for me to take it in right now,” Strickland tells TIME. “But I’m trying to enjoy it.”

An associate professor at the University of Waterloo in Ontario, Canada, she spent the morning fielding emails from around the world, visiting with students who showed up at her door with congratulations, and discussing the Nobel Prize-winning research that she completed in 1985 as a 26-year-old graduate student.

“It’s kind of mind boggling, isn’t it?” Strickland says. “It’s not like I was thinking, ‘Oh, somebody should give me a Nobel Prize.’ It’s sort of surreal.”

Strickland is the first woman to win a Nobel Prize in any category since 2015. And she is just the third woman to ever win a Nobel Prize in physics. Marie Curie, who researched radioactive substances and remains the only woman to win two Nobel prizes, won the prize for physics in 1903. Maria Goeppert-Mayer, who discovered the nuclear shell structure and worked unpaid for many years, followed in 1963.

But Strickland’s achievement comes a day after an Italian physicist was suspended from CERN, the European Organization for Nuclear Research, for saying that physics was “invented and built by men.”

“I wonder what Marie Curie would have thought of that,” Strickland says. “It’s a silly comment. Obviously, over the history of certainly the last 300 years, it was that men went out and worked, and women stayed home. Yes okay, that’s the way it was. But certainly it isn’t that women weren’t able to do it.”

“Maria Goeppert-Mayer, you know, she didn’t even get paid to be a scientist. And yet, she was doing Nobel Prize-winning work. How ridiculous is that? I do not have to go through what they went through because there were women out there paving the way for us. Certainly things are changing all the time,” says Strickland, who cited Goeppert-Mayer’s work in her thesis. “It will keep improving, hopefully. The fact that people are even outraged by what was said at CERN says that things are different.”

The CERN controversy — and the overall lack of female Nobel winners — has highlighted the obstacles that women often face in science fields, particularly in physics. Statistics show that women earn an even smaller percentage of bachelor’s degrees in physics (20%) than they do bachelor’s degrees in science, technology, engineering and mathematics (STEM) fields more broadly (35%).

“I think more and more people are realizing that it can’t even just be women that keep saying, ‘We need this,'” Strickland says. “Men have to get on board, and the majority of men are absolutely on board, so sometimes it’s just inertia.”

Strickland says she has not yet spoken to Gérard Mourou, her doctoral adviser and the physicist with whom she shares the Nobel Prize. “We’ll find some way to celebrate together,” she says.

Their article, published in 1985, formed the basis of Strickland’s doctoral thesis at the University of Rochester. She said she has never worked harder or had more fun than she did on their project. “We did seem to be on the cutting edge of laser science, and I think we were all aware of that,” she says. “I’ve done other work that I’m very proud of and that is fun to think about and to do. Is it going to get me another Nobel Prize? Probably not.”

Strickland and Mourou also share the prize with Arthur Ashkin, who invented “optical tweezers that grab particles, atoms, viruses and other living cells with their laser beam fingers.”

Using what the Royal Swedish Academy of Sciences described as an “ingenious approach,” Strickland and Mourou “succeeded in creating ultrashort high-intensity laser pulses without destroying the amplifying material.” The technique, known as “chirped pulse amplification,” is used today in millions of corrective eye surgeries, among other applications.

Strickland says she had unsuccessfully pursued several other research projects while completing her Ph.D. — “a lot of wrong turns” — before landing on the one that has now earned her the Nobel Prize.

Asked what she would tell herself at that age, she said: “Hang on for the ride. I think that’s what I would say. It’s been an excellent ride. I’ve had a great career.” 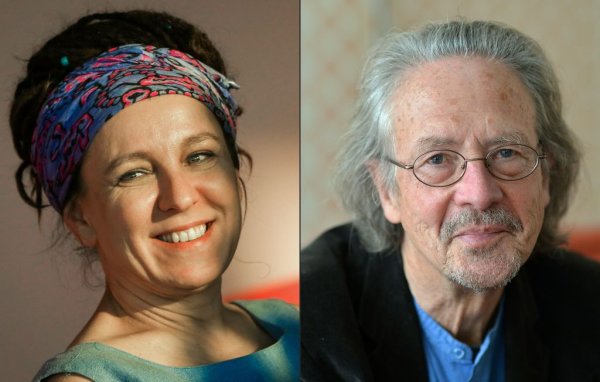 What To Know About the Literature Nobel Prize Winners
Next Up: Editor's Pick