A Chinese Warship Nearly Collided With a U.S. Destroyer in an 'Unsafe' South China Sea Confrontation

A Philippine Navy personnel mans a .50 caliber machine gun during the bilateral maritime exercise between the Philippine Navy and US Navy innear waters claimed by Beijing the South China Sea on June 29, 2014.
Noel Celis—AFP/Getty Images
By Eli Meixler

A Chinese warship sailed within yards of a U.S. Navy destroyer in an “aggressive maneuver” that risked collision, a U.S. official said. The close encounter forced the American vessel to change course as it was passing contested islands in the South China Sea, a sail-by that angered Chinese counterparts amid an escalating standoff between Beijing and Washington.

The USS Decatur was conducting “freedom of navigation” operations on Sunday when it passed 12 nautical miles off reefs in the disputed Spratly Islands.

China’s defense ministry said Tuesday that it dispatched a naval ship to warn the U.S. vessel to leave, calling the operation a threat to its sovereignty, according to Agence France-Presse. Beijing claims all of the remote island chain amid its vast territorial assertions throughout the South China Sea.

But according to the U.S., the Chinese Luyang destroyer approached the Decatur in “an unsafe and unprofessional maneuver” that required evasive actions.

The Chinese ship conducted “increasingly aggressive maneuvers,” that brought it “within 45 yards of Decatur’s bow, after which Decatur maneuvered to prevent a collision,”U.S. Pacific Fleet spokesperson Commander Nate Christensen said.

The U.S. regularly conducts FONOPS, or freedom of navigation operations, in disputed seas around the world to challenge “excessive” maritime claims. But China perceives the voyages as a provocation.

Read more: Aboard the USS Carl Vinson in the South China Sea

Bilateral relations have come under additional strain after President Donald Trump initiated a trade war that has enraged Beijing. Last week, President Trump’s latest installment of tariffs targeting $200 billion of Chinese goods came into effect, with the threat of an additional $267 billion if China retaliates.

On Monday, Mattis downplayed the hostilities, saying that Washington and Beijing will “sort this out.”

“There’s tension points in the relationship, but…we do not see it getting worse,” Mattis told reporters. 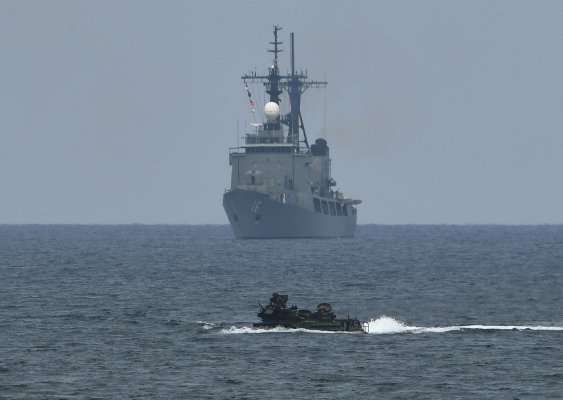 U.S. Warship Sails Near South China Sea Amid Tensions
Next Up: Editor's Pick