Night School Graduates to the Top of the Weekend Box Office

Tiffany Haddish and Kevin Hart teamed up to top the box office this weekend in the Universal Pictures comedy “Night School.”

The feature collected an estimated $28 million from theaters in the U.S. and Canada, ComScore Inc. said in an email Sunday. It beat two other wide releases, including the Warner Bros. animated picture “Smallfoot,” which opened in second place, and the horror film “Hell Fest” from Lions Gate Entertainment Corp., which landed in sixth.

Haddish has been on the rise since last year’s surprise hit “Girls Trip” and helped delivered a sizable opening for a film with a modest production budget. This month, she won an Emmy award, her first, for hosting “Saturday Night Live.” Both actors are likely to tap into a largely underserved African-American audience that producer Will Packer successfully targets.

In “Night School,” Hart is one of several troublemakers forced to attend adult classes for his high-school-equivalent degree. Haddish plays his hard-driving teacher.

The movie from Comcast Corp.’s film division cost $29 just million to make, before marketing costs, according to Box Office Mojo, and was expected to take in $25 million to $30 million in its first weekend. Critics didn’t approve, with only 27 percent giving positive reviews, according to aggregator RottenTomatoes.

“Smallfoot,” the first major animated film to open in two months, delivered sales of $23 million, missing the $25 million forecast from Box Office Pro. The movie cost about $80 million to make. The film, from AT&T Inc.’s newly acquired Warner Bros. division, was more warmly received by critics, with 74 percent recommending it, according to Rotten Tomatoes.

The movie flips the legend of Bigfoot, focusing on a yeti who sets out to prove humans really exist. Channing Tatum provides the voice of Migo, the bright, young yeti who tries to upend his community’s conventional wisdom. The rapper Common and TV host James Corden provide some of the other voices.

“Hellfest,” from Lions Gate and CBS Films, took in $5.1 million, in line with Box Office Pro’s forecast of $5.6 million. It had a budget of $5.5 million, before marketing costs, according to Box Office Mojo. The R-rated film is about a masked serial killer who terrorizes a horror-themed amusement park. 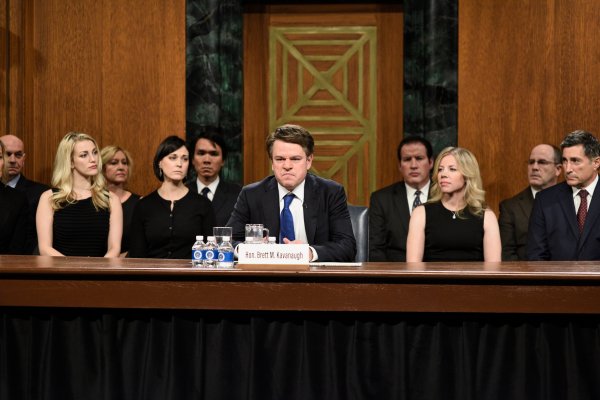 Matt Damon Plays a Belligerent Brett Kavanaugh on 'SNL'
Next Up: Editor's Pick