President Trump Says He and Kim Jong-Un 'Fell in Love'

President Donald Trump said he and North Korean leader Kim Jong Un “fell in love” over the course of their on-again off-again detente, hours after Pyongyang’s top diplomat said there was “ no way” the country would disarm under current conditions.

“He wrote me beautiful letters,” Trump said of Kim Saturday during a rally in Wheeling, West Virginia. “And they’re great letters. We fell in love.”

Trump has made repeated efforts to flatter Kim, even as talks aimed at ending Pyongyang’s nuclear program sputtered following the two leaders’ landmark June summit in Singapore. Kim and Trump are actively planning a second summit, but there are still signs that the talks haven’t advanced.

Speaking at the United Nations General Assembly on Saturday, North Korea’s top diplomat said the nation won’t dismantle its nuclear weapons until it has “sufficient trust” in the U.S., and called on the Trump administration to drop its “coercive methods” such as sanctions.

The remarks by North Korea Foreign Minister Ri Yong Ho underscored lingering friction between the nations, even as they plan a second Trump-Kim meeting.

Earlier this week, Secretary of State Michael Pompeo said he had a “very positive meeting” with Ri, and agreed to visit North Korea next month to prepare for another summit.

At the UN, North Korea repeated its request to the U.S. to declare the end of the 1950-1953 Korean War, which ended with a cease-fire but without a peace treaty. Skeptics of Kim’s motivations worry that the U.S. might withdraw troops from South Korea and that UN sanctions could be lifted if the war is declared over. North and South Korea see declaring the end of the war as a key to building trust between the U.S. and North Korea. 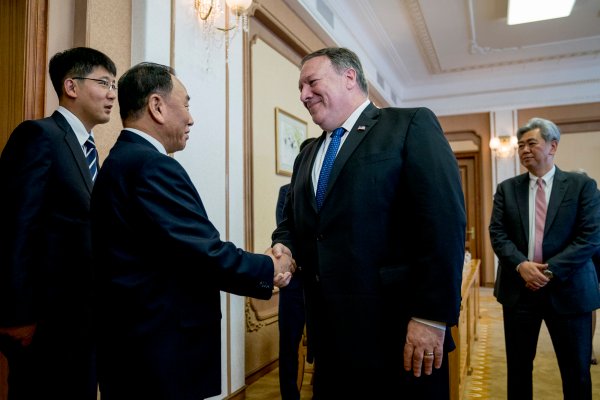 Mike Pompeo to Visit North Korea for Denuclearization Talks
Next Up: Editor's Pick