With the midterms just 37 days away, President Donald Trump sought to boost Republican turnout with a return to the aggressive, theatrical rallies he held on the campaign trail in 2016.

Speaking to a raucous audience in Wheeling, West Virginia, Saturday night, Trump called Democrats “the party of crime,” joked that he and North Korean dictator Kim Jong Un “fell in love” and sought to put the confirmation hearings of Supreme Court nominee Brett Kavanaugh on the front-burner.

“We see this horrible, horrible, radical group of Democrats. You see what’s happening right now,” Trump told the crowd, referring to Democratic efforts to block the nomination of Kavanaugh following explosive allegations from a California professor that he sexually assaulted her as a teenager. “You see the meanness, the nastiness. They don’t care who they hurt, who they have to run over to get power.”

Political forecasters currently give Democrats high odds of retaking the House of Representatives, while Republicans have the advantage in the Senate. But the fight over Kavanaugh has given some in the White House new hope of energizing the conservative grassroots. On Saturday, Trump sought to heighten that intensity further with an hour and 20 minute rally dedicated to some of his greatest hits, leavened with some new attack lines.

The music blared John Denver’s “Take Me Home, Country Roads,” as Trump slowly walked out to the lectern, basking in the roaring crowd cheering over the cranked up arena sound system. During his speech, the crowd chanted “build the wall” when he brought up immigration and “lock her up,” when Trump mentioned Hillary Clinton.

In the speech, he painted the Democrats as a party that doesn’t support law enforcement, wants to restrict access to guns and would allow illegal criminal aliens into the country.

“The Democrat Party is radical socialism, Venezuela, and open borders. It’s now called, to me, you’ve never heard this before, the party of crime,” Trump told thousands of supporters packed into the WesBanco Arena.

Trump mocked Sen. Dianne Feinstein of California, accusing her of leaking the accusations made confidentially to Feinstein by psychology professor Christine Blasey Ford. Ford came forward publicly after her name was circulated to reporters. Feinstein denied being the source and responded to Trump on Twitter, saying her actions were “consistent” with Ford’s wishes.

“The entire nation has witnessed the shameless conduct of the Democrat Party,” Trump said.

At a press conference on Wednesday, Trump avoided directly arguing that Ford was lying, choosing instead to argue that it was a “dangerous time” for young men in this country. “In this case, you’re guilty until proven innocent,” he said. But Trump has shown restraint in talking about Blasey Ford in recent days, calling her a “very credible witness” and a “very fine woman” after her hours of riveting testimony before the Senate Judiciary Committee and acquiescing to demands from key Republican senators for the FBI to take a week to investigate her allegation.

On Saturday night, Trump instead focused his energy on praising Kavanaugh, calling him “one of the most accomplished legal minds of our time.” Kavanaugh’s testimony on Thursday showed the country “the brilliant and really incredible character, quality and courage of our nominee for the United States Supreme Court,” Trump said.

With Republicans holding the Senate by a razor-thin margin, Trump told the arena he needed them to vote on Nov. 6 to unseat West Virginia’s Democratic Sen. Joe Manchin. He introduced Manchin’s Republican challenger Patrick Morrisey, who has been inching up in the polls behind Manchin. Morrisey, Trump said, is “a person who will give us a vote for what we want every single time.”

Many supporters in the crowd work in the steel and agricultural industries in West Virginia and believe Trump’s actions have improved the economy and his steel tariffs have increased jobs. “He’s a man of action,” said Timothy Pesta, 61, who works for a steel company and grows corn and wheat on a family farm, and has seen his economic fortunes rise in the past year. Pesta said he understands why Trump evokes such a polarizing response.

“People aren’t used to that kind of radical change,” he said. 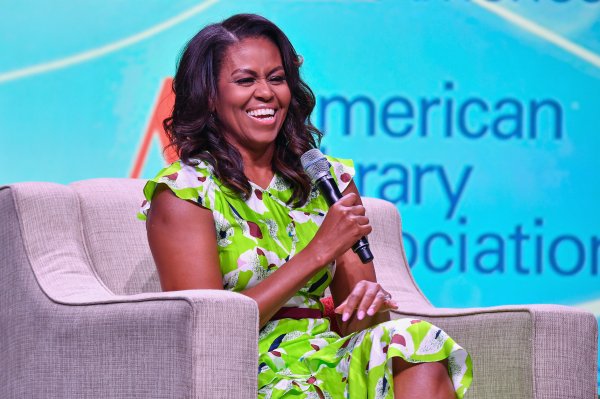 Michelle Obama Continues Push to Get People to the Polls With New PSA
Next Up: Editor's Pick