Republicans are pushing to quickly confirm Supreme Court nominee Brett Kavanaugh after a full day of testimony from Kavanaugh and Christine Blasey Ford, who has accused the judge of sexually assaulting her when the two were in high school. Kavanaugh denies the allegation.

It appears that the GOP may not yet have the necessary 50 Senators to confirm Kavanaugh, and a small group of Senators remain undecided. But Republican leaders have appeared confident and said they would move forward with the process.

The Senate Judiciary Committee voted Friday afternoon to bring Kavanaugh’s nomination to the full Senate floor after Arizona Republican Sen. Jeff Flake made a dramatic shift in his position, first saying he would support Kavanaugh’s nomination, and then saying he could only support the nomination pending an FBI investigation. Flake voted for Kavanaugh’s confirmation to go to the Senate floor on the condition that the full vote could be delayed a week to allow the FBI to investigate Ford’s allegations.

Shortly after Flake and the rest of the Senate Judiciary Committee voted on Friday, Sen. Joe Manchin of West Virginia and Sen. Lisa Murkowski of Alaska joined Flake’s request for a delay. This request will now need to go to President Donald Trump, who has the authority to order an FBI investigation, and to Senate Majority Leader Mitch McConnell, who controls the floor procedures.

Here are the key Senators whose decisions could make or break Kavanaugh’s confirmation.

Collins is one of a few moderate Republicans who has remained undecided about Kavanaugh. She supports abortion rights, so many have viewed her as a potential obstacle for the nominee. But after meeting with Kavanaugh over the summer, Collins said she was confident he viewed the Roe v. Wade abortion decision as “settled law.”

Collins was seen meeting with Sen. Lisa Murkowski, Flake and Democratic Sen. Joe Manchin after Kavanaugh’s hearing on Thursday. But she has kept her views quiet this week and has not said how she will ultimately vote.

Like Collins, Murkowski has been one of the most-watched swing votes. She joined Flake on Friday in calling for a delay of the vote to confirm Kavanaugh pending a limited FBI investigation.

But even before the sexual assault allegations against Kavanaugh, Murkowski was also under pressure from constituents who had concerns about Kavanaugh’s view of Alaska natives’ rights. The Alaska Federation of Natives, a large statewide organization that has backed Murkowski in the past, said earlier this month it “strongly” opposes Kavanaugh because of his “views on the rights of Native peoples.”

But since the allegations against Kavanaugh have come out, Murkowski has also said they must be taken seriously. “We are now in a place where it’s not about whether or not Judge Kavanaugh is qualified,” she told The New York Times on Monday. “It is about whether or not a woman who has been a victim at some point in her life is to be believed.”

The retiring Senator is another key name on this list. He went through several changes on Friday as he first released a statement Friday morning saying that he would vote to confirm Kavanaugh, and then after looking agonized throughout the morning Senate Judiciary Committee meeting, came back in the afternoon to say that he would only vote to send Kavanaugh’s confirmation to the Senate floor if the FBI could conduct an investigation this coming week.

“I think it would be proper to delay the floor vote for up to but not more than one week in order to let the FBI do an investigation, limited in time and scope to the current allegations,” Flake said during the afternoon meeting. “And I will vote to advance the bill to the floor with that understanding.”

Shortly after releasing his initial decision on Friday morning, Flake was confronted by two women who said they were sexual assault survivors. They said his vote was “telling all women that they don’t matter” and demanded he look at them. He appeared visibly uncomfortable and quickly went into the Senate Judiciary Committee meeting.

Corker, who has previously been critical of President Donald Trump, also went from a swing vote to a supportive vote for Kavanaugh after Thursday’s hearing.

“While both individuals provided compelling testimony, nothing that has been presented corroborates the allegation,” Corker said in a statement. “There is no question that Judge Kavanaugh is qualified to serve on the Supreme Court, and in a different political environment, he would be confirmed overwhelmingly.”

Manchin, who is up for re-election in a state that President Trump won by 42 percentage points, is one of a group of red state Democrats who have had trouble making up their minds on Kavanaugh. He was undecided about his vote after Thursday’s hearings, but on Friday said he would support Flake’s call for a delayed vote and an FBI investigation.

“I applaud Senator Flake’s decision to rise above the partisan circus on display during this entire process. It took courage to take a stand and call for a one-week FBI investigation to get to the bottom of the allegations against Judge Kavanaugh,” Manchin said in a statement. “It is what is right and fair for Dr. Ford, Judge Kavanaugh and the American people.”

Donnelly is another Democrat in a similar position to Manchin — up for election this November in a red state. However, Donnelly announced Friday morning that he would vote no on Kavanaugh.

“I have deep reservations about Judge Kavanaugh’s nomination to this lifetime position and, as I stated, we have been unable to get all the information necessary regarding this nomination, despite my best efforts,” he said in a statement. “While I would gladly welcome the opportunity to work with President Trump on a new nominee for this critically important position, if Judge Kavanaugh’s nomination comes before the full Senate for a vote under these circumstances, I will oppose it.”

Tester, also representing a red state, had said that the allegations against Kavanaugh were one of several issues he wanted to look at about the nominee. He also released a statement on Friday saying he would not vote to confirm Kavanaugh.

Heitkamp faces one of 2018’s most challenging re-election campaigns and is one of the few Democrats who previously voted for Gorsuch. When the allegations about Kavanaugh surfaced, she said they should be “thoroughly investigated.”

“It takes courage for any woman to speak up about sexual assault, and we need to respect Prof. Ford by listening to her and hearing her story,” the Senator said on Sept. 17.

Since the Thursday hearing, she has been quiet about her views and her vote remained unclear as of Friday. 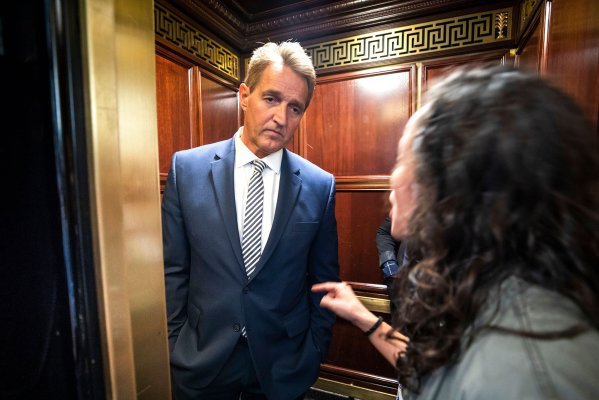 Protestors Confront Flake After He Announces Kavanaugh Vote
Next Up: Editor's Pick