Populism takes many forms. One of them is political use of public anger over corruption. At the moment, a striking number of leaders are using corruption investigations of their predecessors to advance needed reforms. Here, five leaders benefiting from the aftermath of impunity:

While the Argentine President struggles to keep his country’s economy upright amid a broader emerging currency crisis (the Argentine peso has lost roughly half its value since January), the country remains mesmerized by the unfurling “notebook” scandal, centered on a driver for a Planning Ministry official who kept a notebook with detailed records of more than $50 million in bribes he delivered on behalf of his boss between 2007 and 2015. Mauricio Macri, who came to power in 2015 on a pro-business platform, is not implicated in the unfolding drama; his predecessor Cristina Fernandez de Kirchner very much is. Earlier this month, Argentine investigators raided her homes, and she was officially indicted on corruption charges on Sept. 17.

At the moment, Macri is busy dealing with the politically toxic (at least for Argentinians) International Monetary Fund (IMF) to secure a new financial lifeline to manage its currency woes, as well as attempting to reform and reignite Argentina’s economy. The country’s recent difficulties have certainly hit Macri’s popularity (his approval rating is hovering at around 40 percent), but for the moment the corruption drama—and the lack of immediate credible political alternatives—gives him room to breathe ahead of elections next year.

South African President Jacob Zuma’s corruption woes have been thoroughly documented over the years—at one point, he had nearly 800 charges pending against him. Many of those charges stem from his alleged ties to the Gupta family, three brothers accused of strategically using their relationship with Zuma and his family to secure government contracts and appoint government officials willing to back their business interests. Although both Zuma and the Guptas deny any wrongdoing, Zuma was forced from office by his own political party, and the Gupta brothers have fled the country. There are rumors that Zuma is planning to follow suit.

Zuma’s successor Cyril Ramaphosa has worked non-stop to boost investor confidence in his country after a decade of economic mismanagement by Zuma. The mere fact that he’s not Zuma helps a lot, but so does his genuine commitment to economic reforms, underscored by his selection of pro-reform officials to key posts in his government. Strengthened by his anti-corruption push, his approval rating is in the low 70’s heading into elections next year.

Peru has an abysmal history when it comes to presidential corruption, one largely intertwined in recent years with the rise and fall of the Brazilian construction giant Odebrecht. That name should sound familiar—the kickbacks Odebrecht has offered politicians and other public officials across the continent in exchange for government contracts is the driving force behind Brazil’s sprawling Lava Jato corruption probe. Multiple Peruvian presidents have come under scrutiny for ties to Odebrecht, and they haven’t been helped by the company’s admission that it paid out nearly $30 million in bribes to Peruvian officials between 2005 and 2014 for contracts worth $12.5 billion in total.

Earlier this year, Pedro Pablo Kuczynski resigned from the presidency following a scandal over past connections with Odebrecht and attempts by his political allies to negotiate public works projects in exchange for their vote not to impeach him. Kuczynski was replaced by his first vice president Martin Vizcarra, who currently enjoys a 45 percent approval rating (Kuczynski left office at 15 percent). Much of his popularity is tied directly to the reform package he has proposed to congress, which include tougher campaign finance laws, new regulations for appointing judges, and banning the re-election of legislators; that popularity helped him win a vote of confidence from the opposition-dominated congress earlier this month. For the short-term at least, that ensures Peru some much-needed political stability.

Angola’s current president took office in September 2017, making him only the second president the oil-rich African nation has had in nearly 40 years. Joao Lourenco rose through the ranks of the People’s Movement for the Liberation of Angola (MPLA) party, the dominant political force in Angolan politics; until this month, the party was led by Jose Eduardo dos Santos, who also served as president from 1979 to 2017. Under dos Santos, corruption in the country was rampant—Transparency International ranked Angola the 167th least-corrupt country in the world out of 180 total in 2017.

Lourenco has wasted little time shaking things up, particularly by squeezing the patronage network dos Santos set up over his near-four decades in power. Since taking over Angola’s presidency, he has ousted dos Santos’ daughter from her post overseeing Sonangol (Angola’s state-owned oil firm), and this week saw the arrest of dos Santos’s son (who ran Angola’s sovereign wealth fund) for suspected graft. Lourenco has also begun enacting reforms long-requested by the IMF (like devaluing the currency and streamlining government spending) to shore up the country’s finances and attract more foreign investment.

This won’t come cheap—the IMF also wants the government to remove fuel subsidies and reform pension policy, particularly for military personnel. These will be unpopular moves, but the hope is that the popularity of Lourenco’s seemingly genuine anti-corruption drive will give him the space he needs to take the harsh-but-necessary steps his predecessor avoided for decades.

In 2009, Malaysian President Najib Razak established the 1MDB state investment fund as a means of boosting Malaysia’s economic development. According to prosecutors, the fund also boosted Najib’s personal economic development—Najib is accused of funneling more than $680 million from 1MDB into his personal bank accounts. Before the scandal broke, Najib’s UMNO party had been in power for 60 years… which made its loss in May 2018 genuinely shocking. Adding to the political drama, he lost elections to his predecessor-turned-opponent Mahathir Mohamad, aged 92, who was roused from retirement by Najib’s blatant corruption. As of August 2018, Mahathir had an approval rating of 71 percent.

But Mahathir’s anti-corruption drive is also having serious geopolitical ramifications. Among his most notable decisions has been to cancel two major infrastructure projects with China; partly because he’s worried that the projects would leave Malaysia with un-repayable debt, and partly because there are concerns the deals were signed with Najib to help hide illicit cash flows from 1MDB. Anti-corruption is going global, in more ways than one. 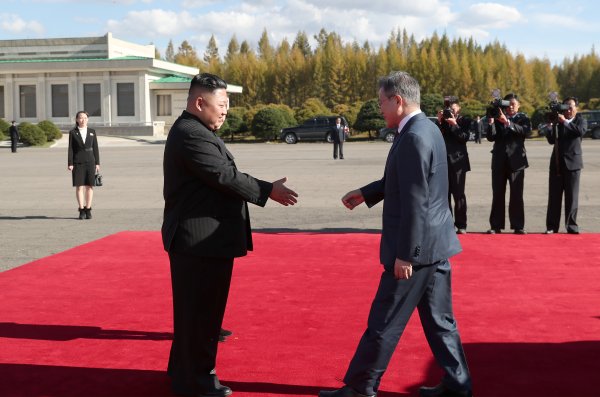 5 Big Questions About the North and South Korea Talks
Next Up: Editor's Pick