Even if Brett Kavanaugh is confirmed as a Supreme Court justice, he will carry scars from the brutal process to get him there.

During passionate and angry testimony on Sept. 27, Kavanaugh shouted, “My family and my name have been permanently and totally destroyed.” His fate isn’t yet assured. But as he limps over the finish line, with the FBI now looking into sexual assault allegations against him before a full Senate vote, the question could soon shift from whether he will be confirmed to what kind of justice he will be.

Will Kavanaugh, who denies all of the sexual misconduct allegations, dig in on the far right, radicalized by the experience? Will he swing the other way towards the middle, determined to improve his reputation among women? Or will he be able to move past it entirely?

“When nominees dream of a confirmation as the ultimate vindication of a lifetime of service, these controversies leave a lasting sense of injury rather than celebration,” says Jonathan Turley, professor at the George Washington University Law School.

In the past, other judges who went through bruising experiences have reacted in different ways. In 1987, Robert Bork’s nomination to the Supreme Court was infamously defeated because of his ideology — at his own hearing, Kavanaugh even said he thought he’d be in for a “a good old-fashioned attempt at Borking.” Bork was so embittered and politicized by the experience that he resigned from his federal judgeship the following year. On the opposite end of the spectrum, Merrick Garland’s nomination to the high court in 2016 languished for a year as Republicans refused to hold hearings from him. Since he quietly returned to his federal judgeship and has seen now-Justice Neil Gorsuch take the seat he was up for, he has continued his work seemingly unaffected and has hardly said a public word about what happened.

Kavanaugh would be joining a colleague who went through the most similar experience to his own before joining the high court, and who may have become more inflexible as a judge as a result. Justice Clarence Thomas famously referred to his own confirmation process in 1991, during which Anita Hill accused him of sexually harassing her at work, as a “high-tech lynching.” People have speculated about whether Thomas’s reticence in personality on the court — he rarely speaks during oral arguments — or position on the far right of the bench ideologically were shaped by the Hill hearing.

“Clarence Thomas clearly has long harbored an sense of deep injury after his own confirmation controversy,” says Turley.

Carrie Severino, head of the conservative Judicial Crisis Network who clerked for Thomas in 2007, said the experience made him take an even more principled in his approach to the job. “He is so committed to making good on that oath that he took to uphold the Constitution, and I think maybe in part because it cost him so much,” she says.

Some see the partisanship Kavanaugh displayed during his hearing as evidence that he might go the Thomas route if he makes it to the Supreme Court. “This whole two-week effort has been a calculated and orchestrated political hit,” Kavanaugh said, “fueled with apparent pent-up anger about President Trump and the 2016 election, fear that has been unfairly stoked about my judicial record, revenge on behalf of the Clintons and millions of dollars in money from outside left-wing opposition groups.”

Blaming Democrats for his ordeal could be a sign that Kavanaugh would carry that anger to the high court and stay rigidly with the Justices nominated by Republican presidents. “What he said was so explicitly partisan, so permanently political, so grudge-bearing, that I don’t see how somebody puts on a new robe, goes to a new court and forgets about that,” says John Q. Barrett, professor at St. John’s University School of Law. “The public will never forget about that. This guy, if he’s going to be confirmed, will now be heckled and protested and a pariah for the rest of his life for a segment of the country.”

Others see signs that perhaps this experience, instead of making Kavanaugh more extreme, could moderate him, or could make him take extra care on cases involving women with an eye on his legacy. Sen. Susan Collins, a Republican from Maine and a key vote in Kavanaugh’s confirmation, said after talking privately with him in August that she does not believe he would overturn landmark abortion decision Roe v. Wade — a view she reiterated in September just before the hearing with Christine Blasey Ford, one of Kavanaugh’s accusers. And in his testimony during that hearing, Kavanaugh said that as part of administrative preparations for his possible confirmation, he has already hired the group of law clerks who would work for him in his first term on the Supreme Court. All four of them are women.

“If confirmed, I’ll be the first justice in the history of the Supreme Court to have a group of all-women law clerks,” he said. “That is who I am.”

For many women throughout the country now facing the specter of a Supreme Court that holds two men accused of sexual misconduct, that might not be enough. “It will raise questions about whether he could ever view any issue that touched on questions of sexual misconduct fairly, given what has happened,” says Melissa Murray, professor at New York University School of Law.

If he is confirmed, Kavanaugh will have the rest of his career to reckon with what happened on his way up and how it affected a divided nation. “Once an individual is confirmed to the court, the beauty of lifetime tenure is that they can set aside what’s happened during the confirmation process and really just go about the business of trying to get cases right,” says a source involved in Kavanaugh’s confirmation process.

“He knows that [it] is up to history to judge” his legacy, Turley says. “But the circumstances of his confirmation will remain an asterisk by his name.” 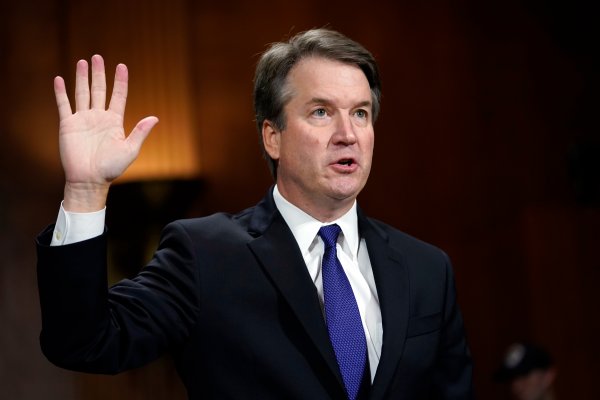