President Donald Trump on Friday ordered the FBI to reopen its background investigation into his Supreme Court nominee, Brett Kavanaugh, to examine the sexual misconduct allegations against the judge. The move came after Arizona Republican Sen. Jeff Flake made an unexpected move to delay Kavanaugh’s nomination process for up to one week before the full Senate votes on his confirmation.

Shortly after Flake made his decision and the Senate Judiciary Committee voted to advance Kavanaugh’s confirmation to the full Senate, Republican Sen. Lisa Murkowski of Alaska and Democratic Sen. Joe Manchin of West Virginia—both key undecided votes—said that they supported Flake’s call for a delay and a limited FBI investigation.

“I’ve ordered the FBI to conduct a supplemental investigation to update Judge Kavanaugh’s file,” President Donald Trump said in a statement on Friday, echoing the request from the Senate Judiciary Committee. “As the Senate has requested, this update must be limited in scope and completed in less than one week.”

The Senate agreed by voice vote to move ahead with Kavanaugh’s nomination on Friday night before recessing until Monday. The confirmation vote itself will be delayed for at least a week.

Both Kavanaugh and Mark Judge, who Christine Blasey Ford says was the only other eyewitness in the room when Kavanaugh allegedly sexually assaulted her, have agreed to cooperate with the FBI investigation. Ford’s attorney Debra Katz released a statement saying her client “welcomed” this step in the process, but pointedly said there should be no time limit imposed upon it.

Flake’s call for an FBI investigation capped off a frenetic day for the outgoing Arizona Senator and frequent Trump critic. His became the vote to watch in the Judiciary Committee as it was made clear he was the only undecided member of either party.

Flake emphasized after his vote that his goal in collaborating with Democrats Friday and pushing for a delay wasn’t necessarily to change any votes, but to restore integrity in the process.

“It was awful,” Flake said when describing the agony over his decision. “What I really wanted to do was meet with some of my Democratic colleagues and say … ‘What could we do to have a better process?’”

Flake’s move came mere hours after his office sent out a statement Friday announcing his support of Kavanaugh and just five minutes before the committee was slated to begin its first meeting of the day. Shortly after Flake’s announcement, on his way to the meeting, he was confronted by two women who said they were sexual assault survivors. “Look at me and tell me that it doesn’t matter what happened to me, that you will let people like that go into the highest court of the land and tell everyone what they can do to their bodies,” one of the women, Maria Gallagher, told the Senator.

Later in the day, Flake declined to say the protesters caused his change in tactics, instead saying there were many factors involved.

Flake went into the Judiciary Committee meeting knowing that he was backed by Collins and Murkowski, who also supported a weeklong delay to allow for an FBI investigation. Both of those Senators have praised the committee’s decision.

Flake was among the last Senators to enter the committee room where the meeting was being held. He took his seat looking distraught, with his hands clamped and his brows furrowed. At one point, he was complimented by his colleague, South Carolina Senator Lindsey Graham, who mentioned how Flake had been “wrestling” with this decision. His expression remained unchanged.

Then, about an hour into the meeting, Flake left the room. He popped back in again, but the majority of his colleagues gave remarks while he refrained from doing so. His absence was not so noticeable at first, overshadowed by the exits of Democratic Senators Kamala Harris, Mazie Hirono, and Richard Blumenthal, who left in protest after the afternoon vote was scheduled. As the Democrats exited, Republican Sen. Chuck Grassley of Iowa tried to read a statement but was drowned out by the commotion and sounds of photographers capturing the leaving Senators. “I can tell people are irritated,” he said, and deferred to the ranking member, Sen. Dianne Feinstein.

But within an hour, it was clear that Flake’s absence meant something unexpected may be afoot. As Senators from both parties kept leaving, and returning to whisper among themselves and aides, it was apparent that they were engaging in backroom discussions over the vote. At one point, the lawmakers said, every Senator on the committee was engaged in the discussions. This notion was reaffirmed when 1:30 p.m. ET — the scheduled time for the original vote — rolled around, and Grassley, the committee chair, simply sat at the table with his hand on his cheek. Twelve minutes later, Grassley headed back into the chamber where the discussions were taking place. He finally called the committee to order 20 minutes behind schedule, and yielded to Flake, who explained that his decision to advance the vote to the floor hinged on a weeklong delay and an FBI background check. There was some confusion among the Senators, but they then voted along party lines to advance the vote to the full Senate.

“I think Senator Flake has done us all a favor — the Senate, the Judiciary Committee, and the nation,” sad Illinois Senator Dick Durbin, the Democratic Whip. “It’s the right thing to do and I applaud him.”

While Flake’s Republican colleagues were careful not to publicly disavow him, some expressed doubt that an FBI investigation would provide any clarity. “He has been concerned about our due diligence to get to the bottom of this dispute, but what I’ve tried to persuade him of is in 36 years it’s impossible to resolve this in a way that will provide complete clarity,” said Republican Texas Sen. John Cornyn.

The committee’s vote Friday afternoon on Kavanaugh’s nomination came just one day after a marathon hearing that featured the testimony of Christine Blasey Ford, who accuses Kavanaugh of sexual assault, and Kavanaugh’s own fiery denial of the charge. Speaking in the Oval Office on Friday, Trump said he found Ford’s testimony “compelling” and “credible,” and that he was pleased with Kavanaugh’s testimony as well. He also said Senators considering the nomination should do what they think is right. “They have to be comfortable with themselves,” he told reporters, adding “whatever they think is necessary is O.K.”

Ford had told the committee Thursday that Kavanaugh assaulted her while they were teenagers at a party more than three decades ago. Two other women, Deborah Ramirez and Julie Swetnick, have come forward with their own allegations. Kavanaugh has denied all allegations of sexual misconduct and angrily defended himself during his portion of Thursday’s hearing. 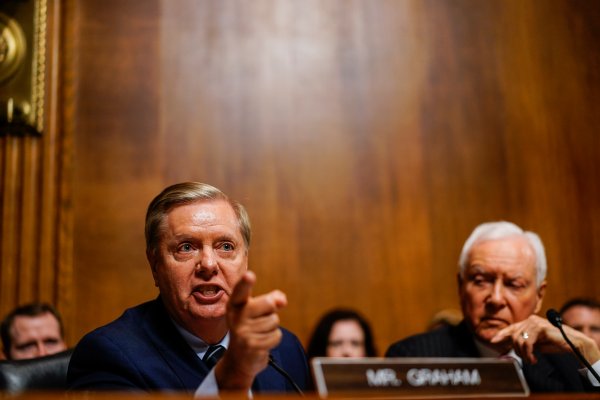 Sen. Lindsey Graham Says Christine Blasey Ford 'Has Got a Problem' as He Continues Attack on Democrats
Next Up: Editor's Pick