Philippine President Rodrigo Duterte gestures as he delivers his state of the nation address at Congress in Manila on July 23, 2018.
Noel Celis—AFP/Getty Images
By Joseph Hincks

Philippine President Rodrigo Duterte has acknowledged for the first time that extrajudicial killings occurred on his watch, a concession that could buttress two criminal complaints filed against him at the International Criminal Court.

In what was described as a rambling speech to government officials outside the presidential palace Thursday, Duterte conceded that his “only sin is the extrajudicial killings,” according to the New York Times. He did not elaborate on his meaning.

Although he has claimed to have personally killed at least three people in the past, Duterte has long denied responsibility for extrajudicial killings that occurred as part of his administration’s brutal war on drugs. Officials claim that casualties of the drug war died as a result of resisting arrest.

The president’s latest remarks — during which he also invited the military to oust him should they feel he is not doing a good job — followed a drop in approval ratings amid high inflation and the rising cost of basic goods. Domestic surveys show his drug war continues to enjoy popular support.

Agnes Callamard, the U.N. special rapporteur on extrajudicial executions, called the admission an “extraordinary statement” among many heard this week as the General Assembly has convened to discuss some of the world’s most pressing problems.

Philippine police say they have killed more than 4,800 people in anti-drug operations since July 1, 2016, when Duterte took office. But human rights groups claim the death toll exceeds 12,000. Citing the number of deaths police classify as “under investigation,” opposition senator Antonio Trillanes IV — who was arrested this week on Duterte’s order — alleges that almost 30,000 people have been killed.

Read more: The Senate Standoff: How Duterte’s Attempt to Arrest Another Critic Is Testing Philippine Democracy

The Hague-based court prosecutes cases of genocide, crimes against humanity or war crimes when a state’s own legal system is either unwilling or unable to do so. In February this year, chief prosecutor Fatou Bensouda launched a preliminary examination into alleged crimes committed in the context of Duterte’s war on drugs.

The following month, Duterte announced that the Philippines would withdraw from the Rome Statute, the treaty that established the ICC.

Neri Colmenares, a human rights lawyer who helped relatives of eight people killed in the drug war file cases with the ICC last month, tells TIME that Duterte’s latest remarks could “be used against him as evidence.”

“We’re glad he made that admission in another of his unguarded moments,” Colmenares said. 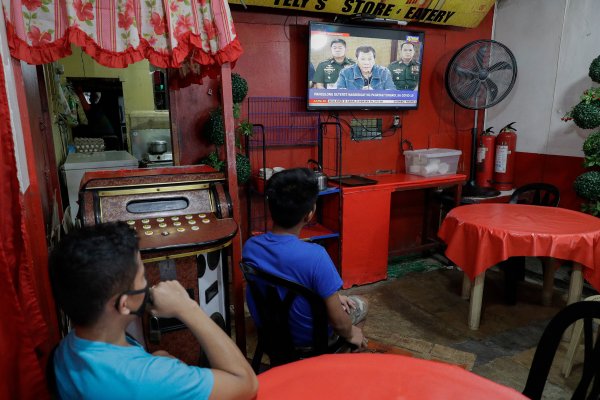