There were three key audiences for Brett Kavanaugh and Christine Blasey Ford’s dramatic testimony, and the stunning, emotional day played differently for each of them.

On Thursday, Ford appeared before the Senate Judiciary Committee and detailed her allegation that the Supreme Court nominee had sexually assaulted her when they were both in high school. Ford was emotional as she fought back tears describing a traumatic event in her life, but precise, articulate and authoritative in her responses. She said she was “100 percent” positive that Kavanaugh was the person who sexually assaulted her 36 years ago and displayed her credentials as a psychology professor when describing her trauma.

“That neurotransmitter encodes memories into the hippocampus so that trauma-related experience is locked there,” she explained at one point about the reliability of her memory. “Apart from the assault itself, these past couple of weeks have been the hardest of my life,” Ford said, before forcefully denying that she came forward for political reasons. “I am an independent person and no one’s pawn,” she said.

Kavanaugh was up next, and he, also fighting tears at times, was passionate and furious. He unequivocally denied every sexual misconduct allegation against him, calling them a “calculated and orchestrated political hit.” Voice rising to a yell, he said, “My family and my name have been permanently and totally destroyed,” citing his decades of service in his community and in high levels of American government.

He broke down in tears at multiple points during his testimony, and alternately raged at the committee Democrats and the “disgrace” of the process. “You may defeat me in the final vote,” he said, “but you’ll never get me to quit.”

It was a powerful day in an intimate hearing room in a Senate office building, and while the accusations against Kavanaugh are criminal and both Kavanaugh and Ford would be breaking the law if they lied under oath, the central question was purely political: will Kavanaugh be confirmed to a lifetime appointment on the highest court in the nation?

For an audience of one in the Oval Office, Kavanaugh’s fate seemed to become more secure as the day went on. Speaking in New York on Wednesday, President Donald Trump maintained support for Kavanaugh but said he was open to having his mind changed by Ford’s testimony and mused about having to pick a different nominee. But after the end of the hearing Thursday, Trump tweeted, “Judge Kavanaugh showed America exactly why I nominated him. His testimony was powerful, honest, and riveting.”

But Kavanaugh’s fate rests mostly with Republicans in the Senate.

Republicans can confirm Kavanaugh along party lines, but to do so, they can only afford to lose one vote. Arizona Sen. Jeff Flake, who sits on the Judiciary Committee, is typically considered a risk, along with Alaska Sen. Lisa Murkowski and Maine Sen. Susan Collins. Murkowski and Collins remained largely out of sight on Thursday, although both had said they would be watching the hearing closely. Tennessee Sen. Bob Corker, who had also been a question mark for the party, declined to speak with reporters midway through the hearing, but at the end of the day came out in favor of confirming Kavanaugh.

“In the end, there’s likely to be as much doubt as certainty going out of this room today,” Flake said Thursday. He did not ask questions of either Ford or Kavanaugh during the hearing.

But South Carolina Sen. Lindsey Graham threw down a gauntlet to his wavering Republican colleagues from the dais in the hearing room with uncharacteristic fervor. “To my Republican colleagues,” he shouted, voice cracking and visibly exercised about the public excavation of Kavanaugh’s high school days and allegations against him, “If you vote no, you’re legitimizing the most despicable thing I’ve seen in my time in politics.”

Graham’s challenge shows that the pressure on Republicans to vote to confirm Kavanaugh could become even more intense after the nominee’s fierce defense of himself before the committee. “I think a lot of senators will be given good reason to vote yes,” White House spokesman Raj Shah told TIME.

But of course, the President of the United States and members of Congress weren’t the only people watching Ford and Kavanaugh’s high-stakes testimony. Citizens all over the country tuned in, and women, especially, were riveted. Kavanaugh walked in holding hands with his wife and was flanked by female supporters behind him. Many others were deeply moved by Ford’s testimony. Nancy French, a conservative Christian writer, cried as she watched Ford in a dark room in her home with her dogs. “As a sex abuse survivor, you feel marginalized your whole life — like no one is listening to you,” she told TIME. According to RAINN, the National Sexual Assault Hotline saw a 147% increase in calls during the day of the hearing.

The reaction of women to Thursday’s hearing is important heading into the midterm elections with a potential Democratic wave looming on the horizon. In 2016, Trump won 52% of white women, but lost women overall, garnering just 41% of their vote. Republican senators are aware of the risks of alienating women during this hearing: the all-male Republican side of the Judiciary Committee had a woman prosecutor come to the hearing to question Ford instead of them, in part to avoid the optics of a group of men challenging a woman on a past sexual assault.

The question is how the constellation of these influences, from the White House to Congress to passionate voters, will affect the Senate’s vote on Kavanaugh, which could come as soon as Monday.

“Do you know how long the past ten days have been?” Kavanaugh said at one point. “Every day has been a lifetime.”

The nation could have the answer to the political question at the heart of the hearings in a shorter time than that. But the larger issues swirling in the fraught hearing room Thursday, about sexual trauma, privilege, power and polarization, are ones the country won’t soon be able to resolve.

-With reporting by Alana Abramson 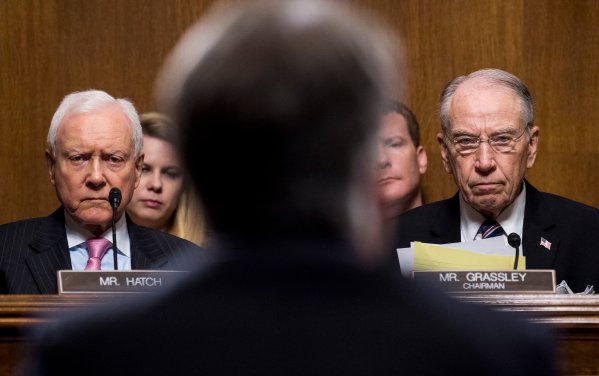 Democrats Pressed for the FBI to Investigate Kavanaugh Allegations
Next Up: Editor's Pick