'I Felt So Enraged.' Activists Descend on Capitol Hill for Kavanaugh and Ford's Senate Hearing

They came wearing shirts that read “United in Fury,” “We Believe Women” and “Women for Kavanaugh.” Some also came with pins stating their belief in Christine Blasey Ford’s testimony. Some wore all black and had taped their mouths in an effort to show how they’ve been silenced.

Thousands of demonstrators descended on Capitol Hill for a historic day of testimony from both Supreme Court nominee Judge Brett Kavanaugh and Ford, the woman who alleges he sexually assaulted her when they were teenagers. (Since then, two other women, Debbie Ramirez and Julie Swetnick, have also come forward with allegations). While Kavanaugh has staunchly denied all the accusations, his confirmation battle ignited a national conversation about sexual assault. Those supporting Kavanaugh seemed to believe he was wrongly and unjustifiably accused. Those backing Ford said her case was emblematic of male dominance.

Both sides took their anger to Capitol Hill on Thursday. By 8:30 a.m. — an hour and a half before Ford’s testimony began and six hours before Kavanaugh’s — several hundred of Kavanaugh supporters had gathered outside the Russell Senate building to for a rally demonstrating their allegiance to his nomination. “I have supported President Trump and [I was] just so glad when he nominated Judge Kavanaugh,” said Carola Lewis from Rockville, Md. “Then this happened after everything ended. I felt so enraged.”

Lewis demurred when asked if she thought Kavanaugh’s accusers were lying. “I don’t want to speak for them because i haven’t heard everything,” she said. “But … I cant reconcile it with the person I’ve seen and heard. Its hard for me to hear.”

That line of thought — not wanting to refute these allegations but still fiercely standing by Kavanaugh — seemed to be the thought process of many of Kavanaugh’s supporters. “I think something might have happened,” said Kelly, another woman who attended the rally, but declined to provide her last name. “You have to listen to her, but it just doesn’t align with the person he’s been for a majority of his life.”

The support for Kavanaugh though, seemed outnumbered by the the people at the Senate who turned out for Ford. Organized by activist groups like the Women’s March, Planned Parenthood and Ultraviolet, they poured into the Senate buildings before heading to the Supreme Court, where they chanted, “You won’t silence us! No means no.” At one point, a subset of demonstrators sat in the middle of the street in front of the Supreme Court singing “we shall not be moved.”

The activism was largely designed to be peaceful, though Capitol Hill Police said that 57 individuals had been arrested. In the Senate, they largely milled around, but their paraphernalia made it apparent who they were supporting. Many were wearing shirts that read “I believe women,” and some were holding up their hands. They were not allowed on the floor where the hearing was taking place, but wandered around parts of the Senate building open to the public.

Some of them were survivors themselves, who identified with Ford and were willing to openly speak about their experiences with reporters. “Her claim is entirely credible; her story is shockingly similar to mine,” said Tae Phoenix, who said she flew in from Seattle to demonstrate. “There is a thread that runs through all of these accounts around drinking and using alcohol to incapacitate women.”

Jane Ellis, who was wearing a shirt that read, “1988. I was 19. #MeToo,” marking the year she was sexually assaulted, said it was unthinkable that she be anywhere but Capitol Hill on Thursday. “Hardly any woman i know has not been sexually assaulted,” she said. “It’s time we stood up and spoke out for all the women who have been assaulted.” 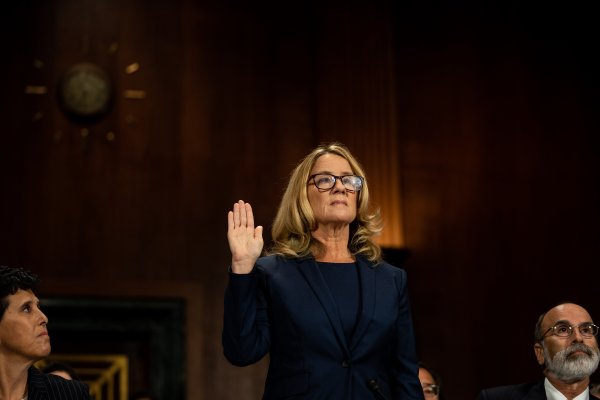 Christine Blasey Ford Said She Flew Despite Her Aviation Phobia. She's Far From Alone
Next Up: Editor's Pick