With Monday marking the beginning of October’s annual Breast Cancer Awareness Month observance, supporters will be donning their pink ribbons as a show of support for ongoing research for a cure. It’s a ritual that repeats itself for any number of causes, such as teal ribbons for ovarian cancer to red ribbons for AIDS awareness.

But when did ribbons begin to be used as symbols for various causes?

The Library of Congress’s Folklife Center has studied the history of such awareness ribbons in American culture, and found that many citizens assume that the tradition is older than it is. Among the most frequently asked questions posed to librarians on the topic is whether families of Civil War soldiers displayed ribbons for missing loved ones during the Civil War, a theory often informed by the 1949 John Wayne film She Wore a Yellow Ribbon. That movie’s story was inspired by a military ditty in which the yellow ribbon appears as a symbol for a far-away lover. That song dates back to the mid-19th century but the center argues that the roots of awareness ribbons can be traced to a much more recent pop-culture reference.

In 1973, Tony Orlando and Dawn released the record “Tie a Yellow Ribbon Round the Ole Oak Tree,” written by Irwin Levine and L. Russell Brown. It reportedly sold three million records within the first three weeks of its release. The tune is about a recently released prisoner who sings that his sweetheart should tie a yellow ribbon around an oak tree if she stills loves him, but the lyrics about an anticipated reunion struck a chord with Vietnam prisoners of war who had returned home earlier that year and attended the Cotton Bowl in Dallas where the artists opened for comedian Bob Hope.

Notably, a few years later, Penne Laingen tied a yellow ribbon around a tree in her Bethesda, Md., yard while she waited for her husband Bruce Laingen. He had been charge d’affaires at the U.S. embassy in Tehran and was one of 66 American hostages seized by Iranian students on Nov. 4, 1979. On Dec. 10, 1979, the Washington Post reported that she suggested others do the same. Other families of hostages followed suit, and sympathetic Americans too. Even the hostages themselves Kathryn Koob and Elizabeth Ann Swift were wearing yellow ribbons in their hair in a Christmas-themed propaganda video released around the holidays, TIME reported. By the time the hostages were en route home the next month, after 444 days, “Yellow ribbons were tied to virtually everything that could not or would not resist: trees, lampposts, TV cameras, trumpets, drums, pretty girls, the hostages’ homes and public buildings, including the White House.” It was, TIME reported, “a traditional American symbol of separated sweethearts.”

The yellow ribbons would also be tied to trees during the TWA Flight 847 hostage crisis in 1985 and during the First Gulf War in 1990 and 1991. The latter conflict coincided with a key moment for AIDS activism, and thus the yellow ribbons inspired advocates to create a red ribbon to raise awareness about the disease. Jeremy Irons popularized the idea by wearing a red ribbon when he hosted the Tony Awards on Jun. 2, 1991.

Shortly after, reportedly inspired by those other awareness ribbons, Charlotte Haley, a 68-year-old housewife in Simi Valley, Calif., created a peach-colored ribbon that she hoped could raise awareness about breast cancer, the disease that her grandmother, sister and daughter had. At the local supermarket, she handed them out in packets of five attached to a postcard that read: “The National Cancer Institute’s annual budget is $1.8 billion, only 5 percent goes for cancer prevention. Help us wake up legislators and America by wearing this ribbon.” By May 1992, The New York Times had already dubbed that year “The Year of the Ribbon.”

While the Susan G. Komen Foundation says it began handing out pink ribbons at its first Race for the Cure in Oct. 1991, the pink ribbon became even more popular after Self magazine featured it on the cover of that month’s issue and partnered with the businesswoman and philanthropist Evelyn Lauder to hand out 1.5 million pink ribbons at Estée Lauder makeup counters. Eventually, the association with the cause spread beyond the ribbon to the color pink itself. In 2006, TIME reported that Komen’s partnerships with pink promoters raked in $30 million a year.

By now, awareness ribbons are such a ubiquitous idea that some businesses have been accused of trying to cash in on the enthusiasm they generate. “Pinkwashing” has come to refer to the process of using the color pink to generate goodwill while only making some minimal or perfunctory contribution to the actual cause of breast-cancer research and awareness. “In other words, take off those rose-tinted glasses,” TIME advised readers in 2006, “ask questions and read the fine, pink print.” 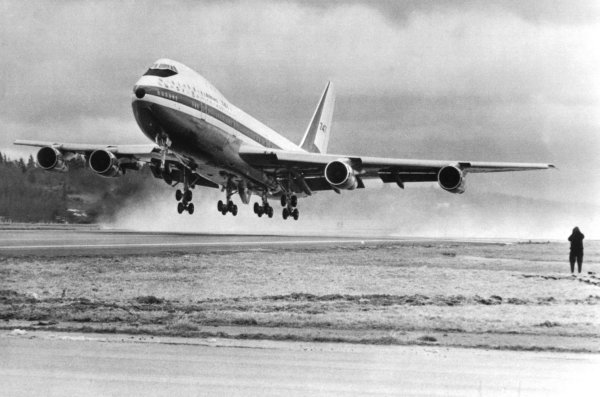 The Boeing 747 Is Turning 50. Here's How the ‘Queen of the Skies’ Came to Reign Over Air Travel
Next Up: Editor's Pick