Ideas
By Roger Pilon
Pilon is vice president for legal affairs at the Cato Institute and founding director of Cato’s Robert A. Levy Center for Constitutional Studies.

The circus surrounding the Supreme Court nomination of Judge Brett Kavanaugh has shown beyond any doubt how deeply divided America is. And when the dust settles, we’ll still be divided. So too will be the Court. To see why, and how we got here, we need to start at the beginning.

In a nutshell, our founding documents were designed mainly to secure liberty under limited government, especially after the Civil War amendments were added to the Constitution, checking what states could do. We didn’t always abide by those ideals, but generally we lived life in the private sector, our relationships ordered by common-law principles of property and contract.

Early 20th century progressives rejected that vision fundamentally. They wanted to promote social and economic change through statutory law. But the courts rejected much of that legislation on constitutional grounds, most sharply during President Franklin Roosevelt’s first term. After his landslide reelection in 1936, he tried to pack the Supreme Court with six new members. Congress rejected the scheme, but the Court got the message.

Over the next few years, the Court opened the floodgates for the modern redistributive and regulatory state, reduced economic liberty to a second-class status, and, in 1943, allowed Congress to delegate ever more of its legislative power to the executive-branch agencies Congress had been creating. Today, this is where much of our law is written—not by Congress, but by unelected bureaucrats. The Constitution was thus turned on its head and politicized.

As statutory policies replaced common-law principles, things have grown only more complicated. In short, while the Court was “active” in authorizing these changes, it was essentially deferential to Congress, the president and the states, which allowed government to grow, unchecked by constitutional constraints. That posture would change in the 1950s, however, when the Court finally turned to civil rights. But not all of that liberal activism was grounded in the Constitution, as with the Court’s 1973 abortion decision, and that led to a conservative backlash.

Thus, we now had two jurisprudential schools: liberals urging “judicial activism,” to promote “evolving liberal values,” conservatives urging “judicial restraint,” making peace essentially with the New Deal Court’s deference to the political branches. With the election of Ronald Reagan, the conservative school came to the fore—and the brutal fight over his nomination of Robert Bork to the Court in 1987 saw all of these forces collide, beginning a three-decades-long battle for control of the Court.

But neither camp is grounded in the Constitution as understood during our first 150 years. Both have bought into the New Deal court’s rejection of limited government—liberals because they like it, conservatives because they think it a lost cause. Yet those vast government programs still deeply divide us.

We’re divided also when it comes to our rights. Liberals tend to invent rights from whole cloth, like to all manner of government services—while disparaging economic liberty. Meanwhile, conservatives would allow legislative majorities to run roughshod over many personal rights, like the right to marry whomever you want or to smoke whatever you wish.

Is there any hope for reconciliation? There’s a third, libertarian school that began slowly emerging in the 1980s, urging a restoration of our founding principles. It’s had a noticeable effect on the two dominant camps, while standing apart from them. When the Court checked Congress’s regulatory power in 1995, for example, liberals screamed. When it upheld certain gay rights in 2003, conservatives screamed. Libertarians stood behind both decisions as consistent with the Constitution.

But for the moment, the battles continue. The growth of government has politicized so much in life, including those matters that once were sorted out privately, under the easily understood principles like property and promise that allowed for liberty to flourish. When politics determines the ordinary issues of life—jobs, retirement, health care, day care, education, housing and more—and the political battles over those end up in the courts, it’s no wonder that we’re in a battle for the Supreme Court, and that those who fear losing the battle resort to desperate means.

The founders understood this, which is why they left most of life beyond government’s reach. It’s time to start rethinking whether we want to be “all in this together,” dependent on a government that is increasingly dysfunctional and going broke. However the issues immediately before us are resolved, we need to focus on the bigger constitutional questions underlying them. 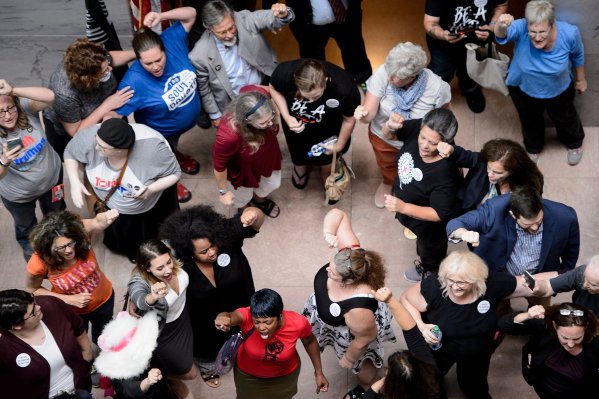 Monica Lewinsky Was My Intern. Why the Women Accusing Kavanaugh Give Me Hope
Next Up: Editor's Pick