How Sexual Assault Survivors Reacted to Christine Blasey Ford's Testimony: 'She’s Doing It for All of Us'

It was Christine Blasey Ford’s admission that she was “terrified” to appear before the Senate that hit home for many sexual assault survivors as they gathered across the country to listen to her testimony that Supreme Court nominee Brett Kavanaugh had sexually assaulted her in high school.

“A lot of us understand that feeling, and none of us wants to be in that situation, none of us want to have to relive it, and especially not in front of the entire country,” says Georgetown law student Julia Mizutani, 25. “She was definitely pushed into it, and that’s not fair, but I’m grateful she’s doing it for all of us.”

Mizutani says she was assaulted in high school in an incident she described as “almost the same, exactly” as Ford’s. She said she cried with other students as they watched Ford deliver her opening statement Thursday morning, and they led a moment of silence for survivors soon after.

“I wasn’t around for Anita Hill, but I imagine that this is very similar, and it’s frustrating that nothing has changed,” Mizutani says. “And I think we’re hoping things have changed in the #MeToo era — and I guess we’ll see — but the fact that it even had to come to this means we haven’t moved the needle all that far.”

Ford accused Kavanaugh of pushing her onto a bed, covering her mouth and trying to remove her clothes at a party in high school more than three decades ago. Kavanaugh has denied the accusation, and he and Republican Senators reacted with outrage during his own hearing later Thursday.

The back-to-back testimony from Ford and Kavanaugh quickly became a national moment, as people across the country tuned in — at law schools and the New York Stock Exchange, on airplanes and subway cars. But for sexual assault survivors, the moment provoked particular turmoil. The Rape, Abuse & Incest National Network (RAINN) saw a 147% increase “above normal volume” in calls to the National Sexual Assault Hotline on Thursday.

A 76-year-old Missouri woman called into C-SPAN and broke down in tears, saying she was sexually molested by an older student when she was in second grade. “This brings back so much pain,” she said. “I thought I was over this, and I have not brought this up for years until I heard this testimony, and it is just breaking my heart.”

Charity Ave-Lallemant, 44, was a freshman in college when Anita Hill testified during the confirmation hearings for Supreme Court Justice Clarence Thomas. On Thursday, she made a sign that said “Dr. Ford, we believe you,” and stood outside the Dirksen Senate building with a crowd of women, listening to Ford’s testimony over a megaphone.

“It was so powerful to stand there and listen to her words and not even see her. Just hear her words and look at the faces of all of the women outside just listening to her words,” says Ave-Lallemant, who said she was sexually assaulted in college and again later in life.

“It’s been extremely anxiety producing to have the news wash over us every day here, and I think to a certain extent, I’m numb to it in a lot of ways because it’s so constant,” she says. “But I have been looking forward to today because I felt that I could do something to stand for someone, the way I wish someone had stood for me.”

Rosie Ryan — a 20-year-old Barnard College student and co-president of Take Back the Night, a group that advocates against sexual violence — says she admired Ford’s bravery and composure, but was disappointed to witness a system that she doesn’t think “can ever hold space appropriately for the experience of survivors.”

“I cried several times, and I just wanted to hug her,” she says.

Others spoke out on social media to share how Ford’s testimony had affected them.

Some survivors chose not to watch at all.

“I would desperately like to believe that Prof. Ford’s testimony will make a difference on the ultimate outcome of the nomination. But I am not watching because I cannot bear the disappointment that I think will follow: Judge Kavanaugh’s confirmation as a Supreme Court Justice,” Georgetown law student Desiree Luckey, 27, said in an email.

“I know if I watch, I will be frozen in the memories of my own rape and immobilized, rendering myself ineffective and vulnerable. I don’t watch so that I can act and hopefully in acting, I can do my part to create a culture where rapists don’t win.” 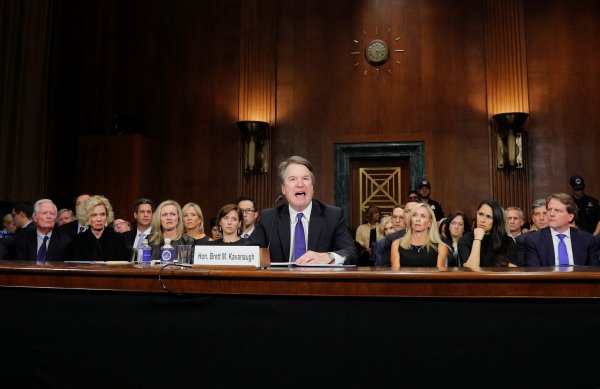 Kavanaugh Apologizes to Sen. Klobuchar For Drinking Question
Next Up: Editor's Pick