'Save Your Indignation.' Stephen Colbert Has a Direct Message for Brett Kavanaugh

The day that Dr. Christine Blasey Ford testified before the Senate Judiciary Committee about her allegations of sexual assault against Judge Brett Kanavaugh, President Trump’s controversial pick for the Supreme Court, was “one of the longest days” Stephen Colbert could remember—and he has “been to a Renaissance Fair.”

As Colbert noted in his opening monologue on Thursday night’s The Late Show, after Blasey Ford testified, it was Kavanaugh’s turn to speak, and according to Colbert he came with a “well-coiffed head of steam.”

During his testimony, Kavanaugh admitted that he drank beer in his past, repeating “We drank beer” and “We liked beer” and “I still like beer.” Colbert, imitating Kavanaugh, quipped, “Any beer companies out there looking for a spokesman know how to find me.” As the committee continued to question Kavanaugh about his drinking, as it went to the heart of Blasey Ford’s testimony, Kavanaugh said that while he had never blacked out from drinking, he had fallen asleep, which Colbert skewered, saying, “Isn’t one man’s blackout another man’s street nap?”

Kanavaugh’s emotional speech called out the Democrats on the Judiciary Committee, claiming they were taking their aggression towards Trump out on him. During his testimony, he said, “Today I have to say that I fear for the future.”

To that, Colbert replied, “Hashtag MeToo.”

Addressing Kavanaugh directly, the host ended on this: “Save your indignation that finally someone is taking one woman’s sexual assault seriously.” 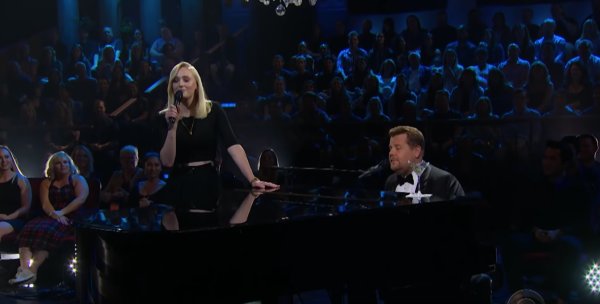 Sophie Turner Ends the Baby Shark Challenge With a Deeply Serious Rendition
Next Up: Editor's Pick