These 6 Habits May Reduce Your Risk of Breast Cancer

Breast cancer is the most prevalent cancer in the U.S., affecting almost 85 of every 100,000 Americans, according to recent data from the World Health Organization’s International Agency for Research on Cancer (IARC). Around the globe, 627,000 people are projected to die from breast cancer this year alone.

The silver lining is that with early detection and proper care, breast cancer is among the most treatable forms of the disease. In the U.S., breast cancer deaths dropped by 40% between 1989 and 2015, thanks to better screening and access to care — but a large body of research suggests that widespread adoption of certain lifestyle choices could reduce that number even further. While there’s no single or definitive way to prevent cancer, here’s what science says may reduce risk for developing breast cancer.

Regularly drinking alcohol is associated with at least seven different kinds of cancer, and the link between booze and breast cancer is particularly strong, perhaps because alcohol can increase estrogen levels to a potentially dangerous degree. Federal dietary guidelines recommend drinking only in moderation, defined as up to a drink per day for women or two per day for men; drinking at this level, many experts say, likely does not harm health, and may confer some benefits. But most of the possible health benefits of drinking appear to be related the heart, and one 2015 study published in the BMJ found that even one drink a day may raise a woman’s risks of developing cancer, particularly breast cancer, by up to 13%. Accumulating evidence about these risks and others even recently led some researchers, writing in the Lancet, to urge people not to drink any alcohol.

Exercise is beneficial for many reasons, ranging from better cardiovascular health to improved mood. Research also shows that regular physical activity may lower a person’s risk of developing breast cancer, and it likely does so for a variety of reasons. Exercise can reduce inflammation, improve the immune system and lead to a drop in body fat, which is associated with a lower breast cancer risk. About 300 minutes of physical activity per week is ideal for breast cancer prevention, researchers found in a 2015 JAMA Oncology study. Similarly, other research has suggested that up to 40% of cancers are related to being overweight or obese, which an exercise regimen can help prevent.

Fiber — the part of plant-based foods that your body cannot absorb and digest — helps with everything from digestion to cholesterol and weight management. And a 2016 study published in the BMJ found that women who said they ate about three daily servings of fiber-filled fruit when they were teenagers had a 25% lower chance of developing breast cancer as adults, compared to those who said they ate less fruit.

Fat is a hotly contested nutrient. Recent research suggests that eating full-fat dairy may increase longevity and reduce the risks of developing Type 2 diabetes and obesity. But, on the other hand, a study published in JAMA Oncology in May found that women who followed low-fat diets that were also rich in produce and whole grains had a 22% lower risk of dying of breast cancer during more than eight years of follow-up, compared to women who did not adjust their fat intake. The study couldn’t tease out exactly why a low-fat diet was linked to a lower cancer risk, however, and the authors noted that women on this eating plan also tended to lose more weight and report higher overall nutrient intake.

Smoking is typically associated with lung cancer, but some research suggests that carcinogens in cigarettes may also increase a person’s risk of developing other types of the disease, including breast cancer. One study, published in the journal Breast Cancer Research in 2017, suggested that this risk may be particularly strong for people who start smoking early in life, potentially because of the way cigarettes affect hormonal pathways during breast development.

A 2016 JAMA Oncology study found that even women with a genetic risk of breast cancer may be able to reduce their odds of getting the disease by adopting a number of the habits listed here, like limiting alcohol and cigarettes, and keeping body weight down. Among those lifestyle choices: avoiding hormone replacement therapy for menopause. Hormone replacement therapy replaces flagging levels of hormones such as estrogen and progesterone, and it can ease symptoms of menopause, including hot flashes and fatigue. But research has also found that it can increase breast cancer risk, leading many doctors to believe that the risks outweigh the benefits for many women. Discuss your specific case with your doctor. 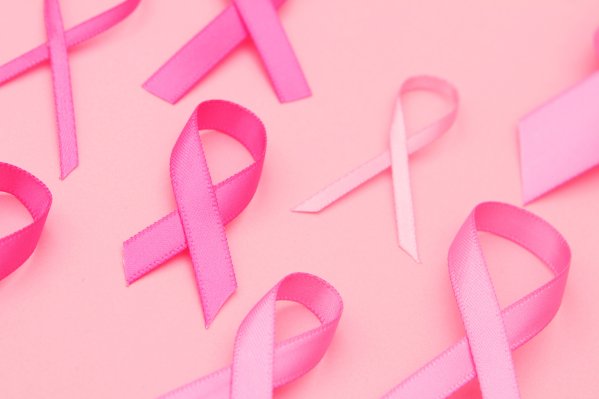 Wearing a Pink Ribbon for Breast Cancer Awareness? Here's How Awareness Ribbons Became a Thing
Next Up: Editor's Pick