In Washington, Christine Blasey Ford’s testimony was the eye of a hurricane, a quiet and still moment at the center of the #MeToo storm that has swept across the country since last fall.

People in the nation’s capital focused on how her words might affect the nomination of Brett Kavanaugh for the Supreme Court or the midterm elections in November.

But for ordinary women around the country, it was a moment to listen to a woman, just like them, as she sat before a mostly male Senate committee to relive the most traumatizing experience in her life. It was a riveting moment, one of those pieces of history that people couldn’t look up from and will long remember.

As Ford sat down for the first time in front of the American people, they watched in silence. As her voice broke recounting her memory of Kavanaugh holding her down, putting his hand over her mouth and trying to remove her clothes, they cried. As she faced probing questions from a prosecutor, they texted each other.

Women watched by themselves at home and with supportive friends. They watched from their desks, or sitting in break rooms with C-SPAN streaming, or sitting in parked cars, missing their appointments. They listened on buses and on subways.

Traders on the floor of the New York Stock Exchange were streaming the testimony, their eyes glued to Dr. Ford’s terrified face instead of screens full of numbers. A Zen Buddhist monk broke her weeklong silent meditation to watch and live-tweet the hearings.

And they spoke up.

Students and alumnae of Ford’s alma mater, Holton Arms, wore black and stood in the Senate office building to show their support for their former classmate. Activists occupied Sen. Ted Cruz’s office and turned on the TV to make sure his staff could hear her testimony. One woman at the Capitol told Senator Lindsay Graham that she had been raped. (He responded “I’m so sorry… you need to go to the cops.”)

A 76-year old woman called C-SPAN to say that she had been sexually molested in the second grade. “This brings back so much pain,” she said. “I thought I was over it, but [I’m] not. You never forget it. … I had not brought this up for years until I heard this testimony.”

Others took to social media to share their thoughts.

Nancy French, a conservative Christian writer who has worked with GOP luminaries like former Alaska Gov. Sarah Palin and Sen. Ben Sasse, cried as she watched the testimony in a dark room in her home, surrounded by her dogs.

“As a sex abuse survivor, you feel marginalized your whole life — like no one is listening to you,” she says. “But as the Senators interrupted her testimony to grandstand every five minutes, it slowly dawned on me that the culture holds sex abuse survivors in less esteem than I thought. They perceive us to be less than nothing.”

“We are political pawns, elevated when we fit the narrative, ignored when we don’t,” she continued. “I think that’s the reason I’m crying, but honestly I’m not sure.” 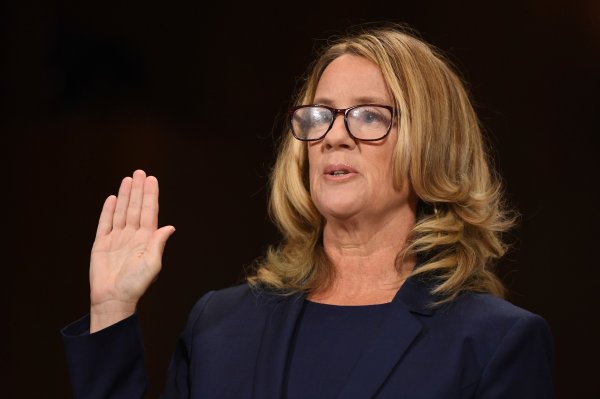 A 76-Year-Old Woman Called C-SPAN to Talk About Her Assault
Next Up: Editor's Pick