The Supreme Court of the United States of America, lofty pedestal of the black-robed solons, had never seen a job-interview process like this: allegations of sexual assault, the nominee declaring on cable news that he had been a virgin well past high school, the President declaring the whole spectacle the result of a Democratic “big fat con.” But then, even before the scheduled Senate hearing on allegations of sexual assault by Brett Kavanaugh, it was clear the Kavanaugh nomination would be a historic moment for the court.

It is tempting to see l’affaire Kavanaugh as just another contemporary political carnival, replete with angry protests and partisan recriminations. But it could hardly have more serious consequences. The allegations themselves are shocking: multiple women have come forward with accusations of sexual assault against Kavanaugh, and he has forcefully claimed his innocence. The families of Kavanaugh and Christine Blasey Ford, his first accuser, are under guard to protect them from their fellow citizens. The fiasco has forced a public reckoning over privilege, the persistence of sexual trauma and the balance of power between men and women.

For the Supreme Court, the stakes go beyond Kavanaugh’s fate. It’s the latest evolution of a nominally non-partisan institution into an instrument of politics. In a nation divided, left and right are coming to view the court less as an interpreter of the law than as an activist imposer of moral and political outcomes. “It’s no coincidence that confirmations were less contentious when the court was engaging in less political decisionmaking,” says Leonard Leo, a top adviser to President Trump on judicial nominations. “When the court injects itself into lots of things that it shouldn’t, and when there’s lots of overreach by the court, that’s an inevitable thing.”

If some partisans celebrate the change, plenty of other Americans might mourn it. The court is a fragile mix of personal relationships and towering ideals. It cannot avoid being damaged by the mounting political fight, whether in the ability of its nine members to reach consensus on some of the hardest issues the country faces, or in the public trust in the result. Whoever ends up on the court, it will be called on to adjudicate the very issues–gender equality, due process and justice for victims of sexual assault–that turned the nomination of their latest potential member into a political circus.

The country still approves of the Supreme Court more than it does most other pillars of society, but not as much as it once did. And during the closest historical parallel to today’s crisis, there was a particularly dramatic drop. In early 1991, before Anita Hill testified that now Justice Clarence Thomas had sexually harassed her at work, public confidence in the court was at 48%. After the Hill hearings that October, it dropped by nearly 10 percentage points. Earlier this year, it was measured at 37%. That’s better than the 11% who approve of Congress and the 23% with confidence in newspapers, but far below the military and churches, and about on par with the presidency, the ultimate political institution.

A series of major decisions in the past several decades have given partisans on both sides something to dislike about the court, from abortion rights to campaign finance to health care. In 1973, Roe v. Wade discovered an unwritten “right to privacy” in the Constitution that made abortion legal nationwide. The court gave the presidency to a loser of the popular vote, legalized sodomy and later gay marriage, allowed unlimited corporate spending on elections and expanded gun rights. Recently, the court has declared Obamacare and Trump’s travel ban mostly legal, while blocking Trump’s attempt to unwind President Obama’s protections for young undocumented immigrants.

From the Justices’ standpoint, the court was doing its job: interpreting the Constitution and body of laws without regard for who might be pleased or annoyed by the outcome. But partisans care primarily about outcomes, and Americans passionate about the high-profile issues the court was deciding increasingly channeled their frustrations into the political process. The Senate that had traditionally granted Presidents wide latitude to nominate simpatico Justices began to vet them more aggressively. In 1987, Robert Bork became famous when his nomination was torpedoed by his perceived ideology, though he wasn’t the first nominee rejected on that basis.

In the ensuing years, however, most Justices were confirmed by comfortable margins. Thomas got 11 Democratic votes, and the nominees of Presidents Bush and Obama got between four and 22 votes from members of the opposing party. Meanwhile, the influential Federalist Society, irked by what it perceived as the liberal bent of the judiciary, began a long-term project to stock the pipeline with conservative judges, and the court became a rallying cry for Republican politicians. In 2013, frustrated by the GOP’s use of the 60-vote filibuster threshold to thwart Democratic appointments, then Senate majority leader Harry Reid changed the rules to allow most positions–but not the Supreme Court–to be filled with a simple majority.

With the death of the court’s conservative lion, Antonin Scalia, in 2016, Obama had the opportunity to install a liberal jurist and reshape the court for a generation. But Republicans had taken over the Senate majority and GOP leader Mitch McConnell declared that the Senate would not vote on Obama’s nominee, the center-left federal judge Merrick Garland. The move paid off: then candidate Trump used a list of conservative prospective Justices compiled by the Federalist Society to help rally the otherwise dispirited GOP base in the 2016 election. When he won, Trump kept his promise with the nomination of Neil Gorsuch.

To get Gorsuch confirmed to what Democrats considered a stolen seat, McConnell again changed the rules, making a simple majority the threshold to confirm even high-court nominees. And with that, the transformation of Supreme Court nominations into pitched partisan battles was complete. In September, Justice Ruth Bader Ginsburg lamented that confirmation hearings have become “a highly partisan show,” with Republicans and Democrats both moving “in lockstep.” She added, “I wish I could wave a magic wand and have it go back.”

Now, less than 50 days from the midterm elections, the politics could hardly be more intense. Even before the allegations, Kavanaugh was the least popular nominee in a generation, according to a CNN analysis. With a potential Democratic wave looming, the GOP faces a dilemma. If they vote to confirm Kavanaugh, they risk alienating female and independent voters. If they don’t, they’ll face the ire of their base. As the allegations against Kavanaugh swirled, Trump tweeted a quote by conservative commentator Rush Limbaugh: “You can kiss the MIDTERMS goodbye if you don’t get highly qualified Kavanaugh approved.”

The situation is also fraught for some Democrats, particularly those in red states, who must balance their conservative constituents with an angry liberal base. Victory for the Democrats working to defeat Kavanaugh likely would be short-lived: Trump’s next pick would be another conservative nominee whose judicial philosophy they won’t like any better than Kavanaugh’s.

“This process is disastrously broken,” says Connecticut Senator Richard Blumenthal, a Democrat on the Judiciary Committee. On that, at least, both sides can agree. Outgoing Arizona Senator Jeff Flake lamented, “However this vote goes, I am confident in saying it will forever be steeped in doubt.”

The court has always been the most hermetic of the three branches of government, a mysterious and secret world into which the public gets only stray glimpses. The Justices rarely speak publicly, and they take pains not to weigh in on partisan matters. There are no cameras allowed in the courtroom, and few leaks come out of the private deliberations. The judges’ robes are themselves a statement–that it is their role that matters, not their personalities.

What effect the heightened politicization of Supreme Court nominations will have on its inner workings is a crucial question. Whether or not Kavanaugh has been treated fairly, he won’t be the last high-court hopeful to face an acrimonious partisan gauntlet. “It is a shame you can do this to a person’s life,” Trump said on Sept. 25. “Who is going to want to go before the system to be a Supreme Court judge or even a politician?”

The court asks us to trust a process we cannot see. More than the other two branches of government, which are held accountable to voters and can write laws and make policy, the Supreme Court derives its very power from the public’s willingness to respect and abide by its decisions. The extreme exposure of modern politics makes that harder and harder–even if it isn’t entirely new. In 1832, when President Andrew Jackson disagreed with a Supreme Court decision under Chief Justice John Marshall, he sneered, “John Marshall has made his decision; now let him enforce it.” Like all our institutions, the court works only if we all believe in it.

–With reporting by ALANA ABRAMSON and BRIAN BENNETT/WASHINGTON

Write to Molly Ball at molly.ball@time.com and Tessa Berenson at tessa.berenson@time.com. 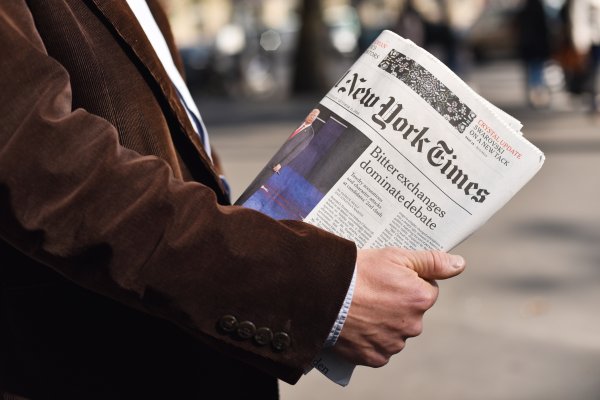