Ginsburg said she was “cheered on” by the #MeToo movement, and praised women for speaking out, Reuters reports.

“Every woman of my vintage has not just one story but many stories,” she told first-year law students at Georgetown University. “But we thought there was nothing you could do about it – boys will be boys – so just find a way to get out of it.”

After a discussion of “unconscious bias” and gender discrimination, Ginsburg commended the ongoing momentum of #MeToo, which has seen numerous powerful men exposed and discredited. “It was one complaint and then one after another the complaints mounted. So women nowadays are not silent about bad behavior,” she said.

Ginsburg, 85, is seen as one of the most staunchly liberal voices on the Supreme Court, and is something of a progressive cultural icon for her outspoken defense of left-wing causes. But she has also drawn censure for criticizing President Donald Trump.

At the lecture on Wednesday, she did not directly mention Kavanaugh or his accusers.

On Thursday, the Senate Judiciary Committee is scheduled to hear testimony from Kavanaugh and Christine Blasey Ford, who alleges that Kavanaugh sexually assaulted her in 1982 when they were both in high school.

Most Popular on TIME
1
The Inside Story of Signal
2
A Possible Third Wave
3
USPS Fails to Update 1.8 Million Addresses 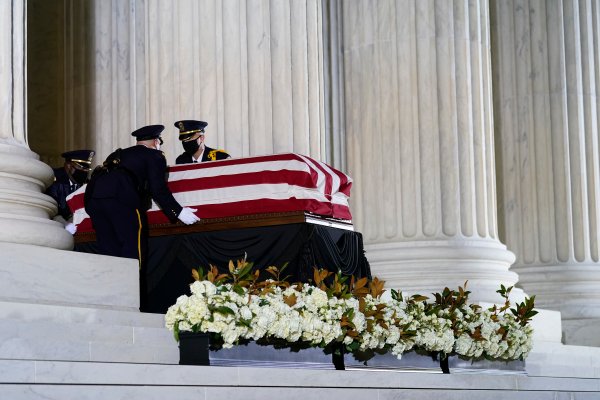 Ginsburg Is First Woman to Lie in State at U.S. Capitol
EDIT POST