Review: The Apple Watch Series 4 Is a Welcome but Expensive Upgrade

The Apple Watch Series 4, like Beyoncé, did not come to play with you. It came to slay, or in this case, make sure you aren’t slain by your own cardiovascular deficiencies. A slew of both external and internal improvements make Apple’s wearable hard to beat. From a larger display to new heart monitoring features, it’s packed to the gills with things that’ll make you say, “cool!” Those additions are welcome improvements that make the Apple Watch an enticing smartwatch, but nonetheless leave me feeling slightly disappointed it’s not a more capable wearable. It’s a great watch — at least until you want to sleep.

On the outside, the $399-and-up Apple Watch looks more refined than its predecessor. It’s still square, but it’s softer and more rounded. If I didn’t know any better, I’d say Apple took a cue or two from competitor Fitbit and its Versa smartwatch. It’s a subtle design change, noticeable only when comparing the Series 4 to previous versions. Subtle is good, especially when it comes to accessories like watches. Let’s hope it leads to a completely round version — “squircles” are cute, but they don’t hold a candle to a truly circular watch face.

The Apple Watch display has been substantially upgraded, giving you ample room to see what’s on your watch face. More space for complications (the tiny bits of data on the face) means more relevant information and less time spent pulling out your phone to get at what you’re looking for. The smaller watch has gone from a screen size of 563 square millimeters to 759 square millimeters, all while retaining the same width and shaving just under a millimeter of thickness off; the larger model has made a similarly substantial leap in screen size. Apple says it’s volumetrically smaller than the previous Apple Watch, but that doesn’t mean everything is shrunken. The watch is about two millimeters “taller,” hence the new 40mm and 44mm designations. Don’t worry about your bands, though — older straps are compatible with the new watch sizes.

The changes on the inside are just as impressive. Replacing the S3 processor — the brains of the Apple Watch — is a new S4 chip that makes the watch feel more responsive to finger swipes and wrist-twisting time checks. There’s also Apple’s proprietary W3 chip, which adds the more efficient Bluetooth 5.0 to the watch. This thing is quick, and feels light-years ahead of the first Apple Watch from three years ago.

Health is the name of the game with the new Apple Watch. In addition to an improved optical heart sensor, Apple included an electrical heart sensor capable of performing ECG scans, powered by the (harmless) electrodes on the underside of the watch as well as on the digital crown. The Apple Watch Series 4 has also been cleared by the FDA as an over-the-counter ECG scanner. It won’t replace a visit to the doctor, but it will give you some information that could spur you to make an appointment. By putting one finger on the crown during your scan, it will monitor your heart’s electrical signals and create an ECG report indicating either an irregular heart rhythm (a potential sign of atrial fibrillation) or a normal one, known as sinus rhythm. The watch will also be able to detect suspiciously high (or low) heart rates and alert you to what could be a sign of a more serious condition. Both features will be available, according to Apple, later in 2018. (Some critics worry that making such scans available to the masses could contribute to hypochondria.)

A feature that detects when a user takes a hard fall is available now, but disabled by default if you’re under 65 years old. You can configure fall detection to make an emergency call to your preselected contact if you fall and are then immobile for over a minute. Don’t try to activate it, please.

If you’re waiting for an Apple Watch that’ll last you a whole 24 hours, you’re not the only one. A huge display is nice, and the addition of heart-friendly functions is great for people concerned about their wellbeing, but to forgo sleep tracking for something like a slightly bigger screen and an ECG feature makes me wonder which aspects of my health Apple is trying to help me improve, and why. The lack of built-in sleep tracking functionality is a real downer, and one of the primary reasons I’ve never truly committed to wearing the Apple Watch on a daily basis. Also, charging it on a daily basis is still an unwelcome fact of life.

Sleep is one metric more and more people want to track, and one that Apple is very aware of. Just last year Apple acquired sleep-tracking startup Beddit, and now sells its under-the-mattress sleep-tracking pad. That means you still have an Apple-approved method to log those Zzzs, but sleep on the wrong side of the bed and you’re out of luck. Watch apps that track your sleep certainly do exist, though you’ll need to make sure your Apple Watch is charged enough to last the eight or so hours you intend to spend in dreamland.

Whereas Apple’s latest iOS update gives a much-needed boost to iPhones new and old alike, the Apple Watch Series 4 is all about the hardware improvements. The recently released WatchOS 5 benefits from the new Apple Watch’s faster processor and larger screen, making reading and responding to messages and notifications a lot easier, since you’re no longer attempting to make laser-guided touches with your finger. Of course, WatchOS 5 still brings some welcome new features, like a walkie-talkie mode, improved recognition of more exercises (like yoga and hiking), better notification management, and an Apple Podcasts app you can use to stop listening to U2.

Of course, $399 is a high price to pay for a wearable, especially considering the previous Apple Watch Series 3 started at $349 and is now available for $279 and up. But the upgrade is significant enough that many Apple Watch fans may find the leap worthwhile. If you’re torn between the GPS or more expensive cellular version, consider this: To take advantage of the cellular functionality, you’ll need a separate data plan for your wearable, usually costing around $10 per month. It’s not a lot, but it is another thing for which you’ll have to pay. For athletes or outdoorsy types, it makes sense: Who wants to bring their giant iPhone when they decide to travel light during a jog?

With a larger screen, updated internals, more in-depth health functionality, and a library of apps, the Apple Watch Series 4 is the best wearable device you can get, no question. Does that mean you’ll like it? Probably. Does it mean it’ll change your life, get you off the couch, and have you running full steam ahead toward your new, healthier, mindfulness-filled future? No, but it might get you started. 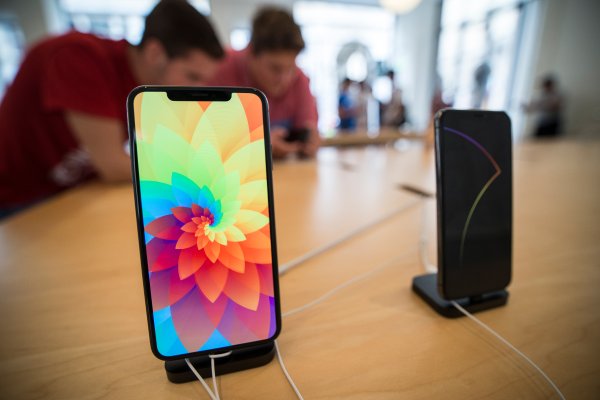 Apple iPhone XS Review: Excess at its Best
Next Up: Editor's Pick