A Perfect Lie Detector Has Never Been Found. Here’s Where Polygraphs Like Christine Blasey Ford’s Come In

Leonarde Keeler (left) testing his polygraph machine on Marjorie Creighton in presence of August Vollmer during a trial in Chicago in 1932.
Keystone-France/Gamma-Keystone—Getty Images
By Olivia B. Waxman

In advance of her appearance on Thursday before the Senate Judiciary Committee, psychology professor Christine Blasey Ford, who accuses Supreme Court nominee Brett Kavanaugh of sexually assaulting her when they were in high school, submitted more than just an opening statement and supporting affidavits.

She also submitted to the committee the results of a polygraph, or lie-detector test, which she took in August at the suggestion of her lawyer.

“I didn’t see any reason not to do it,” she told the Senate committee during the hearing. “Based on the advice of the counsel I was happy to undergo the polygraph test, though it was extremely stressful.”

The American Psychological Association holds the position that such results are not reliable, but her credibility is being challenged in front of the nation and the world. Polls suggest that Americans are split on whether to believe Ford or Kavanaugh, who denies her allegations. So it’s understandable that she and her legal team would look for a way to prove that she’s being truthful.

That same human instinct to remove doubt is the very one that led to the invention of such a test in the first place.

Though the idea of a way to guarantee truth is an old one, the early 20th century saw a flourishing of attempts to discover a scientific solution, many of them based on the idea that the physical signs of stress go along with the act of telling a lie. For example, in 1913, the Harvard psychologist William Moulton Marston — who would go on to create the comic book hero Wonder Woman — came up with an early version of a lie-detector test. His device intermittently monitored the test-takers’ blood pressure, via cuff, for spikes that could indicate guilt as they told their story of what happened. “Marston thought that his technique exposed deep psychological truths about dominance and submission, and he later pioneered the use of the technique in testing movie audiences and probing the human (sexual) psyche,” Ken Alder, author of The Lie Detectors: The History of an American Obsession, told TIME in an email.

On the other coast, nearly a decade later, Berkeley physiologist and cop John Larson developed a lie detector machine that also took into account breathing depth and heart rate, and that measured those figures against a control — a baseline that was created by asking the subject irrelevant questions — rather than merely looking for spikes. Invented under the supervision of the city’s police chief August Vollmer, a leader in police reform efforts in the early 20th century, it was designed to “make law enforcement more law-abiding by substituting scientific interrogation for violent third degree methods,” Alder explains, and while it wouldn’t become the default method, he used it “therapeutically” to “help reform juvenile offenders.”

But the main polygraph in use today was a third invention, the brainchild of Leonarde Keeler, a lawyer, who developed it under Larson. Patented in 1931, the Keeler Polygraph measured the aforementioned three physiological responses, to which he’d later add sweatiness, while test-takers answered a series of yes-or-no questions and targeted questions. In some cases, Alder explains, he asked the subject about “guilty knowledge” — information that only the true criminal and the police would know — in order to see the reaction.

As early as 1935, TIME reported that the American Psychological Association heard from an expert that while the device could detect emotion, it couldn’t necessarily differentiate between the stress of telling a lie and other stresses.

But, crucially, Keeler’s goal was not exactly to figure out the truth. Instead, it was to convince criminals that he had done so, thus prompting them to confess, “as confessions could be used in court whereas lie detector evidence itself could not,” Alder explains. Similarly, willingness to take such a test voluntarily could be seen as a sign of truthfulness.

That secondary goal means that, in theory, any plausible lie-detector test could have become the dominant method. Keeler’s method stuck because, Alder argues, he’s the one who successfully marketed the machine as not only a law-enforcement tool but also as a way for private and public companies to keep employees honest. By 1988, when the Senate passed a bill to keep employers from using polygraphs as a reason to fire workers, TIME reported that 90% of the million-plus lie-detector tests administered in the U.S. the previous year were given by companies to their workers. The U.S. government uses them for making decisions about things like security clearances.

Today, however, polygraphs appear more often in movies than they do in courtrooms. Though there’s no blanket rule about using polygraphs in trial settings, criminal courts usually don’t accept them as evidence, Alder says, in part because they are “generally considered unreliable by most academic psychologists and by reputable scientists.” For example, the National Academy of Sciences concluded the evidence produced by polygraphs, especially in the screening of employees, was “scientifically weak.” In addition, the person who administers and assesses the test has a great deal of control over how it goes. (In the course of the Kavanaugh hearings, the committee did not allow the polygraph examiner who gave Ford the test to speak.)

And yet, the idea of the polygraph has never lost its luster, and attempts to refine a more perfect lie-detector test have continued.

“They are still used in many investigative settings, for national security purposes, and as a publicity stunt,” Alder says. “They appeal to an American sense of fairness since they purport to be ‘objective.'”

And, in the absence of outside evidence, there is still no way to know for sure whether a person is lying. Those who find themselves in situations in which their truthfulness is key thus have reason to try whatever option is available, as part of a larger effort to bolster credibility and to demonstrate willingness. So, Anita Hill took a lie-detector test in 1991 when she accused sitting Supreme Court Justice Clarence Thomas of workplace sexual harassment during his confirmation hearings, and now Ford decided to take one too.

As Ford and Kavanaugh testify Thursday, Ford’s polygraph results will join the mass of evidence that Senators and the nation will use to shape their decisions about whom to believe. And while lie detectors may not be fail-proof, some relevant evidence of truthfulness in such situations does have scientific backing. For example, though sexual assault numbers are notoriously hard to gather and the methodology used comes with limitations, research does suggest that false allegations of sexual violence are rare. According to an analysis by the National Sexual Violence Center, studies generally suggest that only 2% to 10% of sexual assault cases involve false reports. 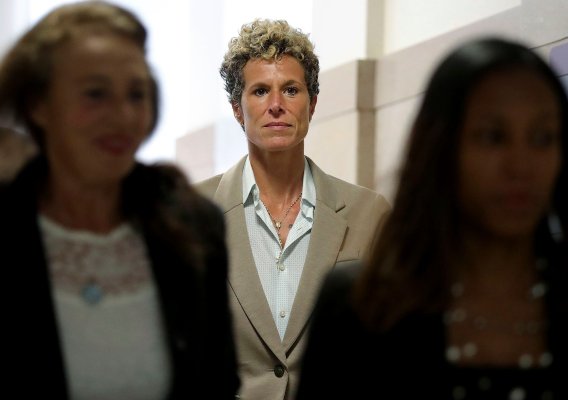