'It's Easy to Feel Powerless, But We're Not.' Barbra Streisand Takes a Stand Against Trump on Her New Song

Hello, Barbra: music icon Barbra Streisand is back on the scene with her first new original music since 2005. “Don’t Lie to Me” is an impassioned, soaring ballad with a political twist and universal emotion. It’s the first new single off her upcoming album Walls, due out Nov. 2, which follows her 2016 album of Broadway duets.

Streisand is no stranger to speaking her mind, and in a conversation with TIME she explained what drove her to the studio to record “Don’t Lie to Me” and the rest of Walls, which includes seven new compositions and four of her own takes on classics.

“My problem is what’s been happening to America. Even basic human decency seems to be melting away faster than the polar ice caps,” she told TIME. “An artist – at least – has a form of expression, which I’m grateful for. It gives me a way to let off a little steam.” Streisand dedicated the album to young people as a nod to youth like the Parkland students who she says see “right through the lies,” suggesting that the song and the album will provide both a respite and a rallying point. “It’s easy to feel powerless, but we’re not,” she says.

TIME spoke with the musical legend about her belief in active citizenship, how she even incorporated words from Abraham Lincoln into her work this time, and the importance of truth – and comfort pancakes.

TIME: It’s been a few years since you put out a new album. What brought you into the studio this time?

BARBRA STREISAND: They’re very troubling times. The leader of the free world doesn’t seem to care much about truth, and he’s chipping away at the pillars of democracy, like freedom of speech, freedom of religion, freedom of the press. I believe in the power of the truth, and I can’t stand being lied to. I don’t think the country should be lied to either. So that started me thinking about how to put down my thoughts in music and lyrics about what was on my mind. As a matter of fact, the first song from this album is called “What’s On My Mind.” And I was very driven by this president’s lies. And that’s why this first song is “Don’t Lie to Me.”

So is this song speaking directly to Trump?

Well, if you listen to it at first, maybe it could be a relationship—a woman walks into a room and sees her husband with another woman and says, ‘Who are you gonna believe? Me or my lyin’ eyes?’ To me, being lied to is very personal, very deep, because I was lied to as a child. But this is a president now…I think the total is over 5,000 lies. And I just don’t understand how the public or even his party lets him get away with that.

After he was first elected, I was funny about it: I’d say, ‘He’s making me gain weight,’ because every time I’d hear the news in the morning I’d have to eat pancakes. And the next day it would be even worse, and I’d have more pancakes and put some maple syrup and butter on it. [But now] he upsets my stomach, he upsets my mind, he upsets my whole physiology. The stress is crippling; it gives me a headache. I don’t like the way I feel. But when you hear this warped view of reality, it’s all the more frustrating. And who’s going to speak up?

What do you think is the role of the artist in this kind of climate?

It’s the same way I felt in 1995 when I spoke at Harvard’s School of Government, and I gave a speech called The Artist as Citizen. It was President Carter [who said] ‘In a few days, I will lay down my official responsibilities in this office, to take up once more the only title in our democracy superior to that of President, the title of citizen.’ First of all, we were citizens before we became artists, and every person has a right to that word – citizen. I think words have meaning and facts matter and the truth is the truth. This question of alternative facts; it’s a lot of bullsh-t. By the way, that’s why I use the “J” in the middle of my name—Barbara Joan Streisand—because I hate the letters BS and what they stand for!

I invited President George H.W. Bush and his wife Barbara to my last concert tour when I visited Houston. They came—George in his wheelchair, Barbara in her walker. They were so lovely, so gracious; they had such dignity. I loved that President Bush knew how to work across the aisle. The other day I returned a call from Bob Dole, a Republican. He kindly wanted to tell me that my music helped him recuperate from his last illness. I’m also friends with Colin Powell, William Cohen—Republicans who are decent people! There are some great Republican Senators too, like Jeff Flake and Bob Corker, who are not afraid to speak truth to power. With rational Republicans, you can agree to disagree. That’s what it comes down to: person over party!

The album is called Walls. Where did that title come from?

Well, we have a president who wants to build walls, and that got me thinking—walls can be structural, and walls can be emotional; walls between people. So I asked my dear friends Marilyn and Alan Bergman to write a song for this album, and it came out as “Walls,” which says we would have that better day if all those walls came tumbling down. I hope we find a way to tear down walls and build more bridges instead. There’s also a very hopeful song on this, “Better Angels,” that was inspired by Lincoln’s first inaugural address. It reminds us of who we have the potential to be when we listen to the better angels of our nature.

Do you feel pressure as you put out this album or think about the reception to this song?

I don’t care whether it sells or not. Last night I played the song to my masseuse and she didn’t even know I wrote it, and she said, ‘What’s that song? It’s so catchy!’ So that’s a good sign. I hope other people can identify with it.
John Lennon and Yoko Ono’s “Imagine” I put together with “What a Wonderful World.” The last line, “I think to myself,” I changed it to “I think it could be a wonderful world.” I even do a new interpretation of my song “Happy Days Are Here Again;” I wanted a kind of symphonic story of dread. [Laughs.] That’s what I did. 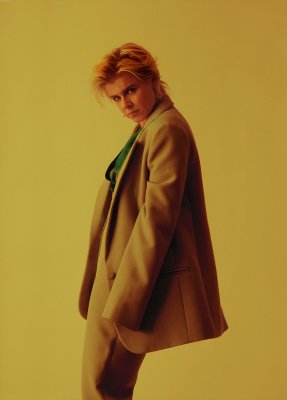 How Robyn Beat Depression to Make the Best Music of Her Career
Next Up: Editor's Pick