'They Don't Want Me to Win.' President Trump Accuses China of Meddling in 2018 Elections in U.N. Security Council Speech

President Donald Trump accused China of meddling in the 2018 elections in order to hurt him Wednesday.

Speaking at a meeting of the United Nations Security Council, Trump claimed, without offering evidence, that China was attempting to interfere with the upcoming midterm congressional elections.

“Regrettably, we found that China has been attempting to interfere in our upcoming 2018 election, coming up in November, against my Administration,” he said.

“They do not want me, or us, to win, because I am the first president ever to challenge China on trade, and we are winning on trade. We are winning at every level. We don’t want them to meddle or interfere in our upcoming election.”

Over the summer, Republicans in Congress introduced legislation that would require an unclassified report on Chinese political influence operations in the United States, driven in part by heightened concern over Russian meddling in the 2016 election.

In August, National Security Advisor John Bolton argued that China, Iran, North Korea and Russia may be seeking to meddle in the 2018 elections, arguing that they are a “national security concern.” Trump echoed those comments on Twitter.

In recent months, China has responded to the Trump Administration’s stricter moves on trade with tariffs that target some key Trump voters, such as soybean farmers in the Midwest.

Speaking with reporters Wednesday afternoon, a senior Administration official cited the targeted tariffs, bureaucratic moves that make it harder for journalists to report in China and attempts to limit the academic freedom of Chinese students studying on American campuses, among other things, as part of this electoral interference.

Wang Yi, China’s foreign minister, later addressed council on what he called the “unwarranted accusations against China” by saying that Beijing has a policy of “non-interference” in other countries’ “domestic affairs.”

During discussions of Russian meddling, Trump has long argued that other countries might have also meddled, including China, or that Russia might not have interfered at all.

“I don’t think anybody knows it was Russia that broke into the DNC,” he said during the first presidential debate with Hillary Clinton in 2016. “She’s saying Russia, Russia, Russia, but I don’t — maybe it was. I mean, it could be Russia, but it could also be China. It could also be lots of other people. It also could be somebody sitting on their bed that weighs 400 pounds, OK?” 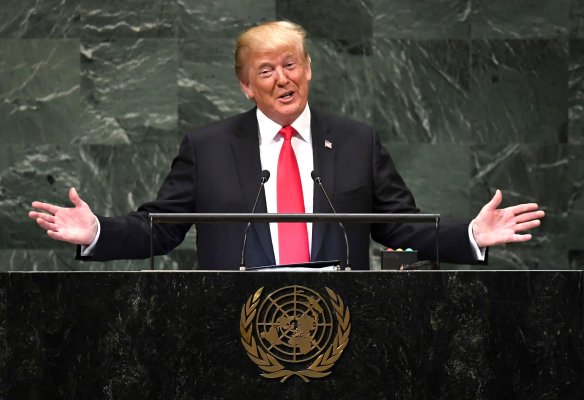 Trump Took 'America First' to the United Nations
Next Up: Editor's Pick