The U.S. airline grounded all domestic flights Tuesday to deal with a technology issue that affected some of its systems. About an hour later, Delta said it had restored all its systems, allowing the services to resume.

While the carrier said there were no disruptions or safety issues with any flight, the systems failure was the third in as many years that forced Delta to shut its operations. In January last year, a 2 1/2-hour computer breakdown grounded domestic flights. Delta’s worldwide computer systems failed in August 2016, causing massive cancellations.

“There are currently no Delta flight cancellations following a brief technology issue that prompted an hour-long groundstop for U.S. mainline Delta flights this evening,” the carrier said in an updated statement on its website. Delta said additional flight delays and the impact on the Wednesday morning schedule were “expected to be minimal.”

@HagePhoto:@Delta is shut down. Nobody knows anything. Can’t reclaim our checked gear. Claiming their system has been wiped. Advise us to wait indefinitely or go home. Sure, we’ll go home but we kinda need our GEAR!!! #deltasucks @SaraCrowdCheck:@Delta At what point does a nonrefundable ticket become refundable because of delays? My flight is now nearly 9 hours late. @StefTasman:@Delta now it says 11:30?! After I already rushed to get to the airport. What is going on???

Ground stops, as the Federal Aviation Administration calls them, are relatively common reactions to thunderstorms and other disruptions in the U.S. aviation system. They are typically short-lived and narrowly drawn, such as halting departures to a congested airport for an hour or two.

A severe storm disrupted operations at Delta’s Atlanta hub in April last year, with delays being made worse by a breakdown in the airline’s crew location and assignment systems. About 4,000 flights were canceled in the wake of the storm, and Delta offered hundreds of thousands of customers $200 flight vouchers or 20,000 bonus frequent-flier miles as part of an apology for the flight cancellations.

This came after a fire at the company’s computer center in August 2016, when the carrier scrapped about 2,000 flights and highlighted the vulnerability of airlines’ complex networks that have expanded through the decades and are in need of overhauls.

Still, Delta isn’t the only U.S. carrier to have suffered from technical glitches. In December 2017, a fire at Atlanta’s airport, the world’s busiest hub, caused a major electrical disruption, crippling services and stranding thousands of passengers of Delta as well as rivals including Southwest Airlines Co. 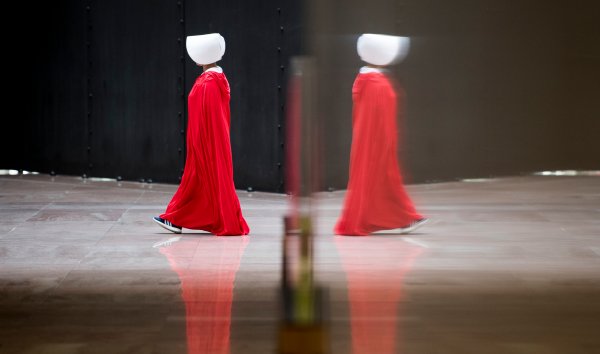 People Got So Mad About This 'Sexy' Handmaid's Tale Costume That the Company Is No Longer Selling It
Next Up: Editor's Pick