When Dr. Michelle Oblak, a veterinary surgical oncologist at the University of Guelph’s Ontario Veterinary College (OVC), first met Patches, the dachshund was suffering from a cancerous skull tumor so large, it was weighing down her head and beginning to encroach on her brain and eye socket.

The tumor had to come out — but removing it would also mean removing part of Patches’ skull. So, in a North American veterinary first, according to an announcement from OVC, Oblak 3D-printed her a replacement.

“The technology has grown so quickly, and to be able to offer this incredible, customized, state-of-the-art plate in one of our canine patients was really amazing,” Oblak said in the statement.

Oblak, who studies the relationship between human and canine cancers as co-director of the University of Guelph’s Institute for Comparative Cancer Investigation, first pinpointed the exact location of Patches’ tumor. Then she teamed up with an engineer from Sheridan College to create a three-dimensional model of the dog’s head and tumor, allowing her to plan out the difficult surgery and determine the exact dimensions of the skull plate she’d need, according to OVC. Oblak enlisted ADEISS, an Ontario-based 3D-medical-printing company, to make the piece she needed.

By the time Oblak and Cornell University small-animal surgeon Dr. Galina Hayes entered the operating room, they knew exactly how they would remove Patches’ tumor, and had the 3D-printed piece ready to slide into the dog’s skull.

“She was asleep for about five hours, and within about half an hour after surgery, Patches was alert and looking around. It was amazing,” Oblak said in the statement.

And the procedure did more than save Patches — Oblak said it could offer a blueprint for someday performing similar surgeries in humans. “In human medicine, there is a lag in use of the available technology while regulations catch up,” she said. “By performing these procedures in our animal patients, we can provide valuable information that can be used to show the value and safety of these implants for humans.” 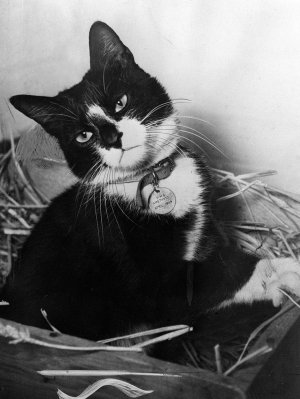 The Surprising Story of the Only Cat Ever to Win the Highest Honor for Animal Military Gallantry
Next Up: Editor's Pick