Andrea Constand told a judge that Bill Cosby “took my beautiful, healthy young spirit and crushed it” when he sexually assaulted her in 2004.

In a powerful victim impact statement, the former Temple University employee detailed how Cosby’s assault changed her life — and how the subsequent legal battle left her drained and exposed to attacks on her character, including being called a gold-digger and a liar.

Constand did not read her statement at the sentencing hearing. Instead, she just said a few words, asking for “justice as the court sees fit” and submitted the written statement in full to the judge.

But, she said she knew testifying was ultimately the right thing to do.

“I wanted to do the right thing, even if it was the most difficult thing I’ve ever done. When the first trial ended in a mistrial, I didn’t hesitate to step up again,” Constand wrote. “I know now that I am one of the lucky ones. But still, when the sexual assault happened, I was a young woman brimming with confidence and looking forward to a future bright with possibilities. Now, almost 15 years later, I’m a middle-aged woman who’s been stuck in a holding pattern for most of her adult life, unable to heal fully or to move forward.”

She added that she lives alone and considers her immediate family members her closest friends. She said that her life revolves around her work as a therapeutic massage practitioner. Now, she wrote, she’s looking forward to getting on with her life.

“Instead of looking back, I am looking forward to looking forward,” she added. “I want to get to the place where the person I was meant to be gets a second chance. I know that I still have room to grow.”

Cosby was found guilty earlier this year of drugging and sexually assaulting Constand in 2004, and he will be sentenced on Tuesday in Montgomery County, Pennsylvania after a two-day hearing. He has been accused of sexual misconduct by at least 60 other women, but only Constand’s but only allegations resulted in criminal charges.

Cosby has denied all allegations of sexual assault, and his lawyer has said he plans to appeal the conviction. He is not expected to speak in court on Tuesday.

Constand pursued a civil suit against Cosby in 2005 after Montgomery County prosecutors declined to press charges. Cosby paid Constand $3.38 million in 2006 as part of a confidential settlement, in which Cosby did not admit to wrongdoing. Cosby’s defense attorneys argued that the settlement made Constand a “con artist,” while Constand said she settled because her family just wanted the process to be over.

Constand has only given one interview detailing the 2004 attack since the trial. Before the sentencing, she tweeted a Bible verse that read, in part: “Be wrathful, but do not sin.” 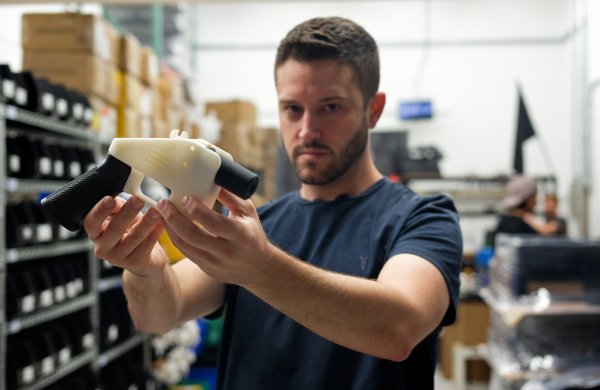 3D-Printed Guns Advocate Arrested in Taiwan
Next Up: Editor's Pick