It was a tough start for Gritty, the viral new mascot for the Philadelphia Flyers hockey team, who made his game debut on Monday — and promptly slipped and fell on the ice.

Legs flailing, orange fur bright against the white ice, Gritty makes quite a picture of a floundering mascot. Luckily he was decked out in his helmet to keep his head protected during the fall — and we can guess that his voluminous mascot costume at least provides for plenty of padding, a nice layer of protection against the cold, hard ice.

But it’s not a particularly auspicious starting point for a character who has already raised eyebrows with his googly eyes and distinctive posture. And unfortunately the Flyers also had a rough day of it, falling 4 to 3 in a preseason game against the Boston Bruins. (Their mascot, meanwhile, is the rather more dignified Blades, a fierce ice-skating brown bear.)

Better luck next time to both Gritty and his teammates as they take on the New York Rangers on Thursday in another preseason matchup. The Rangers don’t have a mascot, so at least Gritty won’t have much competition on that side of things. 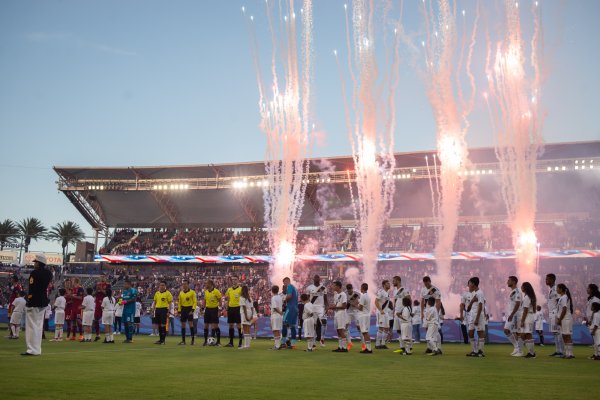 Gifted Seven-Year-Old Goes Viral for Demonstrating How the National Anthem Is Done
Next Up: Editor's Pick