Emma Stone is happy to lie to you—especially if it’s for a good cause.

Stone stopped by The Late Show on Monday night to help Stephen Colbert save the lives of puppies displaced by Hurricane Florence in the latest installment of Rescue Dog Rescue. Because puppies generally sell themselves, why did Colbert need Stone’s involvement? “Everyone loves puppies, so the only way to make them even more adoptable is to have a celebrity lie on the puppies’ behalf,” Colbert said and Stone was more than happy to lie on the puppies’ behalf.

The two stars teamed up to come up with a few whoppers “designed to get you to adopt” the rescue dogs. For instance, Dwayne, a shepherd mix. “The Rock was named after him,” Colbert claimed. Then there is Riggs who Stone claims “sees too many colors because he brews his own ayahuasca” and Olive, a terrier mix, who has been working as a private security consultant for Robert Mueller’s investigation into election meddling. “She’s ready to tell you some stuff that will blow your mind,” Colbert said. “What’s that, Olive? Donald Jr. did what in Moscow? Wow!”

While that is impressive, Owen allegedly directed the Best Picture Oscar winner Spotlight. “Don’t believe me? Then search your brain,” Colbert joked. To bring home any of these dogs head to the website for the North Shore Animal League America. 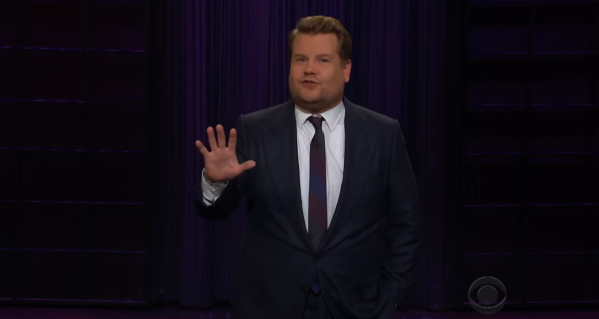