Senator Antonio Trillanes IV became the second lawmaker in less that two years to be arrested in the Philippines Tuesday in what human rights groups say is a “relentless campaign” to silence the critics of President Rodrigo Duterte.

Trillanes handed himself over to authorities shortly after a regional trial court issued a warrant for his arrest, the Philippine Daily Inquirer reports. He had been holed up in the Senate building for three weeks following a presidential proclamation ordering the immediate revocation of amnesty granted under a previous administration. Until today, authorities had declined to detain Trillanes without a court ordered warrant.

“Today, our democracy lost,” Trillanes said in a statement released after his arrest. “This is pure harassment by Mr. Duterte against his political critics and to those who are voicing out the truth. Darkness and evil prevail in this country. Whatever happens in the future is in the hands of the Filipino people.”

Read more: The Senate Standoff: How Duterte’s Attempt to Arrest Another Critic Is Testing Philippine Democracy

Trillanes had long provoked Duterte’s ire, condemning his drug war — which human rights groups say is responsible for at least 12,000 deaths — accusing him, his son, and members of his administration of corruption, and supporting the International Criminal Court’s preliminary examination into alleged extrajudicial killings.

His arrest is “the latest in the relentless campaign to silence those who dared to challenge the president’s murderous ‘drug war,'” Carlos Conde, a researcher at Human Rights Watch’s Asia Division, said in a statement. Trillanes’ detention could have a “chilling affect” on other critics, Conde wrote.

It follows the jailing of fellow critic, Sen. Leila de Lima in February 2017, threats to impeach Vice President Leni Robredo after she criticized Duterte’s drug war, threats to arrest the Ombudsman after she launched an investigation into Duterte’s family finances, and the ouster of Chief Justice Maria Lourdes Sereno from the Supreme Court.

For de Lima, the persecution of Trillanes feels familiar. “Trillanes is a threat as I am a threat, as free speech and democracy are a threat to Duterte,” she wrote TIME from her cell days after the president revoked his amnesty.

Police arrested de Lima on drug-related charges more than 18 months ago, following an investigation she launched into alleged extrajudicial killings during the drug war. “As president, [Duterte] cannot outrightly murder political opponents without creating a national crisis,” De Lima added, so instead he resorts to “jailing us as common criminals.” 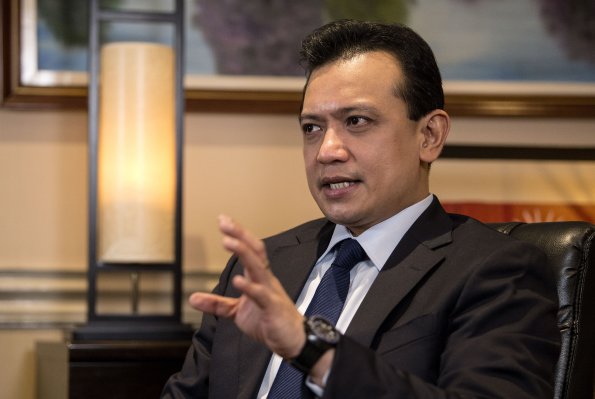