Cary Fukunaga isn’t sure that everyone will get his new Netflix limited series Maniac. And he’s OK with that. “Maybe me saying it’s weird is just softening the blow for people who just don’t get it or don’t want to get it,” he says.

Fukunaga, best known for his Emmy-winning direction on the first season of True Detective, has returned to television as director and co-creator of one of Netflix’s most intriguing ventures yet.

But Maniac viewers are in for a rather trippy experience. Emma Stone and Jonah Hill play two patients in a drug trial, Annie and Owen. Their lives start to intersect when they begin to appear in one another’s hallucinations while taking the experimental drug.

Outside the laboratory, things are already pretty bizarre: Fukunaga combines a retro 80s aesthetic with dystopian futurism and swearing stuffed animals playing chess to create the protagonists’ world. Once Annie and Owen start popping pills, their hallucinations leap across genres, from Lord of the Rings fantasy to Dr. Strangelove surreal comedy.

Fukunaga spoke to TIME about why he rewrote a Norwegian Netflix series for Emma Stone, tackling mental illness and symbols that crop up throughout the show.

Maniac is loosely based on a Norwegian series. What did you change?

We didn’t pull much besides the idea of delusions. There’s one male protagonist in the original, and I wanted to work with Emma Stone. So the characters were going to have to change. She did not want to play a therapist fixing a man’s problems or a manic pixie dream girl who is just a foil to the male character.

Why was it appealing to dive into delusions?

You spend so much time with a show, and being able to play with different rule and set pieces was appealing. But we didn’t just want a grab bag of Hollywood genres. We wanted the actors to be able to play against type.

There were so many different iterations and worlds that were put up on boards that never made it to the final screen. I wouldn’t say that those are my dream genres I’ve been itching to play with. It just kind of wound up there. I don’t even know how.

The show is ultimately about two people with mental-health issues helping each other. What draws them together?

They’re both very lonely people. They put up walls, and the delusions break them down.

Are you skeptical that a pill, or even therapy, can solve all your problems?

I don’t want to be confused with being anti medication because pills save people’s lives. But I think there’s no quick and easy pill that can fix things permanently. And we question why we want to “fix” things and what is normal or acceptable in society. We want to challenge the stigma around mental illness.

The characters exist in a dystopian world: you can earn money by having someone follow you around and read ads. How did you build that world?

It would have been easier to set the show in New York, 2017. But we wanted to make clear that their baseline reality is not the same as ours. We wanted to create a reality that wasn’t too far off from our own.

Why does Don Quixote keep appearing in the series?

Don Quixote does relate to both of their characters. His break from reality and the lessons learned within Cervantes’ book mirrors a lot of what we’re doing.

And what’s with the Rubik’s Cube?

Patrick and I have had a lot of conversations about the Rubik’s Cube. It’s actually a puzzle that is solved by algorithms. It seems incomprehensible to someone who doesn’t know how it works, and if you do know how it works you can solve it in seconds. Owen is a lonely person who wants to be a hero of his own life. He’s always doing it without looking at it because he wants to see if he can see it without looking to see if he has a superpower. I know that sounds weird, but that’s what it means to me at lest.

As a journalist, I was fascinated by Ad Buddy, which feels about five years away in our industry, at least.

We wanted to create a reality that wasn’t too far off from ours but with slight changes to tech. As different as this world is, we wanted to exemplify it without explaining a whole mythology of it. Ad buddy came up as what are the things that people will interact with in a banal way that would be weird to us.

We had another idea that didn’t make it into the show, but I really wanted it to. It’s called TherapyV. It’s like a photo booth but you go in there and talk to a therapist. 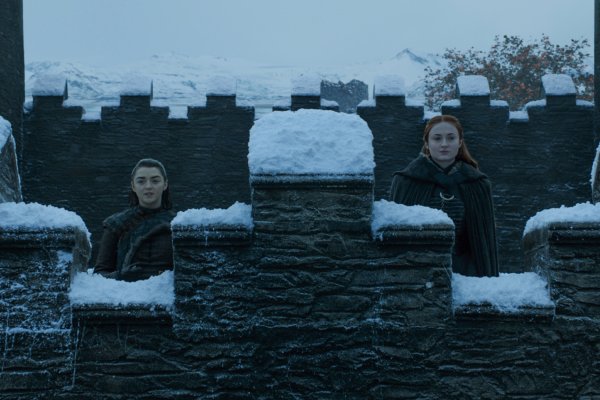 Game of Thrones Fans Will Be Able to Hang Out At Winterfell and Keep the Fantasy Alive
Next Up: Editor's Pick