President Obama walks to the Rose Garden of the White House on April 1, 2014
Manuel Balce Ceneta—AP
By Michael Crowley

The mood could not have been cheery when Barack Obama met with his Secretary of State at the White House on Tuesday afternoon. When John Kerry arrived at Foggy Bottom in February 2013, he persuaded Obama to sign off on a new U.S. effort to restart the long-dormant Middle East peace process. Obama was skeptical: he’d waded into those jellyfish-infested waters in his first term and had come out badly stung. But Obama allowed Kerry to proceed, bucking him up with strong pro-peace rhetoric.

Kerry coaxed the Israelis and Palestinians to the bargaining table in June. On Tuesday, three weeks before the original deadline for a deal, he returned to Obama empty-handed. Last week both sides took actions that the other called a sabotage of the talks (although Kerry pointed a stern finger at the Israelis). When Kerry appeared before the Senate Foreign Relations Committee on Tuesday morning, Republican Senator John McCain declared the peace talks “finished.”

Not so, Kerry retorted. “The Israelis and the Palestinians don’t declare it dead. They want to continue to negotiate.” That’s technically true: Israeli and Palestinian negotiators have continued to talk, including in a Monday night meeting brokered by the U.S.

The question now is whether this is just pantomime. Are the two sides still meeting for purely public relations purposes — to demonstrate a faux good faith to the world? Or are they still capable of cutting a deal?

It wouldn’t be surprising to see Obama conclude that the process is hopeless, at least for now. Many others in Washington have. Last week’s effort by Kerry to secure Israeli concessions through the release of Jonathan Pollard, convicted of spying for Israel, had carried a whiff of desperation that suggested Washington wants a deal more than the Israelis do.

But it’s also possible that Israeli Prime Minister Benjamin Netanyahu and Palestinian Authority leader Mahmoud Abbas are engaging in brinkmanship to maximize their leverage. A former Obama State Department official notes that it’s not unusual for high-stakes negotiations to near collapse just before a final deal rises forth from the flames. Think of the 11th-hour game of chicken in Washington’s debt-limit crisis in October.

If Obama thinks that might be the case, one foreign government official who closely monitors the talks says the U.S. should remove itself from haggling over process issues like prisoner releases and simply lay a framework peace deal on the table. Kerry would require the two sides to accept or reject it in principle. They could haggle over details later. The basic principles of such a plan — including limited right of Palestinian refugee return, a divided capital in Jerusalem, some medium-term Israeli security presence in the Jordan River Valley — wouldn’t surprise anyone.

But another push would be risky. Obama and Kerry are already dodging charges of naiveté and impotence in the region. Committing publicly to a plan that fails would compound a moment of perceived American weakness.

That said, there’s also a risk in letting the talks die: possible new boycotts and isolation of Israel, a potential collapse of the Palestinian Authority and maybe even new violence. “The alternative to getting back to the talks is the potential of chaos,” Kerry warned in November. “Does Israel want a third intifadeh?”

To be sure, the consequences may not be so dire. The prospect of violence in particular could be overblown, thanks to improved Israeli security and a higher standard of living for West Bank Palestinians, says one Arab government official.

But there’s also worry that this is the last, best hope for a peace deal. “We may not get another chance,” Kerry warned as this round of talks kicked off last summer.

Of course, when Obama began his first stab at a peace deal in September 2010, he spoke of a “moment of opportunity that may not soon come again.”

Another moment did come, however. And its demise may not be the end of the story. “We’ve had lots of diplomatic breakdowns between Israel and the Palestinians,” says one person close to Israeli officials who thinks this round is likely finished. “The peace process will rise again.”

If Obama truly disagrees, he’ll have to decide whether it’s worth making a dramatic — and risky — gesture to salvage it. 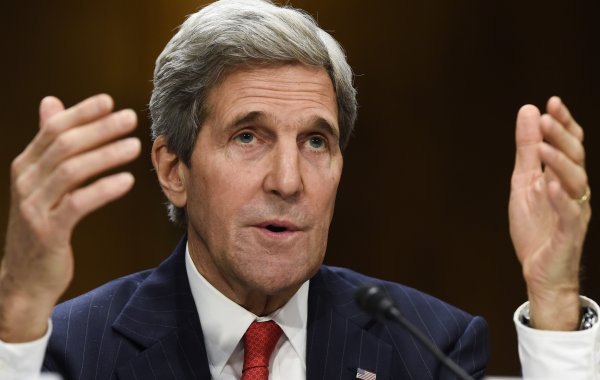 Kerry: Half of Syria's Chemical Weapons Are Gone
Next Up: Editor's Pick