As floodwaters recede after Hurricane Florence and residents take stock of the damage, fire crews are dealing with a new challenge — disposing of thousands of dead fish left stranded on sections of roadway.

“We can add ‘washing fish off of the interstate’ to the long list of interesting things firefighters get to experience,” posted the Penderlea Fire Department on their Facebook page alongside photos and video of crews with firehoses spraying the fish off the roadway.

Fire crews had been deployed to a recently flooded section of I-40 in Pender County, N.C., where they found thousands of dead fish rotting on the asphalt.

“None of our [firefighters] had ever seen something like that, it was a strange sight,” a spokesperson for the Penderlea Fire Department told TIME. “The smell was quite intense and clung to our clothes/vehicles. Many of the fish had been there for a day or more and burst from the heat.”

In recent days, the fire department had been involved in distributing water, food, tarps and other supplies to local residents after the storm, according to their Facebook page. The crew had also been tasked with attempting to clear the dead fish off the roadway with the equipment they had at their disposal.

“We were asked to clear a few hundred yards to see how feasible it would be as a clearing method. The fish pose a hazard motorists on the interstate, whenever it can be reopened,” a spokesperson for the Penderlea Fire Department said. “After that initial section, we reported back that [the Department of Transportation] may be better tasked with the job based on the equipment they have.”

At least 44 people have died since Hurricane Florence passed over the Carolinas last week. The North Carolina Department of Public Safety has warned that floodwaters may recede slowly, and that formerly flooded roads may have suffered structural damage. 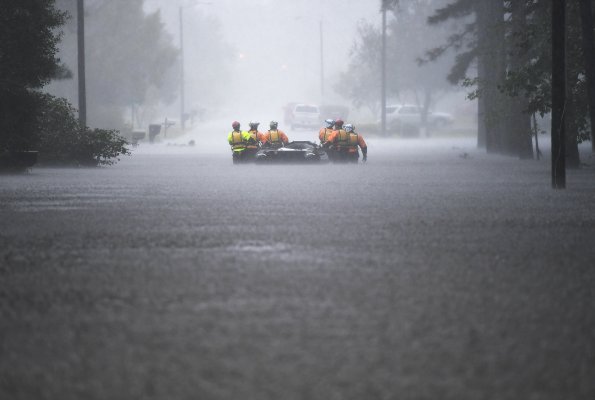 Florence Kills 32 As Torrential Rains Continue
Next Up: Editor's Pick