Ukraine on the Brink as East Looks to Break Away

Ukraine looked like a country on its way to civil war on Tuesday, as it struggled to control eastern cities allied with Russia while Moscow looked to capitalize on the unrest and the U.S. was left with little to do but look on.

The new Ukrainian government in Kiev decried as “separatists” men who took hostages in a security-services office in Luhansk, one of three eastern cities where the government has clashed with pro-Russia protesters in recent days, the Associated Press reports. Ukrainian officials were able to recapture control of a headquarters building in one city. But hostages remained in another, and tensions were evident in the capital, where a fistfight broke out in the parliament. Parts of the region want to break away from Ukraine, raising tensions after Russia annexed the peninsula of Crimea.

Secretary of State John Kerry claimed Russian agents were seeking to instigate unrest in Ukraine, something he called “absolutely unacceptable” and akin to creating a “contrived pretext for military intervention.”

“Everything that we’ve seen in the last 48 hours from Russian provocateurs and agents operating in eastern Ukraine tells us that they’ve been sent there determined to created chaos,” Kerry said while testifying before the Senate Foreign Relations Committee. “Russia’s clear and unmistakable involvement in destabilizing and engaging in separatist activities in the eastern Ukraine is more than deeply disturbing.”

Over the past few days, hundreds of protesters in three eastern Ukrainian cities have demanded a secession referendum and scores have been detained, complicating Ukraine’s attempts to implement austerity reforms required by the International Monetary Fund as a condition for an $18 billion loan the country needs to avert financial default. Ukraine is holding presidential elections in May.

Russia, however, was quick to trumpet the protests as proof that Ukraine’s new government is already losing control of its people, accusing it of sending armed troops to the east to crack down on legitimate protests. “We are calling for the immediate cessation of any military preparations, which could lead to civil war,” the Russian Foreign Ministry said in a statement.

In Washington, Kerry warned against Russian efforts to create a climate in which a pro-Kremlin eastern Ukraine would welcome annexation.

“If they proceed down that road that will be a second swing at a completely illegal, unconstitutional, internationally unsupportable effort to violate the territorial integrity of Ukraine,” he said. “We owe it to ourselves to exhaust the remedies that the diplomatic process might provide.”

Kerry also beat back Republican criticism of President Barack Obama’s policy toward Russia, especially when Senator Jim Risch of Idaho said “the Russians are misbehaving worse than they have in decades.”

“Let me give you what I consider a taste of reality,” Kerry said. “[Russia’s 2008 invasion of] Georgia happened under George Bush,” he said, “and he didn’t even bring a sanction.”

“President Obama has brought sanctions, and it’s having an impact,” Kerry added. “And the fact is, it will have a far more serious impact if they cross over or continue what’s happening in East Ukraine … Now, I don’t know anybody in the United States of America who said we ought to go to war with Crimea — is there any member of this committee who believes that?”

Responding to the silence, he said, “I don’t think so.” 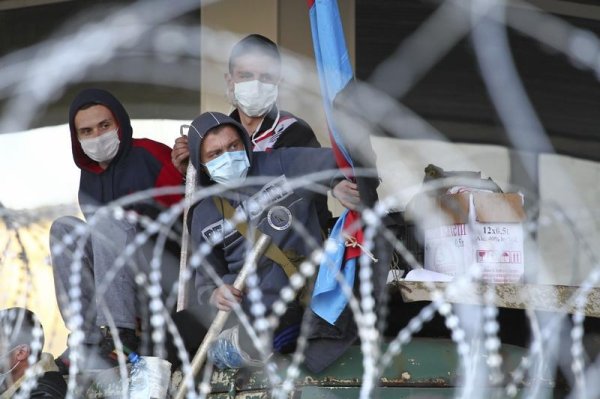 Ukraine Arrests 70 in 'Anti-Terrorist' Raid
Next Up: Editor's Pick