Maniac is not your typical puzzle box story. The Netflix limited series resists grand mysteries, conspiracy theories and Reddit-fueled debates, instead focusing on the relationship between two characters—rather than “the pattern” that one of the characters insists exists in the world.

Still, the show is filled with connections and callbacks that reward repeat viewing. When Annie (Emma Stone) and Owen (Jonah Hill) begin the drug trial and their hallucinations, the same characters, symbols and themes pop up over and over again in their shared dreams. Often, these motifs are manifestations or reinterpretations of what the pair have experienced in “reality”—if there even is a reality in the world of Maniac.

Here are some of the symbols, connections and tidbits you may have missed while bingeing the cerebral new Netflix series.

Owen’s last name is Milgram, likely a nod to social psychologist Stanley Milgram’s controversial experiment on obedience. Milgram, fascinated by the trial of Nazi war criminal Adolph Eichmann, wanted to examine the plausibility of Eichmann’s excuse that he and his fellow Nazis were just “following orders.” So he formulated an experiment to test people’s capacity for cruelty.

In the experiment, someone in a lab coat (an “authority figure”) instructed subjects to administer electric shocks to what the subjects believed to be another person in the next room. (In fact, no second subject existed.) A startling number of people complied with requests to torture another person just because an official-looking person asked them to do so.

The nature of the experiment loosely ties to the fact that Owen and Annie, two subjects in the same experiment, have the ability to help or hurt each other in their hallucinations. The reference also calls into question the morality of the authority figures running this experiment, and in the case of Maniac, the drug trial.

The name also adds a sinister air to the cartoonish and corrupt family that will defend a favored son’s abuse while refusing to paint the black sheep (Owen) into the family portrait. (Owen’s own hilariously tiny Wes Anderson-style portrait hangs beside the giant painting.)

When Annie steals change from a newspaper kiosk at the beginning of episode one, we see a headline that confirms the Milgrams made their fortune creating the dog poop cleaning robots. A headline reads, “Bladdergate: Milgram Poop Bot Empire in Peril,” and shows pictures of all five brothers, including Owen. The “bladdergate” reference points to the accusations against Owen’s abusive brother, Jed (Billy Magnussen), that he forced a woman to urinate on him.

Throughout the show, Owen constantly plays with a Rubik’s Cube. Director Cary Fukunaga told TIME that Owen’s fiddling with the toy has a deeper meaning. “It seems incomprehensible to someone who doesn’t know how it works, and if you do know how it works you can solve it in seconds,” Fukunaga says. “Owen is a lonely person who wants to be a hero of his own life. He’s always doing it without looking at it because he wants to see if he can see it without looking to see if he has a superpower.”

The show uses the colorful symbol to hint at the connection between Annie and Owen before they even meet. Annie pulls a Rubik’s Cube out of a pile of trash on the sidewalk outside of Milgram Industries and tosses it aside in the first episode. Owen picks it up. (You can see him behind her in the shot.) Also of note: She ultimately ends up taking Don Quixote from the trash pile instead.

Annie swears to finally read Don Quixote once she beats her addiction in the second episode. The book appears again in episode five as Annie and Owen search for the secret chapter of Don Quixote inside a mansion during a seance.

Annie later explains that her sister read Don Quixote when she was 12, and their dad used to bring that fact up as proof of how gifted she was. Fukunaga also explained that Don Quixote’s adventurous spirit—and his inability to separate fact and fantasy—underlines the show’s themes: “Don Quixote’s break from reality and the lessons learned within Cervantes’ book mirrors the experience of both of the characters.”

“Not much of a difference, authority-wise”

We first hear a security guard say this to Annie when she takes Don Quixote from the pile of trash in episode one. “Are you a cop?” she asks. “Not much difference, authority-wise,” he replies. Annie then drops that phrase into one of her hallucinations: In episode four, the Fish and Wildlife investigator says the same thing to the fur salesman who challenges his authority.

The mother of Dr. James K. Mantleray (Justin Theroux), Dr. Greta Mantleray (played by Sally Field), looms large over the story long before she actually appears in the series. Owen is reading her book, No Fix, Just Bliss, in the first episode. And of course, James seems to have named the computer behind his experimental trials after his mother: GRTA. She even wears glasses like his mother.

We also get a hint at her influence within the hallucinations. In the episode four, Owen is reading her book again as he waits for Annie to exit the DMV. More subtly, Annie’s father’s voice can be heard briefly on the car radio telling the famed psychiatrist that he’s having trouble with his two daughters in that same episode.

Nines and ones everywhere

Annie and Owen are subjects number nine and number one in the experiment. In their hallucinations, nines and ones crop up over and over again.

The license plate on their car is O19 91A during the lemur hallucination in episode four.

In episode five, Owen pulls a 9 of hearts during a magic trick before the seance.

In episode seven, Owen hallucinates that his family runs a crime syndicate based out of a mortuary called Milgram Memorials. The address 1101 can be seen on the door to the building.

In the episode nine, Annie plays a spy who helps sleeper agent Owen escape from the ninth floor of the government building.

The symbol of the moon

Owen turning into a hawk is a callback

This choice in the final hallucination may seem totally bizarre, but remember that in the first episode, Owen’s brothers’ mocked him for nursing an injured hawk back to health. The hawk was able to take vengeance on Jed’s pet in a way that Owen was never able to fight back against Jed himself. So the animal could represent freedom to Owen.

A bonus for die-hards: Netflix’s autoplay function leads many people to skip over the credits, but if you wait until the Paramount insignia pops up at the end every episode, you can actually hear Owen yell, “Annie, I’m a hawk!”

We saw Snorri in the first episode

Owen sees the name “Snorri” in an ad for Icelandic Fish in the first episode, and plays a man named Snorri in the ninth episode. (N.B. The ad for Snorri was juxtaposed with the tagline, “If you could eat like the chosen one.” And Snorri does, indeed, end up saving the world with his Rubik’s cube prowess.)

Wendy the lemur shows up in the last episode—sort of. When Annie visits Owen, she signs in as “Wendy Lemuria.”

Cary Fukunaga gets self referential

In fact, Fukunaga seems to have taken one of the props from True Detective with him. In the final episode of Maniac, Owen’s brother Jed sits at a table with the same Big Hug Mug that Rust Cohle had in the True Detective interrogation scene.

Episode three, in which Annie and Owen play a Long Island couple in pursuit of a lemur, pays homage to the Coen brothers’ beloved Raising Arizona, according to Fukunaga.

Lord of the Rings

Episodes seven and eight pull aspects from the classic fantasy novel and its subsequent film adaptation.

At one point, Ellie (Garner) and Annie (Stone) are in a Lord of the Rings-style fantasy
Michele K. Short / Netflix

When Annie saves Owen from an inquiry at the United Nations, the setting looks just like that of the Stanley Kubrick classic.

Eternal Sunshine of the Spotless Mind

Scientists trying to tear apart two people who are reaching out to one another through a combination of memory and hallucination? Many critics have drawn the parallel between the movie and Maniac.

In the first episode, Owen’s retro computer and 90s-esque cubicle look like the office in The Matrix. Like Neo, Owen will soon enter a new (and more engaging) reality.

In the final episode, James and Azumi kiss and escape the dreary world of the laboratory—after James is unceremoniously fired. But as the two drive away, their beaming faces begin to fade, likely a callout to the famed ending of The Graduate. (Annie and Owen’s road trip appears more promising.)

Is ending yet another hallucination?

There are plenty of parallels between Annie and Owen’s actual lives and their hallucinations. For the most part, it seems as if the pair unconsciously incorporate actual people and places from real life into their delusions.

But a few aspects of their delusions show up later in the real world, calling into question whether the real world is “real” at all. Perhaps the entire show takes place inside GRTA’s hard drives. Here are a few moments that suggest Annie and Owen didn’t get their happily ever after, after all:

Azumi tells one of her assistants that the password to the mainframe room is 5-6-7-8. This is, of course, after Owen and Annie discover that 5-6-7-8 is the updated combination to the fur store lock in episode four. There’s almost no way that Owen and Annie could have known that this was the mainframe password before having they had their first joint delusion. Therefore, Azumi trying to break back into the mainframe could also be a delusion.

One user on Reddit pointed out that the Volvo that Annie and Owen drive in episode four has the same license plate of the car James walks toward in the final episode. Perhaps Owen or Annie saw that car earlier and remembered the license plate (filled with 0s and 9s) to incorporate into their dreams. Or James and Azumi are just a part of another hallucination.

Owen and Olivia have a hallucination in which they have seven children named Asia, Africa, Australia, etc. Later, Greta tells James that she’s setting out on a book tour with stops on “all seven continents.” Annie and Owen likely would not have known that before the hallucination.

In episode six, Owen describes a fantasy he has: “We were in a car. We were driving really fast. Someone was chasing us, I don’t know who. It felt like an escape. I was just laughing. I had this huge smile on my face. It hurt it was so big. And we were just two people looking out for each other.”

That comes to pass in the final moments of the last episode. Did Owen’s dream come true? Or did he just dream it once again?

In the last shot, a hawk on a Poop Bot and the dog that Annie once lost follow behind Annie and Owen’s car. Perhaps these animals are just roaming along the east coast. Alternatively, they could represent the two patients’ happy endings. Annie finding her sister’s lost dog would represent some semblance of closure, while Owen’s mended Hawk riding high on his family’s invention could represent that he has finally beaten his family by finding freedom. 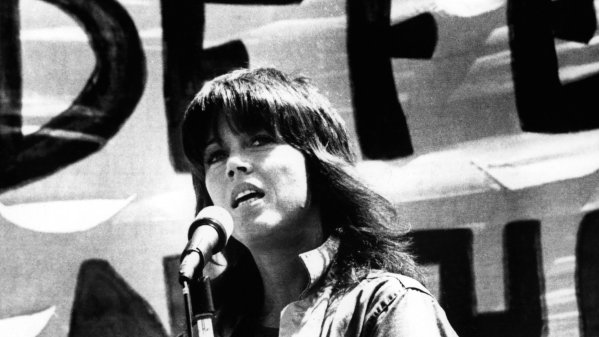 Jane Fonda in Five Acts Is a Candid Portrait of a Hollywood Truth-Teller
Next Up: Editor's Pick