What to Know About the Original A Star Is Born—and the Other Versions, Too

Critics and moviegoers alike are excited, to say the least, about Friday’s theatrical release of A Star Is Born — but this is not the first time the story will play on the big-screen. The latest version, starring Lady Gaga and Bradley Cooper (who also directed), is the fourth in almost a century.

Each of the film’s three previous iterations starred a female icon of its moment — not to put pressure on Lady Gaga, whose limited film acting credits include 2013’s Machete Kills and 2014’s Sin City: A Dame to Kill For. She plays a waitress whose life is changed by fame after a country-music star spots her singing in a bar.

A Star is Born is already set to be a huge hit after garnering critical acclaim after its August premiere at the Venice International Film Festival. And, if the movie’s previous versions are any indication, Oscars may be coming: Each of the three A Star Is Born movies was nominated for (and two of the three films won) Academy Awards.

However, not every iteration of the film had the same style, plot or music. In fact, the original was not even a musical. Here’s what made each of the film’s adaptations special — and what contemporaneous TIME critics had to say about them.

A poster for the original "A Star Is Born," 1937.
United Artists/Kobal/REX/Shutterstock

The Plot: The plot of the first film differs the most from the following renditions, as the lead character’s passion is for acting rather than singing. Janet Gaynor (1906-1984) plays Esther, who grew up on a farm in North Dakota. After Esther moves to Los Angeles to pursue acting, she meets Norman Maine (Fredric March), an alcoholic actor Esther looks up to.

What the Critics Said: A May 3, 1937, TIME review critiqued Gaynor, not only for her acting in A Star Is Born, but for her talent in general. March stole the show and lent the movie its “effectiveness”:

TIME’s critic also praised the film for containing “a magnificent shot which is possibly the best individual justification of Technicolor yet seen on the screen.”

The Music: The scoring of the movie, which was not a musical, was not nominated for an Oscar, despite its well-known composers. The music was written by Dorothy Dick and Max Steiner (of Gone With the Wind), with the full soundtrack sung by Buddy Clark.

James Mason and Judy Garland in "A Star Is Born," 1954.
Warner Bros/Kobal/REX/Shutterstock

The Plot: 1954’s A Star Is Born, directed by George Cukor, took inspiration from the original and showed Esther again as an aspiring Hollywood star. This time, the it-girl of the 1950s was Judy Garland (1922-1969), whose career had taken off with her role Dorothy in 1939’s The Wizard of Oz. Garland’s leading man was played by James Mason, a British actor known for his role in Hitchcock’s North by Northwest (1959).

What the Critics Said: TIME’s October 25, 1954 issue applauded her performance for her musicality and acting, highlighting the improvement in her skills:

The Music: The movie’s Oscar nominations included Best Original Song for the TIME-acclaimed “The Man That Got Away” and Best Scoring of a Motion Picture by Ray Heindorf. Heindorf later won the same award for his scoring of 1962’s The Music Man.

The Awards: Like her predecessor, Gaynor, Garland also lost the Best Actress in a Leading Role Oscar. She lost to Grace Kelly for her role in The Country Girl. According to Telegram!, a book of Hollywood history by Linda Rosenkrantz, Garland, who missed the Academy Awards because she was still in the hospital after giving birth to her son, was the favorite for that year’s coveted award. Disappointed with Kelly’s win, Groucho Marx sent Garland a letter, calling her loss “the biggest robbery since Brink’s.”

A promotional image of Barbra Streisand and Kris Kristofferson in "A Star Is Born," 1976.
Warner Bros/Kobal/REX/Shutterstock

The Plot: The 1976 adaptation of A Star Is Born — perhaps better known as the Barbra Streisand version — took the previous two films’ backdrop of Hollywood and turned its star into an aspiring singer rather than an actress. Directed by Frank Pierson, who co-wrote the movie with Joan Didion and John Gregory Dunne, the film opens with Streisand’s Esther is discovered by John Norman Howard (Kris Kristofferson), a rock star, as she performs in a bar. This plot line is the most similar to 2018’s rendition.

What the Critics Said: TIME didn’t love Streisand’s performance nearly as much as the magazine had appreciated her predecessors’ takes on the role. In a review headlined “Barbra, a One-Woman Hippodrome,” film critic Jay Cocks wrote that Streisand’s rock ‘n’ roll interpretation was questionable.

The Music: Despite Cocks’ concern, the music was perhaps more successful than the film. “Evergreen” also won a Grammy award as the Song of the Year, and the score, composed by Williams and Kenny Ascher, also won a Grammy. Streisand and Kristofferson both sang on the soundtrack, which reached No. 1 on the Billboard 200 chart in February of 1977.

The Awards: Despite some less-than-stellar reviews, the film grossed $80,000,000 in the United States box office and was nominated for four Academy Awards, winning one for Best Original Song. The winning song, “Evergreen,” was co-written by Streisand and Paul Williams.

The first two versions of A Star Is Born depicted Esther winning an Oscar award, but in this one, the character won a Grammy. Because the first two lead actresses lost those awards in real life, Barbra Streisand is the only lead to win the same kind of award for the film as her character does in her respective version. 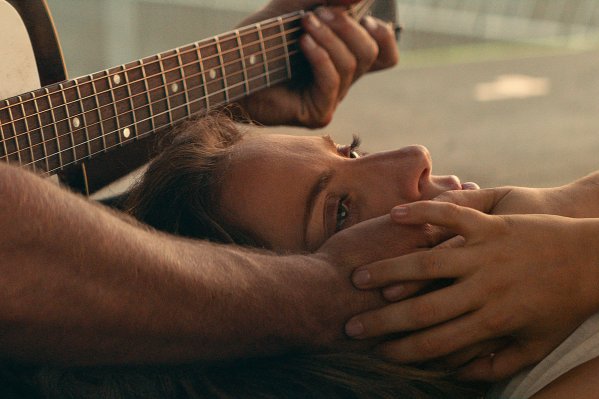 A Star Is Born Again and Again. Here's Why Bradley Cooper Finally Got It Right
Next Up: Editor's Pick