Former Vice President Joe Biden says Brett Kavanaugh accuser Christine Blasey Ford should be treated better than Anita Hill was if she chooses to testify before the Senate Judiciary Committee.

Biden, who was chairman of the Judiciary Committee in 1991 when Hill accused then-Supreme Court nominee Clarence Thomas of sexual harassment, told NBC’s Today show on Friday that he regrets the criticism Hill received for speaking out.

“I hope my colleagues learned from that,” he said. “[Ford] deserves to be treated with dignity. It takes enormous courage for a woman to come forward, under the bright lights of millions of people watching, and relive something that happened to her, assert that something happened to her. And she should be treated with respect,” and that she “should be given the benefit of the doubt and not be, you know, abused again by the system.”

“She should not have to go through the things Anita Hill went through,” he said later.

Ford has accused Supreme Court nominee Kavanaugh of trying to sexually assault her when they were both in high school more than 30 years ago. Kavanaugh has denied the alleged assault took place, as has another man who Ford said was present at the time.

Senate Republicans have said they plan to push ahead with a vote on Kavanaugh next week – with or without Ford’s testimony.

Kavanaugh is slated to speak about the allegations before the Senate Judiciary Committee on Monday. After initially saying that she wanted an FBI investigation before she testified, Ford’s lawyer said she could testify next week if the Senate would agree to “terms that are fair and which ensure her safety.”

President Donald Trump and Senate Republicans say that renewing an FBI investigation into Kavanaugh’s background will not happen. Biden said the accusation is serious enough to warrant in investigation by the FBI.

“I think they should do an FBI investigation. We did that for Anita Hill,” Biden said. “Most importantly, Anita Hill was vilified when she came forward by a lot of my colleagues, character assassination. I wish I could’ve done more to prevent those questions and the way they asked them.” 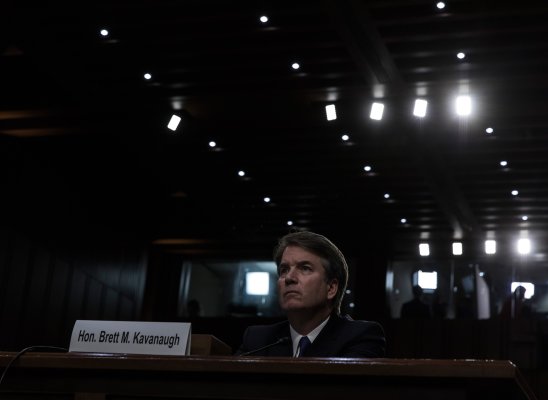 The Supreme Court Nomination Process Has Become a Disgrace
Next Up: Editor's Pick