Barbara Jordan, Barbara A. Mikulski, Carol Moseley Braun, Dianne Feinstein, Barbara Boxer, Maxine Waters, and Geraldine Ferraro, among others, on stage at the beginning of the Democratic National Convention in July of 1992.
Mark Reinstein—Corbis/Getty Images
By Olivia B. Waxman

Days after her accusation against Supreme Court nominee Brett Kavanaugh became public, psychology professor Christine Blasey Ford has decided to testify about her claim that he sexually assaulted her when they were in high school. She’s scheduled to speak at a hearing on Thursday, offering the Senate and the nation a chance to hear her story in her own words. The implications of her accusations — and those of a second accuser, Kavanaugh’s college classmate Deborah Ramirez, who also alleges sexual misconduct — could not only affect the makeup of the Supreme Court, but also the makeup of Congress and local legislatures alike, as political consultants say the allegations could affect female voter turnout in the upcoming 2018 midterm elections.

And there’s good reason to believe that what happens during these confirmation hearings could in fact have an important impact on candidates and voters. After all, it happened before.

Ford’s accusations against Kavanaugh call to mind those made by law professor Anita Hill, who testified in 1991 that Supreme Court nominee Clarence Thomas had sexually harassed her when they worked together. One of the key effects of Hill’s testimony was felt in the election cycle that followed her appearance. By setting a record for women elected to Congress, 1992 earned the nickname “the Year of the Woman” — and in fact, one of those women was Sen. Dianne Feinstein (D-Calif.), who was the one to escalate Ford’s accusations against Kavanaugh.

Many of the women who ran for office at the time said they found the courage to run after seeing Hill speak to the all-male Senate Judiciary Committee, and feeling that Hill did not receive the treatment she deserved.

“It was so stark, watching these men grill this woman in these big chairs and looking down at her,” Sen. Murray told former TIME correspondent Jay Newton Small for her book, Broad Influence: How Women Are Changing the Way America Works. Someone had to defend Hill and press Thomas further, she thought, and that meant women had to run for office.

Four women were elected to the U.S. Senate in 1992. California became the first state with two female Senators, between Feinstein and Barbara Boxer, also a Democrat. Washington elected Democrat Patty Murray; Illinois elected Carol Moseley Braun, the first female African-American Senator; and Maryland re-elected Democrat Barbara Mikulski, boosting the number of female senators from three to seven, as TIME reported back then. Meanwhile, a record 24 women won U.S. House seats that year, increasing representation to 48, up from 30. Down the ballot, women ran for and secured seats in their state legislatures, school boards and county commissions. (And in 1993, Texas sent Kay Bailey Hutchison to the Senate in a special election.)

The Year of the Woman was felt in the White House too. Outrage over the treatment of Hill fueled an “anti-incumbent mood in general,” as TIME reported that June, which was key to Bill Clinton winning the presidency. As the future First Lady Hillary Clinton said at an August American Bar Association function where Hill was receiving an award, ”All women who care about the equality of opportunity, about integrity and morality in the workplace, are in Professor Anita Hill’s debt.'”

“This has been declared the ‘Year of the Woman,’ the others having for millenniums belonged to the men,” Barbara Ehrenreich wrote for TIME in the lead-up to the election. “From Geraldine Ferraro in the East to Dianne Feinstein in the West, with plenty more in between, female candidates are challenging the principle that it takes a real man to bounce checks and deliver monologues on C-SPAN. Some observers are already heralding the feminist revolution in which, after centuries of producing the babies that male politicians are required to kiss and attempting to humanize such characters as George Bush and Michael Dukakis, women will finally seize power for themselves.”

In TIME’s post-election debrief on the results, the magazine reiterated how the Anita Hill hearings had played a role in that year’s elections:

Of course, the magazine added, there was a lot of hard work ahead for those women if they wanted to help achieve equality — not to mention a lot of long walks to the limited ladies’ room facilities at the Capitol.

“As for the losers,” the story continued, “plus all the women who felt they were too poor, too inexperienced or too young to run this time: nowhere is it written that 1994 need be the 218th Year of the Man.” As Sen. Mikulski once said more simply, and colorfully, about the limitations of the “Year of the Woman” characterization: “Calling 1992 the Year of the Woman makes it sound like the Year of the Caribou or the Year of the Asparagus. We’re not a fad, a fancy, or a year.”

While Hill’s testimony came a year before women won these elections, with enough time for new candidates to sign up to run; Ford allegations come in the walk-up to the midterms. Yet there’s once again evidence of an anti-incumbent mood, and already a record number of women are running for Governor and Congress in 2018, a “pink wave” mobilized by opposition to President Donald Trump. And while it may be too late to decide to run, but it’s not too late to vote. So if history is any indication, how the Senate Judiciary Committee handles Ford’s allegations in September could help determine what happens to many other women in November. 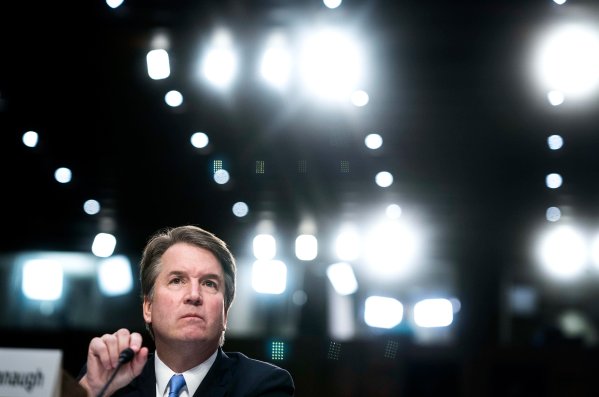 Brett Kavanaugh Can’t Be Trusted. We Know Because We Worked as Counsel to Senators When He Was in the Bush White House
Next Up: Editor's Pick