We might know James Corden best for his signature carpool karaoke sessions, but on Thursday night the British comedian and Late Late Show host proved he can still throw a political zinger or two.

During his recap of recent headlines, Corden brought up a new report regarding a meeting between President Donald Trump and Spain’s foreign minister, in which Trump allegedly suggested Spain should also consider building a wall to allay some of their problems.

“Trump is now making policy suggestions to Spain, or as he calls it, European Mexico,” Corden joked. “I like how Trump’s answer to everything is just: build a wall.” (Trump famously ran for office partially on the platform of building the border wall between the U.S. and Mexico, a contentious endeavor in his attempt to limit immigration.)

But there’s an even more surprising detail from Trump’s meeting with the Spanish minister that had Corden shaking his head: apparently, Trump suggested Spain build their wall through the Sahara Desert which, of course, is in Africa, not Europe. And no, that was not a joke.

“Trump’s not great with geography and borders,” Corden continued after revealing this baffling fact, “which is weird. Usually the only time Trump has problems understanding boundaries is with female employees.” Watch the full clip from Corden above. 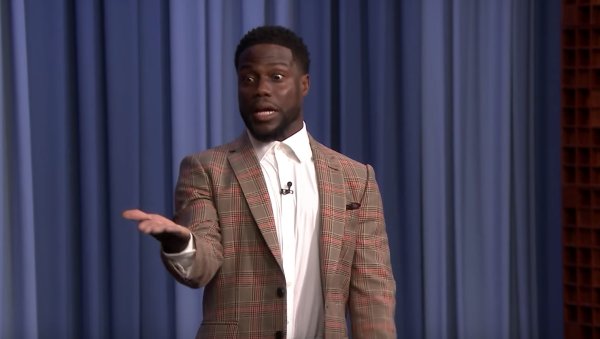 Kevin Hart Just Loses It Around Wild Animals
Next Up: Editor's Pick