Michelle Obama is ramping up her efforts to get Americans to the polls. On Thursday, When We All Vote, the non-partisan organization she co-chairs, released an emotional new ad that addresses all the excuses people make for not voting.

“Why should I vote? Nothing ever changes. The system is rigged,” the one-minute ad begins.

“Whether you’re trying to get dinner on the table after working a double shift, dropping baby off with Grandma, or studying for exams voting can feel like the furthest thing from your mind. You might even feel like it’s just not worth it,” Michelle Obama continues. “But that’s exactly what some people want you to think. The truth is, when we stay home, things stay the same or they get worse.”

The ad encourages citizens to register for and vote in the 2018 Midterm elections on Nov. 6. It will run digitally and on radio stations around the country.

“When we all vote, we get new ideas and new energy,” Mrs. Obama says in the ad. “We get leaders who share our values and listen to our voices. That’s how we change America.”

While President Barack Obama has already started wading into the politics of the 2018 election, Michelle Obama has made it clear she has no interest in jumping directly into the arena. “I’ve never had the passion for politics,” she said last April. “I just happened to be married to somebody who has the passion for politics, and he drug me kicking and screaming into the arena.”

But in her post-White House life she has taken on the issue of civic participation and low voter turnout head on.

Earlier this summer, she enlisted the help of an array of celebrities including Broadway star Lin-Manuel Miranda, singer Janelle Monáe, NBA player Chris Paul, country stars Faith Hill and Tim McGraw and actor Tom Hanks for a viral video about why it’s important to vote in every election — not just presidential races.

Through volunteer recruitment, changes to the registration process, and boosting conversations about the importance of voting, When We All vote hopes of getting citizens in all 50 states registered to vote and participating in elections.

On Sept. 22, the group will kick off a national “week of action,” which will feature nearly 2,000 events in 49 states. Obama will host two events in Las Vegas and Miami — both of which are in states that are home to pivotal U.S. Senate and gubernatorial elections — while her fellow celebrity co-chairs will lead rallies in Atlanta, Houston, Nashville, Pittsburgh, Detroit and Los Angeles.

The goal right now, is to get as many people registered and ready as possible. The group has made registration easy on its website and also launched a new text-to-register feature that can be accessed by sending the message “WeAllVote” to 97779. But starting in October, the group will shift gears and focus on get-out-the vote efforts.

Turnout during midterm elections is notoriously paltry. In 2014, only around 36% of eligible voters actually turned out to vote—the lowest share of the voting population to cast their ballots since World War II.

Turnout during the 2018 primary elections has been up for both parties, but participation is up significantly among Democrats, who have seen a 78% boost in turnout when compared to the last midterms, according to one analysis. Democratic ballots have reportedly accounted for 53% of all ballots cast during the primary season. If that trend holds during the general election, Democrats could be on track for a wave election similar to 2006, when they last took control of the U.S. House of Representatives.

Beyond this year’s midterms, the group aims to change the culture around voting and keep citizens continuously engaged. 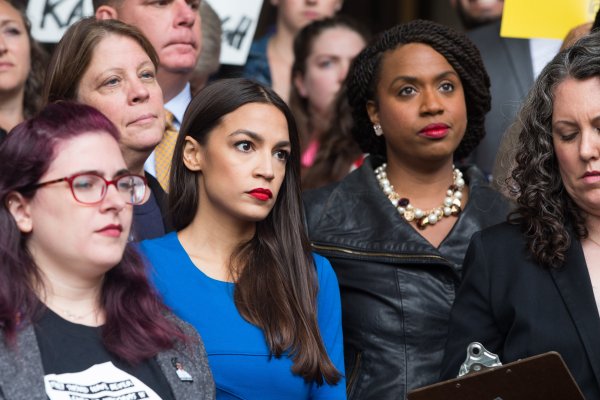 Here Are Some of Women Who Made History in the Midterm Elections
Next Up: Editor's Pick